'No matter what level of income, what level of life you have, everybody deserves a great shopping experience,' says Georgia Main Food Group's Mark McCurdy
Sep 9, 2019 3:00 AM By: Brandon Barrett 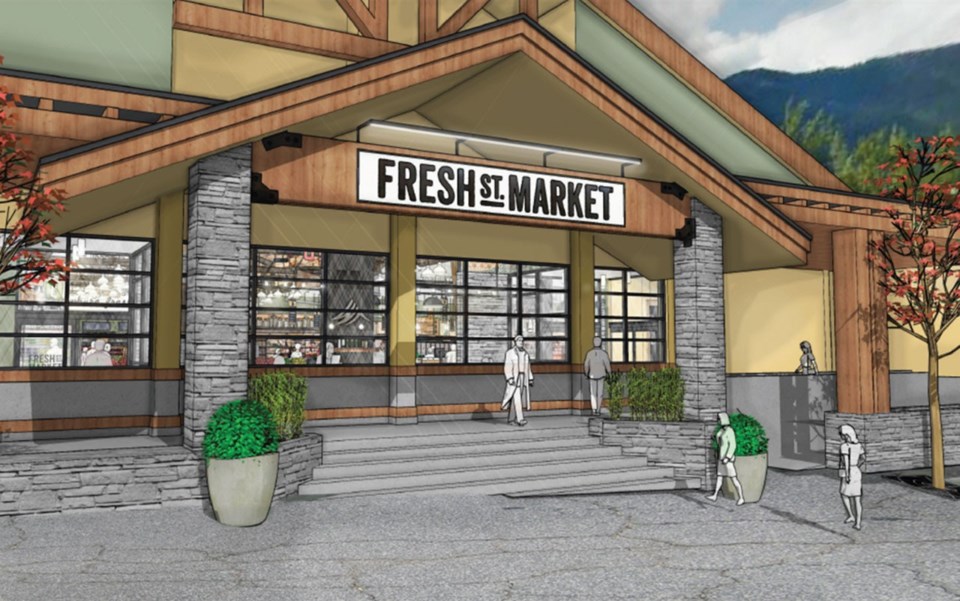 the fresh-maker An artist's rendering of the design for the exterior of the Fresh St. Market in Marketplace, which is currently undergoing renovations. image submitted

You may have noticed some big changes at Whistler's Marketplace grocery store over the past few weeks—chief among them, a new name on the front entrance sign: Fresh St. Market. The former IGA is currently undergoing a makeover intended to modernize the longstanding store for an evolving customer base.

"We developed Fresh St. Market, first and foremost, six or seven years ago in West Vancouver and the idea of Fresh St. Market was to bring a different way of shopping for our customers," explained Mark McCurdy, VP of retail operations for Georgia Main Food Group, which now counts four Fresh St. Markets in the province.

The concept is designed to accommodate shoppers who are increasingly spending less time in the kitchen, but still want a quality product, McCurdy said.

"We find more people are shopping fresh many times a week as opposed to once a week. We really wanted to develop a shopping experience like that very similar to what you would find at a public market, like Granville Island," he noted.

McCurdy said most consumers these days shop around "the centre of the plate," meaning they select their main course and build a meal around it. Fresh St. Market is designed to accommodate that impulse by offering a wider range of fresh-made foods and hard-to-find products.

"We believe that within everybody there is a foodie—and it can be large or small," McCurdy said "We also understand that people like to cook, but maybe don't have the time to do all of the cooking, so we have areas that offer different product mixes to make it easier for you to provide a meal."

The store is also undergoing a significant physical transformation. Along with renovating the bakery and deli departments, the produce section has been relocated, and space has been opened up on the left side of the store for additional stand-up fridges for more prepared foods made in-house.

And those pesky, frustrating diagonal aisles? Those are going, too (mostly).

"The other aisles on the righthand side of the store will be all lined up differently," McCurdy said. "Some of them will still be on angles, but it will truly be an easier shop."

As part of the renovations, the building's landlord is also completing repairs on the store's roof.

"There's just so much going on," McCurdy said. "But it's sort of like pulling the Band-Aid off: might as well do it all at once instead of tease it through."

Having skied Whistler since the late '70s, McCurdy said he "understands the Whistler market" and wants to renew the company's focus on locals of all stripes. The store is already planning on taking part in more community events, such as Cornucopia in November, and McCurdy said the goal is to "welcome back a lot of our customers that maybe have decided to shop somewhere else.

"We want to embrace them," he continued. "We want to bring them in and say, 'Look, here's who we are now. I think you're going to really love the grocery-shopping experience because we believe no matter what level of income, what level of life you have, everybody deserves a great shopping experience, so that's what we're going to try to provide here."

Having begun in mid-July, McCurdy said the renovations are slated for completion in November.

"It's going to be pretty exciting when people walk in there for the first time," he added.

"It's a fun approach to food that we think is going to really resonate with our customers."