Marnie Melsted's cooking has always had an international flavour to it. But the Whistler Food Co. chief dietician, chef and owner has expanded her horizons in recent years.
May 31, 2017 6:00 PM By: Dan Falloon 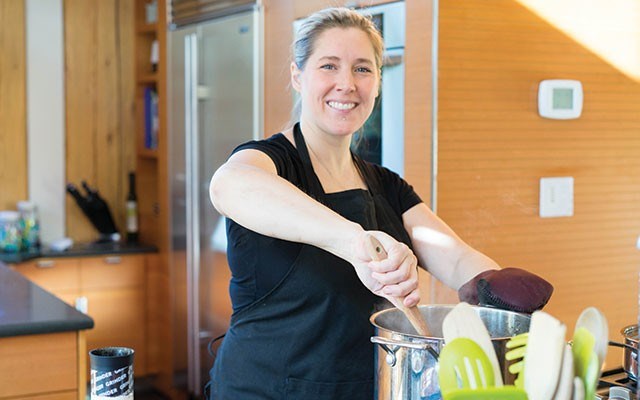 Marnie Melsted's cooking has always had an international flavour to it.

But the Whistler Food Co. chief dietician, chef and owner has expanded her horizons in recent years.

"My style of cooking has always been simple and fresh and I really love Middle Eastern flavours and recipes," she said, noting that she uses plenty of spices and often makes kebabs and handmade flatbreads. "I love serving foods family style on big shared platters."

Melsted, who rebranded her initial venture, Marnie's Cooking, recently entered a partnership with the Whistler Athletes' Centre (WAC) to help keep a wide variety of high-performance competitors nourished and fuelled.

"We prepare them familiar foods that are culturally appropriate. It's balanced nutrition, but it's really heavy on plant-based recipes and lean proteins. These athletes are on the road for really long periods of time so they need foods that are comforting, nutritionally dense and easy on the digestive system," she said.

"Sustainable meats," she added, "they are the perfect quick meal along with a salad."

In ensuring that athletes from all over the world can do their best, including those from Korea, China, Jamaica and Switzerland, Melsted said she's worked hard to get beyond her preferred Middle Eastern and Italian methods to give them a taste of home.

"They need foods that are familiar. We're cooking them Chinese food. We're cooking them Korean food. We're getting the barbecue out — the Koreans like to get involved and barbecue their own food with us. We're using lots of different types of Asian hot sauces and things that they use at home, like chopsticks," she said. "We also do some North American-style foods for them and they do appreciate that."

Another challenge can be breakfasts, as Melsted said many cultures often approach the day's first — and most important — meal, much differently than North Americans do.

While she cooked primarily for sliding athletes during the winter, Melsted is also working with freestyle athletes, runners, baseball players, volleyball players and cyclists.

"Regardless of the type of athlete that they are, the principles of what they're eating stays the same. It's balanced eating. Not everybody needs a large amount of protein. That's the misconception, that we need massive amounts of protein to build and store muscle. The protein that we do serve is quality and it's lean and it's flavourful. We put a big emphasis on fresh veggies and fruits, so there's always big salads, and I like to incorporate the carbohydrates into the salads using grains, making Greek barley salads and fresh quinoa salads and so on," she said.

In addition to her plethora of fresh selections, Melsted is also working on some frozen options that could be handy for athletes returning late to WAC's Cheakamus Crossing location, especially considering there are no late-evening options open.

Among her offerings are a take-and-bake pizza, though it's much more nutritionally sound than your typical store-bought pie.

"Frozen pizzas are always your go-to quick meal but you know it's not the healthiest option. They're usually high in sodium, low in fibre and pretty greasy," she said. "But the frozen pizzas I'm going to make are going to be fresh-frozen, so a take-and-bake style. They'll be full of fibre, have lots of roasted veggies, and have different types of sauces like a walnut-parsley-pesto sauce.

"You'll feel like you're eating pizza but it'll be good for you."