FREE WILL ASTROLOGY Week of May 31st

ARIES (March 21-April 19): "Let's waltz the rumba," said jazz musician Fats Waller, suggesting the seemingly impossible mix of two very different types of dancing. That's an excellent clue for you to follow up on, Aries.
May 30, 2012 9:00 PM By: Rob Breszny 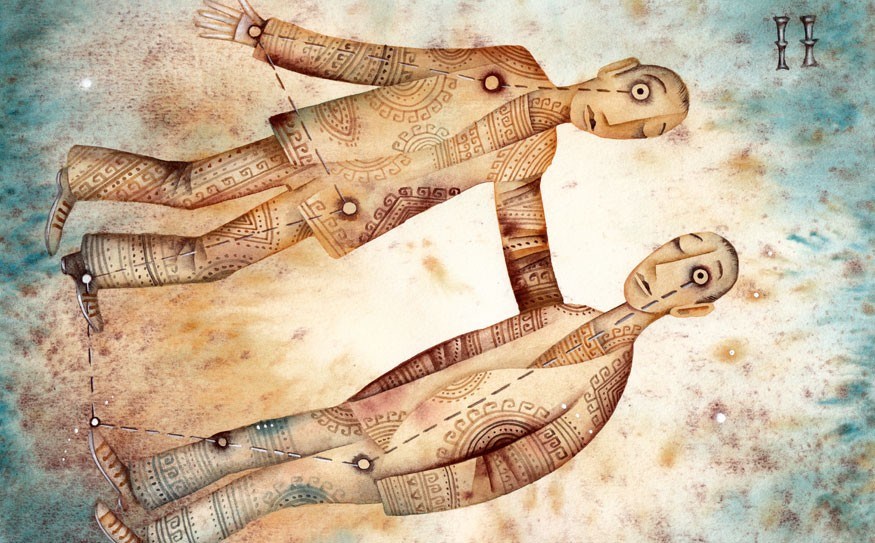 ARIES (March 21-April 19): "Let's waltz the rumba," said jazz musician Fats Waller, suggesting the seemingly impossible mix of two very different types of dancing. That's an excellent clue for you to follow up on, Aries. I suspect that in the coming week you will have an unusual aptitude for hybridization. You could do folk dancing and hip-hop moves simultaneously. It will make sense for you to do the cha-cha as you disco and vice versa. You'll have a knack for bringing the spirit of belly dance into the tango, and for breakdancing while you do the hokey-pokey.

TAURUS (April 20-May 20): Have you been feeling a warm fuzzy feeling in your money chakra? I hope so. The cosmos recently authorized you to receive a fresh flow of what we might call financial kundalini. Your insight into money matters should be increasing, as well as your ability to attract the information and influences you need to refine your relationship with prosperity. It may even be the case that higher levels of economic luck are operating in your vicinity. I'm not saying you will strike it rich, but you could definitely strike it richer.

GEMINI (May 21-June 20): Your core meditation this week is Oscar Wilde's belief that disobedience is a primal virtue. Be ingeniously, pragmatically, and cheerfully disobedient, Gemini! Harness your disobedience so that it generates outbreaks of creative transformation that improve your life. For inspiration, read this passage by Robert Anton Wilson: "Every fact of science was once damned. Every invention was considered impossible. Every discovery was a nervous shock to some orthodoxy. Every artistic innovation was denounced as fraud and folly. The entire web of culture and progress, everything on earth that is man-made and not given to us by nature, is the concrete manifestation of someone's refusal to bow to Authority. We would be no more than the first apelike hominids if it were not for the rebellious, the recalcitrant, and the intransigent."

CANCER (June 21-July 22): "Some people tell me I'd invented the sounds they called soul," said musician Ray Charles, "but I can't take any credit. Soul is just the way black folk sing when they leave themselves alone." I urge you to experiment with this idea, Cancerian. In my astrological opinion, you need to whip up a fresh, hot delivery of raw soul. One of the best ways to do that might be to leave yourself alone. In other words, don't badger yourself. Don't pick your scabs and second-guess your enthusiasms and argue yourself into a knot. Create a nice big space for your original self to play in.

LEO (July 23-Aug. 22): "Where's the most convenient place to discover a new species?" asks The Second Book of General Ignorance. What do you think the answer is, Leo? The Amazon Rainforest? The high mountainous forests of New Guinea? Northwest Siberia? None of the above. In fact, your best chance of finding a previously unidentified life form is in your own garden. There are hundreds of thousands of species that science still has no knowledge of, and quite a few of them are near you. A similar principle currently holds true for your life in general. It will be close to home that you are most likely to connect with fascinating exotica, unknown influences, and far-out adventures.

VIRGO (Aug. 23-Sept. 22): Now and then my readers try to bribe me. "I'll give you $1,000," said a recent email from a Virgo woman, "if you will write a sequence of horoscopes that predict I'll get the dream job I'm aiming for, which will in turn make me so attractive to the guy I'm pursuing that he will beg to worship me." My first impulse was to reply, "That's all you're willing to pay for a prophecy of two events that will supercharge your happiness and change your life?" But in the end, as always, I flatly turned her down. The truth is, I report on the music of the heavenly spheres, but I don't write the music myself. Still, I sort of admire this woman's feisty resolve to manipulate the fates, and I urge you to borrow some of her ferocity in the coming week.

LIBRA (Sept. 23-Oct. 22): A solar eclipse happens when the moon passes in front of the sun and blocks much of its light from reaching our eyes. On a personal level, the metaphorical equivalent is when something obstructs our ability to see what nourishes us. For example, let's say you're in the habit of enviously comparing your own situation to that of a person you imagine is better off than you. This may blind you to some of your actual blessings, and diminish your ability to take full advantage of your own talents. I bring this up, Libra, because you're in an especially favourable time to detect any way you might be under the spell of an eclipse — and then take dramatic steps to get out from under it.

SCORPIO (Oct. 23-Nov. 21): Some secrets will dribble out. Other secrets will spill forth. Still others may shoot out and explode like fireworks. You won't be bored by this week's revelations, Scorpio. People's camouflage may be exposed, hidden agendas could be revealed, and not-quite-innocent deceits might be uncovered. So that's the weird news. Here's the good news: If you maintain a high level of integrity and treat the brouhaha as good entertainment, you're likely to capitalize on the uproar. And that's your specialty, right?

SAGITTARIUS (Nov. 22-Dec. 21): If you go to a psychotherapist, she may coax you to tell stories about what went wrong in your childhood. Seek a chiropractor's opinion and he might inform you that most of your problems have to do with your spine. Consult a psychic and chances are she will tell you that you messed up in your past lives and need a karmic cleansing. And if you ask me about what you most need to know, I might slip you some advice about how to access your untapped reserves of beauty and intelligence. Here's the moral of the story, Sagittarius: Be discerning as you ask for feedback and mirroring. The information you receive will always be skewed.

CAPRICORN (Dec. 22-Jan. 19): The state of Kansas has a law that seems more confusing than helpful. It says the following: "When two trains approach each other at a crossing, both shall come to a full stop and neither shall start up again until the other has gone." From what I can tell, Capricorn, a similar situation has cropped up in your life. Two parties are in a stalemate, each waiting for the other to make the first move. At this rate, nothing will ever happen. May I suggest that you take the initiative?

AQUARIUS (Jan. 20-Feb. 18): Should you get down on your knees and beg for love and recognition? No! Should you give yourself away without seeking much in return? Don't do that, either. Should you try to please everyone in an attempt to be popular? Definitely not. Should you dilute your truth so as not to cause a ruckus? I hope not. So then what am I suggesting you should do? Ask the following question about every possibility that comes before you: "Will this help me to master myself, deepen my commitment to what I want most, and gain more freedom?"

PISCES (Feb. 19-March 20): Do you know why flamingos have their distinctive orange-pink colour? It's because of the carotene in the shrimp and other food they consume. If they change their diet, their feathers turn dull grey. That's a dramatic example of the adage, "You are what you eat." Let's use it as a prompt to contemplate all the stuff you take into the holy temple of your body, Pisces. Not just the sandwiches and chocolate bars and alcohol, but also the images, sounds, ideas, emotions, and energy you get from other people. Is the cumulative effect of all those things giving you the shape and colour and texture you want to have? If not, this would be a good time to adjust your intake.