A kingdom of dance as the Vibe Tribe perform new work 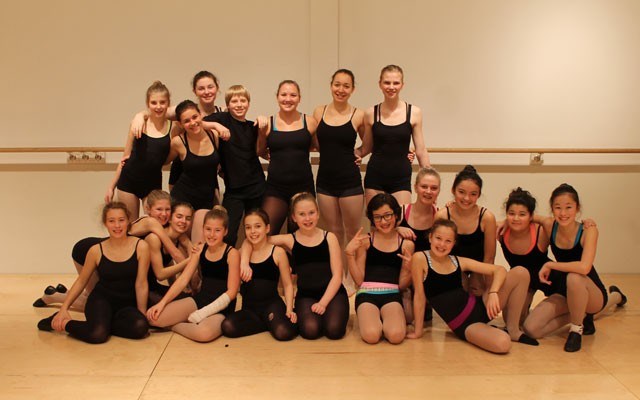 A large portion of Vibe Tribe Dance Team is running through their routine and it's going well.

Perhaps "running" isn't the right word. It's "flowing", like water. The 18 young women and one young man are taking the jazz music and their step-ball-changes to the next level in synchronized movement and they're nailing it. The timing is great.

Heather Thom, who runs The Vibe Dance Centre with her husband Jeremy, has been putting them through their paces for their latest winter show.

The Kingdom of Kaldriss and the Lost Spirit is an original slice of musical theatre written by the Thoms and will be performed by the Vibe Tribe at the Whistler Conference Centre on Friday, Dec. 20 and Saturday, Dec. 21 at 6:45 p.m.

"We try with our winter shows each year, they're not Christmas shows at all, but we try to have the spirit of the holiday, the feeling of that, to spread a positive vibe for the holidays, so we try to gear our stories towards that."

'Tis the season for pantomimes and The Kingdom of Kaldriss fits in that tradition.

"This year our story takes place in a fictional kingdom, the kingdom of Kaldriss," she explains. "The people are ruled by a queen there and are celebrating their own version of holiday season in their own way. They stumble upon information that tells them their queen has a dark secret from her past that affects them greatly. I can't say more, I don't want to give it away!"

Making musical theatre from scratch, that's tough work. How far in advance do they plan it?

"It's funny. It gets a little tighter every year, to be honest. We try to go bigger and better every year, I'm challenging myself. I want to top last year. This winter show, we actually only have a couple of weeks to pull it together," she says.

"We just started choreography with the kids two weeks ago on Tuesday. They're just dancing and dancing and dancing. It gives them an amazing experience and they are learning something where they have to remember it, practice it, perfect it and perform it within a short span of time. Not only dance but they do acting as well, they have lines to learn. Then there's staging and costuming.

"It's a quick process for the winter show usually, two to three weeks, but it's an amazing experience for them. It teaches them responsibility and the discipline to pull it off."

Overall, there are 40 youngsters in the Vibe Tribe this year, ranging in age from six to 18. The Vibe Tribe is just one part of the dance studio's program, but it is the most professional — all the youngsters involved have to audition to take part.

At the moment, the older teens are putting in upwards of 20 hours a week in rehearsals, dancing intensely from after school until well into the night. But those doing it say it's worth it.

Ocea Grant, 14, has been dancing with the Vibe Tribe for five years. Usually she practices 11 hours a week, she says, but in preparation for the show it has been 15-20 hours.

"The preparations for the show have been really fun. It's hard work but it pays off in the end, for sure. The rehearsals are awesome, that's for sure," Grant says.

Cayley Clark, 12, has been dancing with the Vibe for three years and says dance would be a "really fun career."

She says: "I feel like since we are getting older, it is getting intense and challenging. But it is fun and the challenge is nice, and Heather is a really awesome teacher. We're all family and this is our second home."

Thom can't emphasize enough that the hard work of the dancers pay dividends.

"They're the kids for whom dance is a passion. They want it to be a big thing in their lives and they audition to come," she says. "They train pretty hard; there are mandatory classes they have to take.

"And they pull it off. They work so hard and they come together really well. They work their little butts off until the show and then they are so proud of what they've accomplished. I think it's a good life lesson for them, (to do) 'the quick' (having to prepare for a show quickly), especially if they want to doing anything in the performance realm."

The Vibe Tribe also performs at the Seniors' Gala at the Fairmont Chateau Whistler annually, at the World Ski and Snowboard Festival, and at the New Year's Eve event at the conference centre.

"They're kids, but they are very professional and it's an amazing, entertaining night. The people who don't think they'll like it, will like it."