A tale of rich kids and poor kids 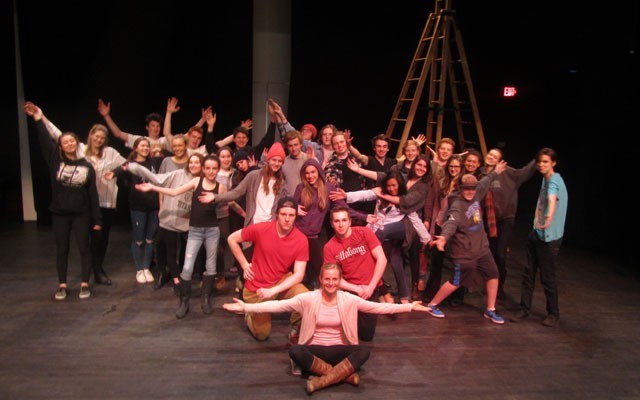 The students of Whistler Secondary School (WSS) are exploring the world of rich and poor kids in a new stage version of The Outsiders.

The Outsiders is a play about gangs, friendship and alienation. The original novel was written by S.E. Hinton, who was just 15 when she started writing it.

It follows two rival groups of teenagers, the Greasers and the Socs.

The coming-of-age story is told by 14-year-old Ponyboy Curtis, a Greaser who lives with his brother and friends on the wrong side of the tracks in 1960s Oklahoma.

It was turned into a film starring Tom Cruise, Patrick Swayze and Diane Lane in 1983.

WSS teacher Sandra Doulis has led the theatre program at WSS for five years, with students auditioning for this year's show in September and rehearsing it from October.

"The Grade 8s study the novel and I really like the message that comes with The Outsiders — that we all come from different places but we are human beings," she says.

"And there is also the idea of 'staying gold,' the idea of staying young and noticing the world around you. I think nowadays with technology as a source of distraction, I really like the message of being cognizant of other people and nature.

"It's also an adolescent play. It's easy to cast, there are no parental roles. And the kids really like the Greasers and Socs, those types of roles appeal to them."

About 50 students are taking part, with 30 in the cast, and includes a four-piece rock band playing music from the mid-1960s.

"This year I added the music element to the theatre performance program for the first time. I had (teacher and musician) Jeremy Thom come in and do some sessions with them," Doulis says.

Money from last year's grad class' fundraising was awarded to update the musical instruments, which Doulis hope to make use of with the students, to grow the music and band program.

"Music is the next component," she says.

Doulis adds that she adapted the script to add more parties, music and cheerleading scenes.

The WSS theatre program is a comprehensive experience for the students. Those not on stage telling the story through acting are working behind the scenes as set and costume designers, or learning lighting, sound and staging techniques at the arts centre.

Grade 12 student Shayna Ross-Kelly plays Soc Cherry Vallance, the female lead character who is caught up in the drama of the two sides.

"We're excited that we're almost there with it. Everyone put so much work into it," Ross-Kelly says.

"The play is so cool. We all study it in high school. It's eye opening, especially for younger kids. They are able to see (characters) their own age having such a hard time. We all know that the class struggle is real. But in Whistler, we don't get exposed to it as often as most kids do. So it's a cool play for our town to put on especially, because it opens up our eyes to that element of struggle."

This is Ross-Kelly's fourth year performing in Doulis' productions.

She paid tribute to importance of the theatre program to her development of confidence.

"Acting kind of saved me. It expanded my social skills and now I'd say I'm pretty great at interacting with people," Ross-Kelly says.

And she has great things to say about her cast mates and having music onstage.

"The band is so spectacular. It's so cool that we have a student band this year."

She plans to perform improv at university and "have acting as a hobby."

There will also be a free matinee for Grades 6 and 7 students from Myrtle Philip and Spring Creek Community Schools on Thursday, March 10.