The 23rd annual Bizarre Bazaar set for this Friday and Saturday at Whistler Conference Centre
Nov 23, 2011 8:31 AM By: Vince Shuley 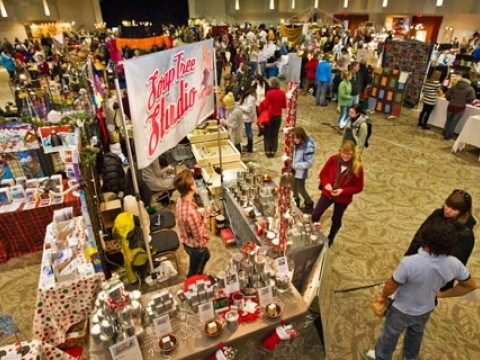 Now in its 24 rd year, this weekend will feature 99 vendors, half of which are attending for the first time. The venue was moved to the current location at the Whistler Conference Centre in the mid '90s after it exceeded the capacity at the Myrtle Phillip Community School. Recent years have seen over 5,000 visitors over the weekend.

The most notable success story from the Bizarre Bazaar in recent years has been Nonna Pia's balsamic reductions. Norm Strim began making his own genuine reductions at home 15 years ago. With his wife, Natasha they made their local debut at Bizarre Bazaar in 2007.

"We got a nudge from our friends that we should try to sell it locally," said Strim.

"We got accepted into the Bizarre Bazaar Christmas Show, but we didn't have anything to sell.

"We spent the next month making around 1,000 bottles of reductions and we sold about $7,500 worth over the weekend."

After a successful launch, they began to approach local retailers. Once their product was on the shelf they had to expand into a commercial kitchen. Norm quit his day job soon afterwards and began producing his herb and fruit-infused reductions full time.

Making a genuine reduction is very time consuming with each batch starting with balsamic vinegar aged six years from Modena, Italy. The Strims now tour around the country attending markets throughout the year. They sell Nonna Pia's to over 200 retail stores, reaching across Canada and recently expanding into the Pacific Northwest of the U.S. They also sell directly online.

"We have spent a lot of time promoting to the markets, educating people on our product and getting them to taste it," said Strim.

"If people see our product on the shelf and know nothing about it, they are less likely to spend $15.99 to try it.

"The 2007 Bizarre Bazaar was definitely a turning point for us. Without that show we probably wouldn't have pursued the business. Getting the positive feedback gave us the confidence to approach stores and begin producing and selling commercially.

"We were thinking about starting a little business to save for a holiday and it has turned into this."

Unique is what defines the Bizarre Bazaar, each artisan dedicates themselves to their craft to produce hand made wares.

Hiroko Takoya will be featuring her collection of contemporary weaved baskets, while Julia Vagelatos will have her collection of "Love Jules Leather," a variety of hand-crafted leather styles including shoes, jewelry and accessories.