Action! (and no sleep) 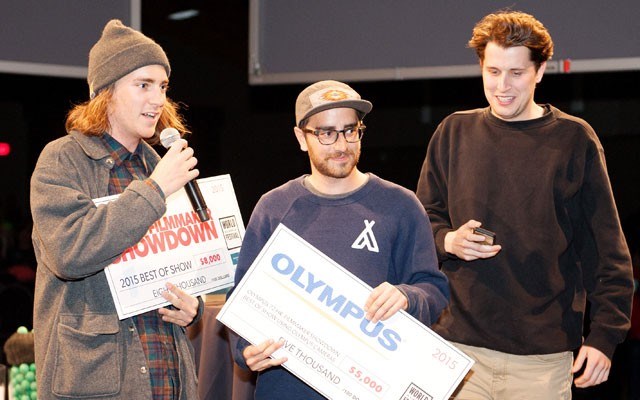 Anyone who has taken part in the Olympus 72 Hour Filmmaker Showdown can tell you that it is truly the agony and the ecstasy.

The 15th annual competition kicks off on Friday morning, April 8, and is followed by a weekend of little sleep, occasional food, non-stop filming, editing and storytelling — hopefully ending with a wonderful short film being submitted to judges before Monday morning's cutoff.

And, yes, teams run to the finish line. A minute late and you will be cut from the competition.

Six-to-10 finalists are then selected and screened in front of 1,000 at the Whistler Conference Centre. The winner is named. Much merriment and drinking follows.

And this year's competitors will compete for $10,000 in prizes.

One of the key arts events of the World Ski and Snowboard Festival (WSSF), the filmmaker's showdown has 30 teams so far this year.

Jaime Kerrigan, WSSF's multi-media events producer, says more are expected in the next week before the competition begins on April 8.

"There are always a few teams that turn up on the day, and as long as we have enough space they can register on the spot," Kerrigan says.

"Anyone can submit, all genres are welcome. This event is a great opportunity to give a spotlight chance to aspiring filmmakers in the area. It's a great event to take part in, whether you make it to the finals or not. It's a fun time."

The films must be three to five minutes long.

Kerrigan says there are no big changes for the competition this year.

"It's a formula that works and is always really exciting," she says.

Last year's winner Ben Geisbrecht is returning to defend his title, along with his teammates Jordan Ettinger and Charles Nasby.

The Vancouver filmmakers didn't write the script for their comedy Grandpa's Treasure Trail in advance, which is allowed.

"Last year, we didn't really have any plans going into it," says Geisbrecht.

"We had the idea of a treasure map and we wanted to incorporate the prop (part of the competition's rules is to use in the story an object selected by organizers)."

Geisbrecht and company won the $8,000 first prize and the People's Choice Award.

They also took home an extra $5,000 for shooting the five-minute short on Olympus film equipment.

They plan to use the same formula this year — wait to find out what the prop is and then let 'er rip.

"We can concentrate on what we're seeing, taking it shot for shot. Then we can create a video that revolves around the prop, if anything. We want to have that be the main feature of our film again. If we pre-write a script, then it's a little harder to add the prop into it," Geisbrecht says.

"A lot of film people are used to all that structure, especially if they've been to film school and worked on big films. They like all that preplanning.

"But you only have three days to do it from scratch."

"It's funny, last year we stayed with a friend and all the shots you see in Grandpa's Treasure Trail were filmed within 500 feet of his front door. They look like diverse shots but it was shot within a close radius.

"We'd get up, go have some breakfast, go outside and take a few shots, come back and have a couple of beers."

The crunch mode came the last night in the editing suite.

"Until that point we were relaxed and trying to enjoy the process. It's an important thing to do. Keep it simple, concentrating on a rounded story and good shots," Ettinger says.

Winning the competition last year encouraged Geisbrecht, Ettinger and Nasby to enter more events, including a 24-hour film competition in New York, for which they were finalists.

"It was an international competition, which was great," Ettinger says.

"A lot of the times we work separately throughout the year and for certain things we come together for competitions like this."

And Nasby now creates comedy shorts, their work can be see on Instagram under nasbybrothervideos.

Tickets are $27 and are still available for the night, Kerrigan adds, and can be purchased at www.wssf.com.