All eyes in the air

Juggling duo, the Gizmo Guys, entertain with on-stage antics, quick quips and jaw-dropping tricks
May 8, 2009 7:49 AM By: Holly Fraughton 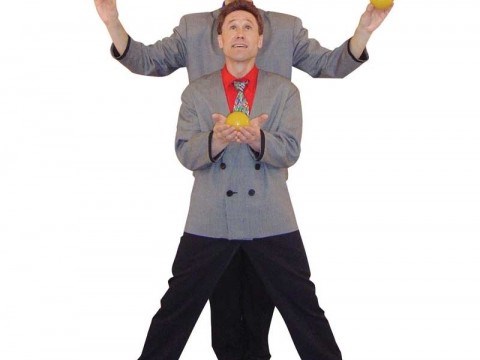 Juggling may be just a neat party trick for some, but for Allan Jacobs and Barrett Felker, it's turned into a career, and quite a successful one at that.

The New York-based duo is now known to audiences around the world as The Gizmo Guys, a comedic team of jugglers who have been performing together for over 22 years, playing gigs around the world in just about every imaginable venue - cruise ships, theatres and conferences - and even teaching their skills at renowned French and Canadian national circus schools. They've appeared before well over a million people in more than 2,500 live performances, plus millions more on television.

"We have even traveled outside of North America quite a bit - Hong Kong, Singapore, Japan, France, Chile, Saudi Arabia and Cache Creek to name a few. If we are in front of a good audience though, it doesn't matter much if it is in front of a few hundred school kids, in a beautiful theatre or at a corporate event," Felker said. "We've been touring in B.C. since we started working together in 1987 and one of the highlights for us has been seeing some of the most beautiful scenery in the world. It's a pretty good way to make a living now that I think about it."

Felker was taught to juggle by his cousin at the age of 15, while Jacobs learned from his college roommate when he was 21.

"That was in the mid-70s and there was a bit of an explosion at the time in terms of people being interested in juggling," Felker recalled. "At first it was more of an athletic pursuit than anything else. We were all trying to learn harder and harder tricks in a friendly, competitive spirit. It was only much later when we started performing - individually at first and then as part of other groups - that we started adding comedic elements."

They each mastered the basics easily, and then spent years developing individual solid skill sets that would enable them to entertain audiences for the duration of an entire show.

Then, in 1977, the two met at a juggling festival in Newark, Delaware and decided to team up.

"It wasn't much of a career at first," Felker said. "We both started as street performers passing the hat. From there we started getting paying shows. But it was a long process."

Regardless, their goal wasn't to juggle their way to the top.

"We didn't get into this line of work to be famous," Felker said. "Working has always been a way to support our habit more or less. We are among the lucky people in that we get to do something we love for a living."

Today, after 22 years of performing together, they've perfected their routine, which has proven to appeal to everyone from little kids to grandparents, with a combination of on-stage antics and quick quips to accompany their jaw-dropping tricks.

"Ultimately, an audience is interested in who we are on stage," Felker said. "I don't think you can hold an audience for an hour just by showing them juggling tricks. We need to be able to interact with the audience as well as create a relationship with each other."

Last week, the Gizmo Guys had shows in Mississippi, Illinois and Nebraska before making their way to Whistler, where they're taking the stage at MY Millennium Place as part of the Whistler Arts Council's annual Performance Series.

"The more people we have at the show, the more fun it will be for everyone," Felker said. "Come on out. You won't regret it."