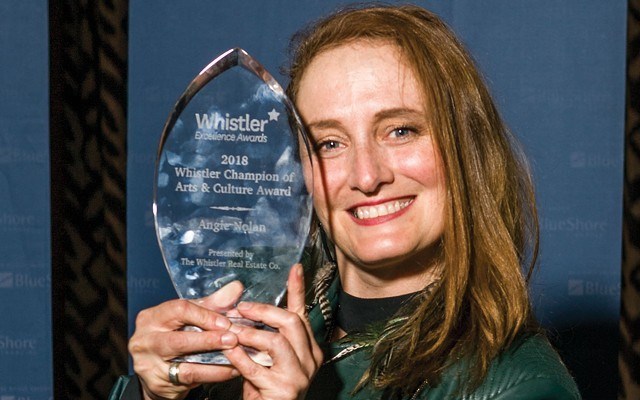 Angie Nolan, after winning the Champion of Arts and Culture award last month. Courtesy of the Whistler Chamber of Commerce

Angie Nolan is on a roll.

The Whistler filmmaker won a second award in as many months after Women in Film and Television Vancouver (WIFTV) announced she was one of 12 recipients of their Spotlight Award this year. That comes on the heels of Nolan being named Champion of Arts and Culture at the Whistler Excellence Awards in April.

More specifically, Nolan will be presented with the Capilano University Film Centre Leadership in Education Award at a Vancouver ceremony next month. “The Leadership in Education Award is presented to a screen industry teacher who has demonstrated a commitment to creating opportunities for and sharing expertise with female students within an academic or professional development context,” WIFTV says in a release. “Starting as a volunteer, Angie Nolan is now the Director of Industry Programming and the driving force behind the Summit and Talent Programs at (the) Whistler Film Festival.”

WIFTV is a not-for-profit society that works to advance, celebrate and promote the careers of women in film. The gala ceremony for the awards is set to take place on June 19 on Granville Island. To see the other winners visit womeninfilm.ca.

Are you an artist who longs to see their work adorn the streets of Pemberton?

If so, you’re in luck. The Village of Pemberton (VOP) is on the hunt for artwork for street banners and hydro boxes in town. The goal of the project is to “enhance public space and articulate Pemberton’s unique community culture, while honouring the traditional territory of Lil’wat Nation,” according to a release.

The banners and hydro boxes are all located along Portage Road/ Birch Street from Highway 99 down to Pemberton Meadows Road. “For cohesion throughout the downtown, one artist will be selected to provide artwork for both (locations),” the VOP says in the release.

Tips for artists submitting work for consideration: don’t use more than three main subjects on your banner, keep the subject matter large and simple, use bright colours and avoid text or signatures.

The call is open to both emerging and established artists. The person selected will be awarded an honorarium of $300 per design for up to four designs.

The deadline to submit is 4 p.m. on June 11. For more information visit pemberton.ca/government/news/post/call-for-artists-2018-banners-and-wraps.

Whistler Community Services Society (WCSS) has put a call out for artwork to feature on the cover of the organization’s annual Whistler Survival Guide.

The publication is released each fall—to coincide with the influx of newcomers arriving for the winter season—to share community resources and tips. Along with the cover, the art will also be featured inside the guide.

“The images should reflect the themes in the guide and provide visual interest to readers,” WCSS says in a post.

To submit, send a resume, bio, and other documents to demonstrate your skills, along with an idea for the cover, to grace@mywcss.org by May 25.