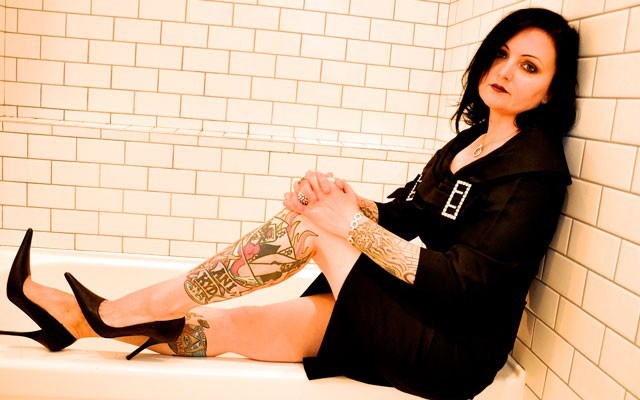 All that jazz Ani Kyd performs music from her upcoming album at the Howe Sound Brew Pub. Photo submitted

Ani Kyd has had a fun time in the West Coast punk scene.

Whether singing backing vocals on "The Audacity of Hope" for Jello Biafra and the Guantanamo School of Medicine, or performing with D.O.A., Bif Naked or Our Lady Peace, Kyd has had a versatile career that has moved from music, to film, to reality TV.

Now she has gone solo and is loving every minute, with her third album due to drop in early 2016.

The Vancouver singer-songwriter is currently trying out new material on a tour around British Columbia, and performs at the Howe Sound Brew Pub in Squamish on Friday, Sept. 18.

"The solo set is going over great. I love it. It's a fun thing to do," she says over the phone from Prince George.

"The idea of this tour is to play smaller intimate venues.

"This tour is the beginning of something bigger. I'm applying for festivals next year and will try and do the festival circuit."

Kyd says she has wanted to try things on her own after playing in bands for many years.

"I really love when you pare it down to vocals and a guitar. A good song is a good song," she laughs.

This has meant moving away from punk and moving towards blues and jazz.

"I just write music that comes from my heart and soul. After the fact I'll look at it and go, 'That's kind of bluesy, that's kind of jazzy!' It's not like I'm doing it deliberately," Kyd says.

"I said to someone the other day that I'm just not an angry teenager anymore. We grow up."

Her musical influences have always been varied, running from classical, to "really old blues like Robert Johnson," and Billy Holiday.

Kyd says: "That's where I come from. I can hear someone play a guitar and they are not technically perfect, their voice isn't, but you feel the emotion and the song and what it is trying to put across. I'm going more for the feeling of the music."

The direction comes after a career of 30 years in music.

Like many women, she says, her music career became secondary owing to family commitments."Now I'm able to let go of the apron strings, the mom stuff," she laughs.

As a writer, producer, actor and director, Kyd has been prolific.

She directed the pilot for The Vegan Roadshow, is in the middle of developing a Vancouver-based reality series/docu-soap on former-gangster-turned-businessman Rocco Di Poppolo, and has several web series in the works.

As an actor, she has appeared in numerous videos by bands like The New Pornographers and Thor.

Kyd's new album is as yet unnamed and due out in February.

"This tour is a case of trying out the material. So far all the shows I've done, I've been by myself and the first set is about older songs, bits and pieces of my life. It's been interesting. I really love interacting with the audience, and when you a front person it's what you do. It's almost like wearing a costume, in a way," she says.

"But when you just have a guitar and a mic, you're scaling it down. You can be more interactive and talk to people. It's a nice feeling. That's what I'm going for with this."