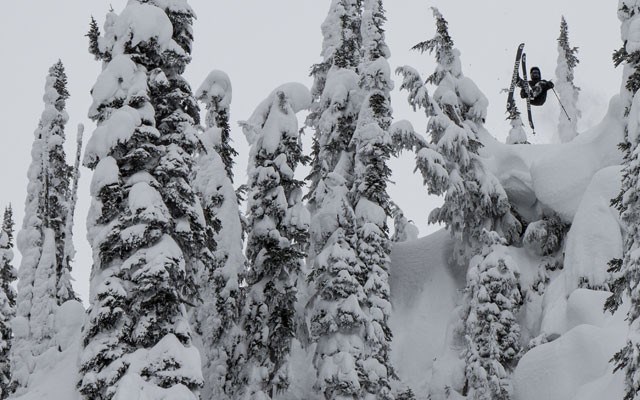 Snow fun The Big Picture from the U.S. is one of the crews taking part in Intersection. Photo submitted

Asked where he and the other owners of freeski adventure film company The Big Picture are based, Sean Logan responds with, "For this month?"

The three Americans — Logan created The Big Picture with his skier brother Chris and pal Parker White — are on the road from December until May.

They live in different states when they are not travelling the world trying to capture the best footage of magnificent backcountry experiences; Logan lives in Mammoth Lakes, Calif., Chris lives in Summit County, Colo., and White in Boseman, Mont.

But since they've kept it simple and small scale, this hasn't been a problem.

"There isn't a huge backend to it," Logan says. "It seems pretty easy right now."

The Big Picture is competing in Intersection at the World Ski and Snowboard Festival (WSSF) on Friday, April 15.

Chosen adventure filmmaking crews put together a five- to seven-minute ski and/or snowboarding film that must be shot within 100 kilometres and show them in front of 1,500 at the Whistler Conference Centre. Doors open at 8 p.m.

This is The Big Picture's first time competing in Intersection and they arrived in the Sea to Sky region in March.

"It has been a good experience. We were planning to film for our project in this area anyway; it was a good opportunity to come out. We had help from local skiers who know some zones and that made it a little bit easier for us," Logan says.

"It was good to have a little bit of pressure. Some of the footage is for our stuff and for the (Intersection) video. We wanted to get as much stuff as we could."

The team for Intersection included other athletes such as B.C.'s Jordan Clark and a cameo by American Tanner Rainville.

"It's a challenge for all of us, too," says Logan. "We normally shoot and edit something in a month and we've been shooting two-and-a-half-months and putting out an edit. It's good to challenge ourselves and see what we can do in a week."

He says The Big Picture's dynamic remains constant throughout the season and their small size as a team makes them efficient.

"We go out into the backcountry, get what we need and maximize our days. Going into the shoot for Intersection we just needed to work a little harder than we normally do. Luckily the snow and conditions were good every day," Logan says.

The guys are big fans of British Columbia when it comes to their filming; Logan says it had the best terrain and most consistent snow.

"We spent the majority of our winter up here this year. We went to the Interior and the Revelstoke area in the first week of January, and the Monashees most of January and February. We skied Nelson as well. We made our way over here at the beginning of March for Intersection," he says.

Logan, White and Chris Logan grew up skiing together and had been shooting larger ski movies. They decided to approach mutual sponsors about turning their work into a webseries and never looked back.

"This is our third winter putting out our webseries. Rather than shooting a whole winter and waiting until the (following) fall to put out a movie, our idea was to shoot and edit good-quality action and put it out throughout the season to show everyone what's happening right now," Logan says.

"It's more accessible and completely free online; they gave us a chance and we're still doing it."

He particularly likes attracting general viewers who are interested in their films though not usually adventure sports enthusiasts.

"We try to keep to our roots, we're definitely backcountry freestyle oriented, but mixing in some good lifestyle stuff and editing it to music that anyone would want to listen to anyway," Logan says.

"The vibe we try for is to appeal to anyone, no matter what the content is. I will watch mountain bike videos and if they're really good and grab you then it doesn't matter if you don't know what tricks they're doing.

"A ski audience can pick apart the difficulty and the tricks in our movies. There are two ways to watch it."