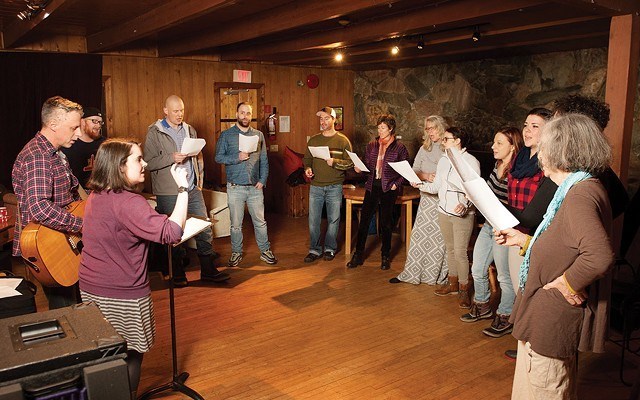 Jeanette Bruce only has one rule for Barbed Choir's Holiday Singapalooza.

"I do not allow spectators," she says. "You can't come in and not sing. That's the social contract you're signing when you come ... Everyone else is vulnerable and putting themselves out there, so you have to as well."

She adds with a laugh, "I think I do a good job communicating that in a non-abusive way."

That rule might sound strict, but it gets to the core of what choirs like Barbed Choir or Toronto's Choir! Choir! Choir! are all about—coming together for the joy of singing for one night.

The holidays, though, seem to be the one time of year people are comfortable singing their favourite Christmas tunes.

Last year was the first year Barbed Choir—which gathers regularly at the Whistler Public Library—hosted the holiday event at the Maury Young Arts Centre after being invited by Arts Whistler.

"It was so fun and it went really well," Bruce says. "We had 75 or 80 people, which was a great turnout, more than we've ever gotten for a single Barbed Choir event. And [there were] lots of people who had never been to a Barbed Choir before. Lots of visitors and quite a mix of people."

Now, they're set to do it all over again on Dec. 12 as part of the Arts Whistler Live! series. (The event is all-ages, but the bar will also be open.) "It's amazing how much noise you can make with that many people," Bruce says. "Any fear anybody would have about, 'I don't want anyone to hear me sing,' you probably won't! It's amazing how much your voice will blend in with that size of crowd."

Like last year, the first half of the event will be a warm-up of sorts, with the crowd singing Christmas favourites like "Winter Wonderland," "Jingle Bell Rock," and "Feliz Navidad."

Bruce and co-choir director Laura Nedelak chose the selections together, aiming for non-secular songs that have harmonies already built in. (Bruce adds that those interested in singing more traditional Christmas carols should make note of the long-running community Christmas Eve Carol Service.)

Then, the second half of the night, the group will tackle the Wham! song "Last Christmas."

"It's going to be a lot different because [last year's song] 'Baby, Please Come Home' was recorded in the ['60s]. It's got that old-school R&B feel, whereas 'Last Christmas' is so '80s. It will be a different vibe, upping the cheese factor. I really like to lean into that," Bruce says.

While last year's solid turnout doesn't guarantee singers will show up, the holidays seem to go hand-in-hand with singing.

"It's probably a very deep nostalgia thing for a lot of people," Bruce says. "There are lots of adults who probably haven't sung in public since an elementary school Christmas concert. Or they don't go to church, but they go on Christmas Eve with their families. There are lots of examples of people singing during the holidays who don't sing the other 11 months of the year."

Singapalooza takes place on Thursday, Dec. 12 at 6:30 p.m. at the Maury Young Arts Centre. Entry is by donation to the food bank.

"Non-perishable food items are great, but cash donations go further for the food bank," Bruce says. "A $5 bill is more valuable to them than a can of soup. I would encourage people to bring cash donations."

And if you can't make the Christmas singalong, Barbed Choir's next session is Sunday, Jan. 26 at 7 p.m. at the Whistler Public Library.