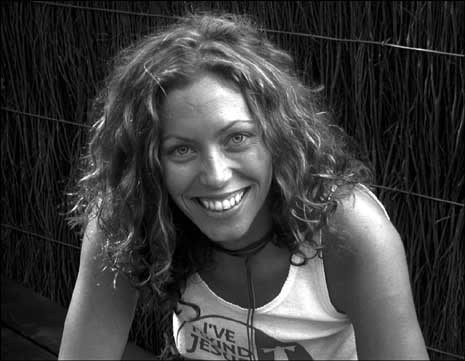 To have one dusty little child smiling back at you with that joy of music in<BR< their eyes, their smile, it was such a rewarding experience. - Cass Eager

Blue Rodeo’s master of lap steel, pedal and slide guitar Bob Egan is a well known force around Canada’s music scene; however, fellow musician Cass Eager, who will join Egan for an intimate concert Tuesday, July 25 at MY Millennium Place, is a fresher face to Canuck soil. But not for long.

The Aussie singer/songwriter released her album Beautiful Day in Canada prior to its release this month in her native land. The Canadian release of her album supported her two-month-plus Canada-wide tour that comes to a close on B.C.’s west coast this month.

While a debut album, the Sydney songstress is a seasoned vet with years of stage experience behind her; most notably her time spent entertaining Australian troops and United Nations workers in East Timor.

"We stayed on the army bases," Eager said of her Indonesian adventure. "We had our own dog tags, fatigues. Basically we got to be in the army without having to join."

Aside from sharing a chuckle over messing up the suspension on a tank after taking it air borne, Eager’s best memories were the in-town and orphanage concerts she hosted where she got to know local residents who now refer to her as "mana" or sister.

"I’d play in these markets and to have one dusty little child smiling back at you with that joy of music in their eyes, their smile, it was such a rewarding experience," she recalled. "Fifty per cent of the (Timor) population is under 15 years old. You feel a bit like the Pied Piper having all these kids following you through the market. It’s not like here where parents never let their kids out of sight. Many of the children don’t have parents and just roam the streets alone."

Other musicians, such as Peter Garrett of Midnight Oil and Paul Kelly, were equally touched by the hardships East Timor faces. After Kelly, Eager and others performed at Timor’s Independence Day Anniversary Concert in 2004, which drew crowds of 40,000-plus, Kelly decided to produce a fundraising album called Timor-Leste Freedom Rising. The compilation released on EMI/Capital, included Eager’s single Beautiful Day along with tracks from John Butler, Missy Higgins, Kelly, The Cruel Sea, Kasey Chambers and The Cat Empire.

"It’s the only way I know how to help is through music," Eager said. "It is such a beautiful way to communicate. You don’t need to speak the language (of a different country). Music is the language."

Eager has spoken the language since she could walk, leading to her first fronting a band called Mofo then a solo career. Eagen has performed with the likes of The Beautiful Girls, Alex Lloyd, Lior, Diesel and Carla Werner, just to name a few. She also appeared on four other album compilations, leading to her being named Emerging Australian Artist on SBA Music’s International Compilation.

Her music is fit for kings, or at least a prince. Prince Harry was so won over by Eager’s music after hearing her perform live at Kerry Packer’s polo property Ellerston, he asked Eager to perform the following week. Eager even gave the British prince a guitar lesson.

Eager’s music travels the gamut from soul to blues, folk to gospel and roots to reggae – all threaded together by soul.

"Her voice is as rich as chocolate and with more soul than heaven on a busy day," wrote one Brag critic. "She drew the crowd with her smile and has a groove like Jack Johnson and a voice reminiscent of Janis Joplin."

"I listen to anything that has soul; anything that comes from the gut and makes you feel it in the gut," Eager said. "Something so personal inside of you that touches another person, whether a ballad, blues or rock, the way I sing is soulful."