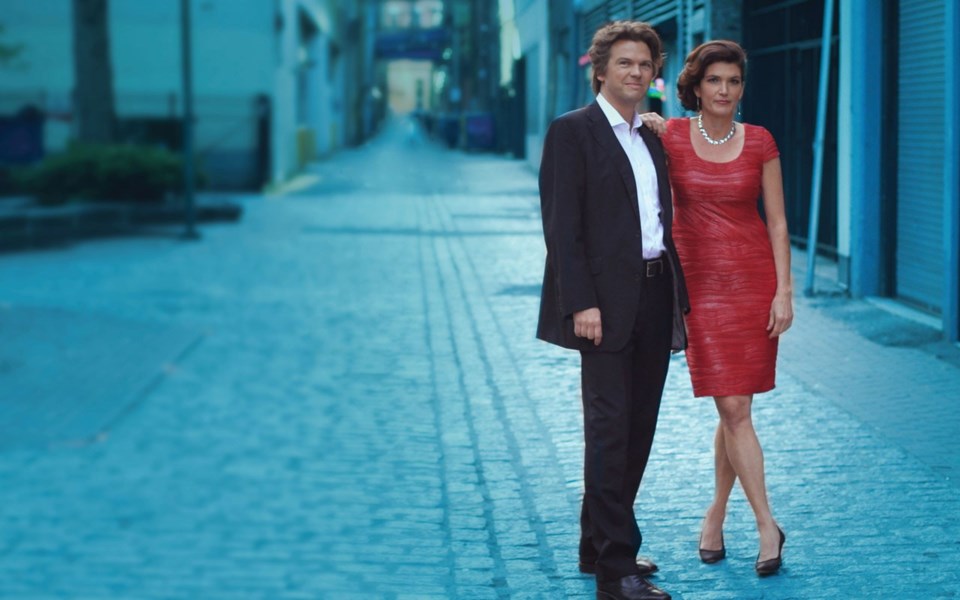 Marcel and Elizabeth Bergmann are performing in Whistler at the Maury Young Arts Centre on Feb. 29. Photo submitted

Marcel and Elizabeth Bergmann have been performing as a piano duo since they first met in music school in Germany.

Their sold-out Whistler show at the Maury Young Arts Centre as part of the Arts Whistler Live! series on Feb. 29 will showcase Marcel's pop and rock arrangements, as well as their talent in classical music.

One highlight: they're partnering with the Sea to Sky String Orchestra for the beloved and epic "Bohemian Rhapsody."

Pique caught up with the Bergmann Piano Duo to talk about working with a spouse, establishing themselves in B.C., and balancing chamber music with playing the hits.

Pique: You two met in music school in Germany?

Elizabeth: How it all started was I came over to Germany to study. We were in the same class, studying with the same teacher. We would have a repertoire class where we would play for one another—like a master class situation. Often times, we would accompany each other in orchestral productions and the other person would play a second piano. Our very first experience [performing together] was playing with an orchestra in Greece. We were together as a couple by then and our teacher said, 'Hey, why don't you team up?'

Pique: Did you work well together right away?

Marcel: We noticed pretty quickly we were quite compatible in terms of playing together and musical interests.

Elizabeth: Back then, we were students and younger. We worked a lot of relationship things out. Then you also have to be able to work together. Over the years, we really found a way. The first few years were difficult and a lot of work, but then we found our motives of communicating that allowed [us] to still be professional and not make it personal.

Pique: I don't know if this is too personal, but in those years, did you prioritize either the relationship or the music?

Marcel: It got quite intertwined. It's very hard to separate those two things. That's one of the challenges. When you're that close, you don't have a filter.

Elizabeth: You say it how it is. [Laughs.] Of course, now it's so easy. People says, 'It must be so wonderful.' And it is to be able to travel together. A solo pianist's life can be very lonely. They play a concert and if they don't know anybody in that town, they're by themselves or with strangers ... This way, we're always together and can tackle the challenges together.

Pique: Is playing music together second nature at this stage?

Elizabeth: Pretty much. We don't have to talk about a lot of stuff. It just happens.

Marcel: We used to argue over the right tempo. Now, we always find our tempo very organically.

Elizabeth: Musically, too. Spontaneous things happen and we can respond to each other because of that intuition and because we've been playing together for so many years. We can respond to one another in a spontaneous way.

Pique: I can imagine it being tough at first.

Elizabeth: If you can get through it, you've made it. The challenge now for us is to create space and time apart when we're not performing. We also have couple time, but individual time, too. Every couple faces those challenges.

Pique: You moved to Calgary and then White Rock. What has been like since moving to B.C.?

Marcel: We're very lucky. It's been great. We had a lot of other opportunities out here—some of them came very unexpectedly.

Elizabeth: We have a coffee concert series we do all around the Lower Mainland and a couple of place on the island. We basically play the same program in each place. That happens four times a year, so 20 morning concerts. Basically, they start at 10:30 a.m. and there is coffee and treats. It varies from venue to venue. People come early, grab coffee or tea, and we play a concert for 75 minutes—60 minutes of music and 15 minutes of talking. It's an informal setting to talk about music. It's really grown over the last two years ... We always have a guest that joins us. It could be a violinist, singer, guitarist or cellist.

Pique: What will the show be like when you come to Whistler? You'll also have guests for that one with the Sea to Sky String Orchestra playing on "Bohemian Rhapsody."

Marcel: We're doing a little bit of a cross section of repertoire. When we talked to Imogen [Osborne, programs and events manager at Arts Whistler] she said it would be nice if there's a little bit of classical content in it—Rachamaninoff, Gershwin. The idea is the whole thing could attract a younger audience ... 'Bohemian Rhapsody,' I did the original arrangement for string quartet and piano four hands, at one of the coffee concerts. We had a lot of extra people come to that concert because of 'Bohemian Rhapsody.'

Pique: What do you think it is about that song that people love?

Marcel: It's one of these classic songs that everybody loves. It's very unusual. When it came out, it really made a splash because, of course, Queen are influenced by The Beatles and so on, but there was something about that song, that collage, all these different sections, full of surprises. It has this episodic structure that's longer than the average song and much more complex. It's something people love across generations ... and Pink Floyd is a little bit the same. A lot of my students had Dark Side of the Moon t-shirts.

Pique: Anything else you want Whistler to know?

Elizabeth: We're super excited to play in Whistler and really pumped that it's going to be really full. We're excited to share our music with everybody.

Tickets to the Bergmann Piano Duo are sold out, but you can always check in at the door on the day of the event. It starts at 7 p.m. on Feb. 29.