Between Shifts Theatre strips down for Calendar Girls 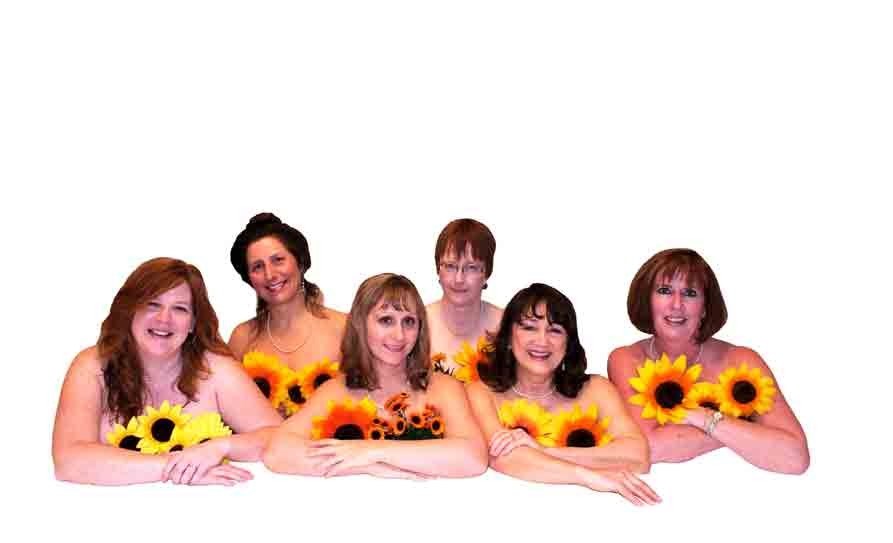 If you walk away from Between Shifts Theatre's production of Calendar Girls thinking the cast was naked, well then they've done their job.

"It's community theatre," says Kathy Daniels, the theatre's artistic director and one of the lead characters in the play. "I'm not sure if Squamish is quite ready for full frontal nudity from a bunch of older women."

So how exactly do they navigate a plot that's based on posing naked in a calendar? "Let's put it this way," she says, "When you come away from the show we hope you think (we were naked)."

The play is based on a movie of the same name about a real group of Yorkshire women who raised money for a new hospital couch with a racy calendar after one of the women's husbands died from Leukemia. Daniels plays a character called Chris Harper, a close friend to the widowed Annie Clarke, who spearheads the fundraising project. "She's an interesting character because Chris is someone who gets super enthusiastic about something for the first time in a long time. She's a character who never follows through on anything," Daniels says. "She turns this calendar into an amazing success. But at the same time, she loses her way a bit in the success. Once (the women travel) to L.A. there's an opportunity for them to do a commercial and the commercial — unbeknownst to them — involves taking their clothes off again for a soap product. The whole thing starts to go off the rails and Chris doesn't realize it until her friend Annie tells her."

To that end, the story touches on themes from friendship to good intentions gone wrong. "(It's about) how valuable friendship is and how your best friends can help you see the flaws in your own character," Daniels adds. "A sense of community, how people can be a really positive force and make a change for good. How some people like Chris can lose their way when doing an (altruistic) project and focus more on their own success. Ego can get in the way."

The large group of actors — including the six calendar girls, four supporting actresses and four men — have been holed up for three days a week in the Sea to Sky Hotel (which offered up its ballroom for rehearsal space in exchange for a bit of advertising) since January rehearsing.

Though they're now in final run-throughs ahead of the show's opening March 28, Daniels says one of her fond memories over the last few months was the first nude scene in rehearsals. "There we are in this ballroom and we got the doors papered up at least. It's sort of weird to be whipping it off down to your underwear. It took a little bit of courage, but once we'd been together awhile, you trust the people that you're around. That was a good moment," she says.

Another welcome challenge: working with first-time actors. "They're having to learn the craft as well as the role," she says. "There are people who didn't know what stage left or right was, but that's what community theatre — and Between Shifts — is about: people who are interested in learning the craft."

While there's only one little "f-bomb" in the dialogue, Daniels says the show is best suited for kids over 12. More broadly, it will appeal to anyone who's been touched by cancer, she says. "The subject is targeted at middle age to older people for sure, but also some of the characters are in their 20s. That's the cool thing about the play, the characters span in age from late 20s up to 70s and 80s. There are all different ages. It's got very broad appeal in that way."

While director Linda Gardner-Bicheno's enthusiastic pitch for the play was a major reason they decided to perform it, the company is celebrating its 20th year and also wanted to choose productions that would appeal to Sea to Sky supporters.

"It's all volunteer. People in our club are doctors, nurses, lawyers, managers. They have other lives and families," Daniels says. "This is the other thing they're doing and it takes a lot of hours. We thought Squamish would really, really enjoy it."

A portion of the ticket sales for the show will also go towards paying royalties for the play, which are donated to fighting Leukemia.

Up next: Between Shifts will be putting on a series of one-act Canadian plays — including some by Whistler playwrights — at the Brackendale Art Gallery in June. Their final production of the year will be A Christmas Carol at the end of November into the beginning of December. "The season is all planned," Daniels says. "We're hoping people will get out and see them."