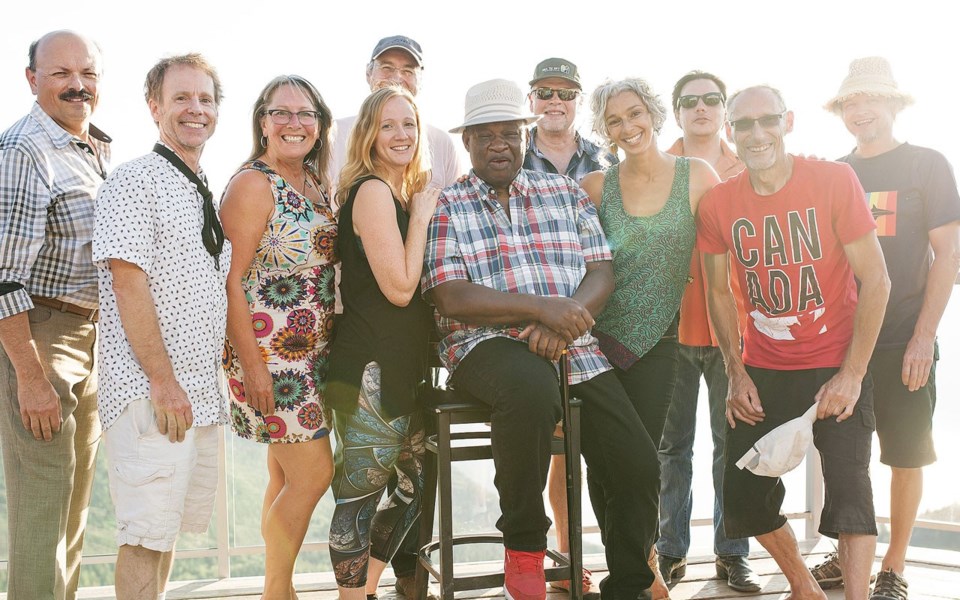 Music fans can wander into any village venue that hosts live music and discover a solid cover band pretty much any night of the week.

But stumbling upon one that has 11 members, a horn section and three back-up singers? Well, that’s a little less common.

In fact, Bluesberry Jam Showband just might be the sole Sea to Sky band that fits that description.

“Generally the dancefloor is packed,” says vocalist Samantha Sinanan. “We’re so lucky that people get up and dance.”

The group first formed in Squamish back in the ‘90s as Bluesberry Jam, a straight-ahead blues band with the usual guitar, bass, drums and vocals setup. “Over the last two years it’s expanded to become the Bluesberry Jam Showband,” Sinanan says. “We’ve expanded to cover that core roots and blues to R&B, soul and funk. We are so lucky that we’re all really good friends. We have a great sense of camaraderie. It’s like a band family.”

Sinanan, the newest member of the group, joined in 2016 after playing a solo gig at a local event and meeting the band’s bass player, who also works as a sound tech around town. “We got to chatting and he said, ‘We’re looking for another back-up singer,’” she recalls. “It is a lot of a fun.”

The group has a repertoire that includes “lots of the classics, lots of R&B,” ranging from Ray Charles to Aretha Franklin, but they’ve recently added in more contemporary covers by artists like Amy Winehouse and Elle King too.

“We’re trying to strike a bit of a balance,” Sinanan says. “We generally do covers when we perform, but we have a couple of original pieces, some works in progress as well.”

While they’ve played several venues around Squamish—from the Sea to Sky Gondola to the Brackendale Art Gallery—Bluesberry Jam Showband has only performed in Whistler a handful of times.

The most recent gig was part of the Hear and Now local music festival last fall. On Feb. 14, though, they’re headlining Arts Whistler Live! Best Date Night Ever at the Maury Young Arts Centre.

“We’re really excited about that show,” Sinanan says. ‘We’re hoping people come out and bring their dancing shoes. Bring a date, bring a friend, bring yourself.”

And don’t worry—the performance won’t be packed with sappy love songs. It will, however, include Prosecco and chocolate-covered strawberries. “We considered the Valentine’s Day theme when we were putting together our set list. There’s one song we do called, ‘You Don’t Love Me’ and we were like, ‘Maybe that’s not a good one to include!’ A lot of the older tunes have that love-y theme, but we don’t want to be too mushy. We want it to be fun.”