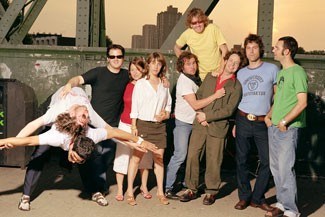 Despite a shamelessly endearing dorkiness they’ve been heralded as the harbingers of a new Canadian cool – a nebulous collection of musicians at times numbering upwards of nine or 10 on stage. Toronto’s Broken Social Scene breaks the mould when it comes to bands, sound, image, you name it, their honesty and lush arrangements winning them dedicated fans the world over.

Don’t get your hopes up. The band is not scheduled to make an appearance in Whistler anytime soon. However, local BSS fans can taste the magic at the Whistler Film Festival this weekend. The band produced the film score for Canadian director Bruce MacDonald’s latest film The Love Crimes of Gillian Guess , which screens Friday, Dec. 3 at 9:30 p.m. at Village 8 Cinemas.

For those who weren’t around these parts in the late 1990s, Guess is the notorious bombshell juror convicted of obstructing justice after it was revealed she had carried on an affair with Peter Gill, one of the suspects on trial for first degree murder. Guess and the rest of the jury acquitted. The affair was uncovered and Guess was taken down, fighting to the end that she had fallen in love, nothing more.

For those cringing at the TV Movie of the Week insinuations of the title and subject matter, rest assured, neither MacDonald nor Broken Social Scene would do such a thing.

The surreal, rock ’n’ roll film digs into the psychology of Guess’s outrageous act, exploring a sad past and humouring her delusions. The film centres around a Jerry Springer-on-acid TV talk show on which guest Guess, played superbly by Joely Collins, tells her trashy story. MacDonald film mainstay and Headstones frontman Hugh Dillon is on board as slimy host Bobby Tomahawk, whom he plays to the sharkskinned hilt.

To find out more, Pique Newsmagazine caught up with Broken Social Scene producer David Newfeld, who joined the band as a writer and player for the film score and co-engineered the project with Ohad Benchetrit of the band Do Make Say Think.

PIQUE: Was this the band's first experience working with Bruce MacDonald? Has BSS done film scores for other directors?

Kevin Drew of Broken Social Scene had pitched Bruce for an earlier film a few years back but didn't get it, so this time Bruce made sure it happened. I think as a band, this is for sure our first proper film score.

PIQUE: How did this collaboration work? The film is a mishmash of genres and techniques and in my opinion would be very difficult to convey until it was actually on its way to being completed.

: The film was already cut when we first received it. Bruce had various ideas about where music was needed and issues with licensing songs from other bands. The swing tune was put together because they couldn't get We Are in Love by Harry Connick Jr.

PIQUE: In the latter half of the film the music is an essential element in the transition from the circus atmosphere of the talk show to the muted, and very genuinely emotional flashback scenes. It's impossible to think of the scene where young Gillian says good-bye to her father without hearing the song playing throughout that scene. Can you tell me a bit more about that particular piece of music?

: I believe that's Lover's Spit. That's a gentle version of it with Leslie Feist singing it, originally sung by Kevin Drew who wrote the tune. That's a very tender version and Bruce already slated that one for that scene, if I recall.

PIQUE: What was it like to work with a film that required this kind of range?

: We're pretty far out people so the more range the more fun.

PIQUE: I heard Hugh Dillon's voice in there.

: There's a Headstones song in the film. It's standard that Hugh'd have at least one tune on a Bruce MacDonald film that he plays the lead role in.

PIQUE :The scene where Gillian performs as the musical guest, are members of BSS on stage with her?

: No, those guys in the film are way better looking.

PIQUE: On the whole, what was the experience of scoring this film like?

: It's a great experience working for Bruce. He's a wonderful guy, so we were mainly concerned with coming up with something that we thought he'd like.

PIQUE: Are there any other film-related projects on the horizon?

: Hopefully, but we're presently working on the next Broken Social Scene record.

: Bruce MacDonald rocks and I hope he makes his next film about a virus that causes people to slowly lose their vocabulary, but it only affects people who speak English. What amazing parameters to base a film upon.