Cabaret night at The Point 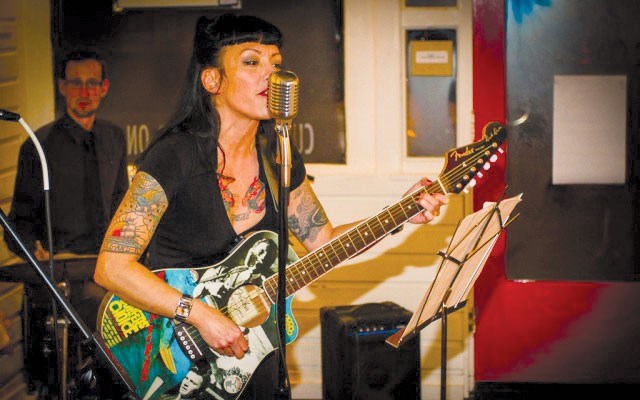 Open invitation Writer and musician Yasuko Thanh is performing at the cabaret night at The Point during the Writers Adventure Camp. PHOTO submitted

For an evening of literature and music, The Point Artist-Run Centre is opening up its Writers Adventure Camp weekend for a night of cabaret that is open to the public.

Thanh won the 2016 Rogers' Writers' Trust Fiction Prize for Mysterious Fragrance of the Yellow Mountains and plays in a punk band.

All three are among the instructors leading workshops on screenwriting, YA fiction, memoir, digital storytelling and more taking place at the Writers Adventure Camp at The Point Artist-Run Centre from June 1 to 4.

For more information on the cabaret and to buy tickets, visit www.thepointartists.com.

Thanh is also an instructor at the adventure camp teaching fiction over the four days. Turner is teaching an afternoon workshop on Exploring Digital Narratives on Friday, June 2.

Officials at the New Orleans-based company confirmed to Billboard that they brought in "layoffs to scale down appropriately."

Huka CEO Evan Harrison said the company still ran a "concert-tour team as well as a scaled-down fest team," but would not state the number of employees remaining.

Harrison referred to Huka as a "vendor of Pemberton who was caught off-guard by this," with losses as an unsecured creditor totalling $99,762.96, according to a Statement of Affairs document listing secured and unsecured creditors, issued by the Office of the Superintendent of Bankruptcy Canada (OSBC).

The first meeting of creditors is due to take place at 10 a.m. on June 6 in Vancouver.

The Squamish Arts Council is teaming up with the Squamish Connector to bring fans to Whistler on opening day of the Chili Thom Experience, five exhibitions to celebrate the life and work of artist Chili Thom, on Friday, June 2.

The bus will bring people to the opening reception of the show, which starts with His Masterpieces at the Audain Art Museum on Friday, June 2, at 5:30 p.m. and continues with His Eclectic Soul at the Maury Young Arts Centre at 7 p.m.

Tickets are $18 and proceeds are going towards three high-school art scholarships in the Sea to Sky school district.