The world-renowned blues man will show you what the instrument is really all about
Mar 4, 2011 7:32 AM By: Stephen Smysnuik 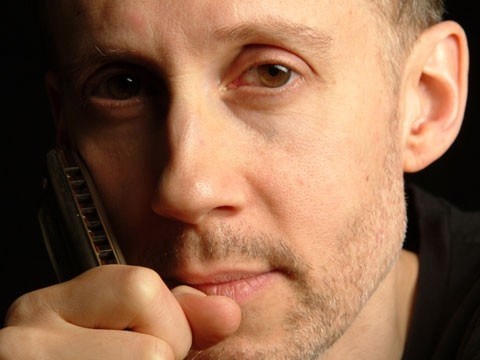 There's a moment in Bob Dylan's "Pledging My Time" when the harmonica hits a note so high and so sour it's enough to make even dedicated fans cringe.

And it's for this reason the harmonica has a bad rap. Thinking about it conjures images of Dylan with a neck brace or the jiggly fellow from Blues Traveler labouring over his instrument.

But then there's Carlos del Junco, the world-renowned blues harmonica player who really plays the thing - this ain't the two note meddling classic rock fans know of Dylan or Neil Young. This is versatile playing that transcends what pop music fans will expect from the instrument.

"It goes without saying that they (Dylan and Young) are brilliant songwriters," del Junco says. "Of their generation there aren't many that come close, but when it comes to the harmonica, in my opinion, they're terrible harmonica players."

But this guy...well, this guy ! He makes the harmonica sound like anything but - more a saxophone perhaps, or a trumpet, or an electric guitar even. He's a virtuoso, shredding that little tin object like Yngwie Malmsteen on the six string.

Del Junco says what makes a good harmonica player is what makes any musician good. He just happens to play a generally unpopular instrument. He says he'll often hear of people who have never heard his music saying, "Do I really want to spend three hours listening to this?" And when the set is finished, he's practically converted the unfaithful. He's had an eclectic taste in music - the first vinyl he ever purchased was In the Court of the Crimson King by King Crimson at 14 years old, a challenging record for any music fan.

But it was upon hearing Paul Butterfield that he found his calling: that bleeding harmonica. Since then, he's been travelling the world, picking away at people's preconceptions of what the harmonica should sound like, or what it shouldn't sound like, in the same vein as his mentor, Howard Levy. In 1993, del Junco won two gold medals at the World Harmonica Championship held every four years in Trossingen, Germany -  the Super Bowl of harmonica championships - and recorded his first album that same year.

When he spoke to Pique, he was four days away from embarking on a four-week tour of B.C. and Alberta, a trek that will have his band playing mostly theatres, skipping out on the bars he played in his youth and dispelling visions of the dirty blues band playing behind a chain link fence at a bar like something out of Roadhouse .

"This is much nicer," he says with a laugh. "It's kind of a no-brainer. You have a 100 per cent attentive audience. You're in a theatre so it's a completely different atmosphere than in a bar, and people are sitting there to be entertained and you always sell way more CDs."

He'll be performing songs of his new album with the Blues Mongrels, Mongrel Mash, which plays like the soundtrack to a gang of mutts roaming New Orleans back alleys. Opener "The Crazy Bastard" recalls the Rolling Stones at their raunchiest, bluesiest best while del Junco's solo album highlight "Mojo" is about as trippy as a harmonica can probably get. The album blends quirky melodies with some truly off-kilter jazz and blues, tied together with del Junco's progressive sensibilities. And his harmonica is as emotive as any vocalist can be.

"If we don't make your spine tingle we're not doing something right," he says.