Celebrating the 2010 Games' circle of humanity 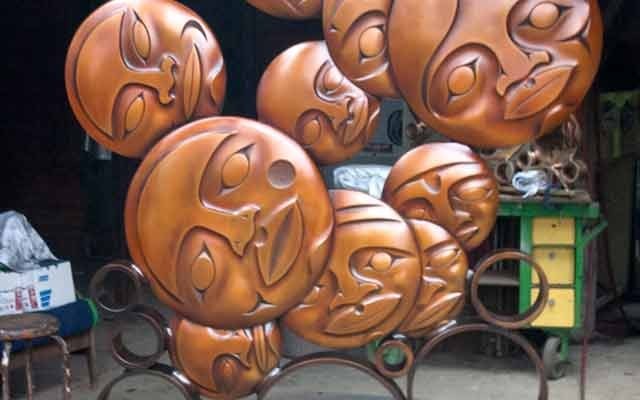 Olympic legacy Two of five sections of Timeless Circle by Susan Point, which will be unveiled in Whistler in early March. Photo submitted

When Susan Point's enormous bronze sculpture Timeless Circle is unveiled in early March, the final legacy of the 2010 Winter Olympics will have come home to Whistler.

The bronze work, which depicts 86 faces in five two-sided sections, will be mounted on plinths in front of the Maury Young Arts Centre, across Blackcomb Way from the Audain Art Museum and adjacent to Whistler Olympic Plaza.

"My plan was to just do the faces on one side but I got carried away," Point laughs.

"Two sides made more sense because it was going to be seen from both directions. I wanted it to be a snowflake shape but then it changed over time.

"It will be installed in such a way so that it is touchable. People can have physical contact."

The 63-year-old Order of Canada recipient is a Musqueam First Nation artist who works in the Coast Salish tradition in her Vancouver studio. She is one of the few indigenous women working on monumental-scale public art projects, but is also know for her smaller pieces, including paintings and prints.

"Private clients buy my work but only they and their friends can see it. With public art everyone gets to enjoy it and that is what I like about it," she says.

Point was selected for the project in 2010. The cost to the Resort Municipality of Whistler (RMOW) for Timeless Circle is $198,000. It is Point's largest bronze in a public art career that began with designing an ornate tree grate for the City of Seattle in 1986.

"Because I decided to go two-sided it took a lot longer. Many people have worked on this, including my boys. My daughters were sanding it. The sanding took a long time because I wanted it smooth. I'm a perfectionist, basically," she says.

Point says bronze appeals to her as a medium, interestingly because its form will be the first thing taken in by those seeing it.

"With wood the viewer can get lost in the story within the grain... the story of the tree. However, the beauty inherent in wood is still a great medium to work in... I love it!" she says. "Both mediums invoke different emotions."

During the 2010 Games, Point provided public carving demonstrations in a tent erected in front of the Vancouver Art Gallery (VAG). The tent averaged about 2,000 visitors a day. Her four children took part, too.

"The (VAG) created a studio pavilion for me... a beautiful log construction," Point recalls. "The lineup was hundreds of metres. I could not stay away. I talked with so many people from various cultures. This connection gave me adrenaline."

These people became the inspirations for Timeless Circle, a look at faces of the world with a distinct Coast Salish interpretation that has an aspiration for universal themes.

"It's very subtle. Although it's done in my Coast Salish style of art, I like to keep it wide open. Not too traditional so that people would say that it's a native piece. A lot of my work tries to incorporate all cultures," she says."If you look at the faces, you'll see the differences in them. Each one unique, celebrating the diversity of cultural and ethnic backgrounds of the hundreds of athletes, visitors, volunteers, and hosts who travelled from around the world to be a part of the whole 2010 Winter Games. As well, it honours the young and old and the peoples of the past, present and future."

Timeless Circle was made using a combination of the lost wax-casting technique and bronze-plate fabrication.

Rather than creating the sculpture's faces in clay first, the typical way of preparing for bronze casting, each two-sided face was carved in red or yellow cedar. This allowed Point the opportunity to carve in her favourite medium, keeping that connection with indigenous art forms.

"I originally started out carving in wood and I do love working in wood. I like the smell; using it is meditative. And going beyond the traditional, I decided to try different techniques and bronze was one of them," Point says.

Timeless Circle will be a major stop on Whistler's Cultural Connector walk, which will be built throughout 2016 and connect many artistic and education spots in the resort.

A final date for the official unveiling of Timeless Circle has not yet been selected, said the RMOW in an email. Pique will publish the date when it becomes available.