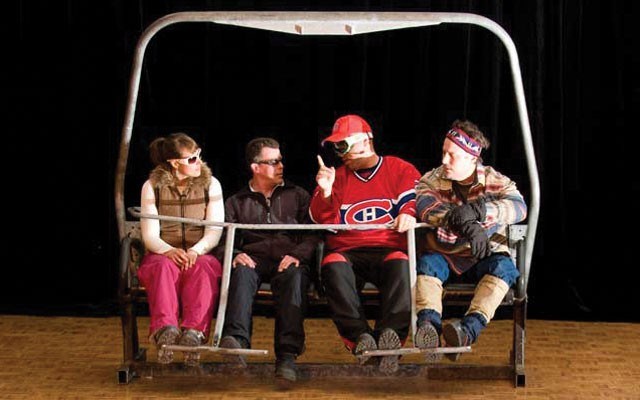 Getting a lift The Chairlift Revue is taking place this Christmasm on Dec. 18 and 19. File Photo by Mike Crane

Kate Linton and Kirby Brown are angelic and theatrical.

It's all for the Chairlift Revue, Whistler's annual comedy skit night, which is being put on in the Christmas season for the first time in years.

The Chairlift Revue is as Whistler as falling snow after a night on the tiles, anticipating a bluebird day with two feet of pow as the flakes fall silently from the dark sky.

The revue is the opportunity for local writers and actors to present skits that all take place on a chairlift — and has become a winter-spring staple since the mid-'90s.

Co-producer Heather Paul is putting Linton and Brown through a rehearsal of her play Angels On Guard; she takes on the wacky role herself, she's a senile Christmassy Angel Gabriel.

The story is Santa is cancelling Christmas after a series of disasters and the angels are watching on with dismay and hoping to fix it. They sit on a Whistler Mountain chairlift to discuss the problem

"It's brilliant, I love it," Linton says of her first time with the revue.

Brown gives a nod to the importance of the revue to the Whistler community.

"You can never live in this town again if Heather and Angela (Nolan, Paul's other half in co-producing) ask you to do it and you don't. The pressure's immense!" he laughs.

When it comes to the skits, the happenings are funny, they're outrageous and they are something you hope someone you care for never experiences on Seventh Heaven.

That said, you never know who you will meet, whether they be angels or demons or Australian lifties.

"It's going to be a bit fantastical, nutty and fun. Just as nutty and fun as the cast of characters taking part," Nolan says.

There are nine skits planned for the revue, which takes place at Millennium Place on Thursday, Dec. 18 and Friday, Dec. 19. Tickets are 19+, $20 for general admission and $18 for Whistler Arts Council members.

On Thursday, the revue is being held alongside a new show at the Scotia Creek Gallery.

Skiing Under the Influence's official opening takes place at 5:30 p.m. Theatre doors open at 7:30 p.m., with the show starting at 8 p.m.

On Friday, the doors open at 7 p.m. There is also an official after-party at Buffalo Bill's.