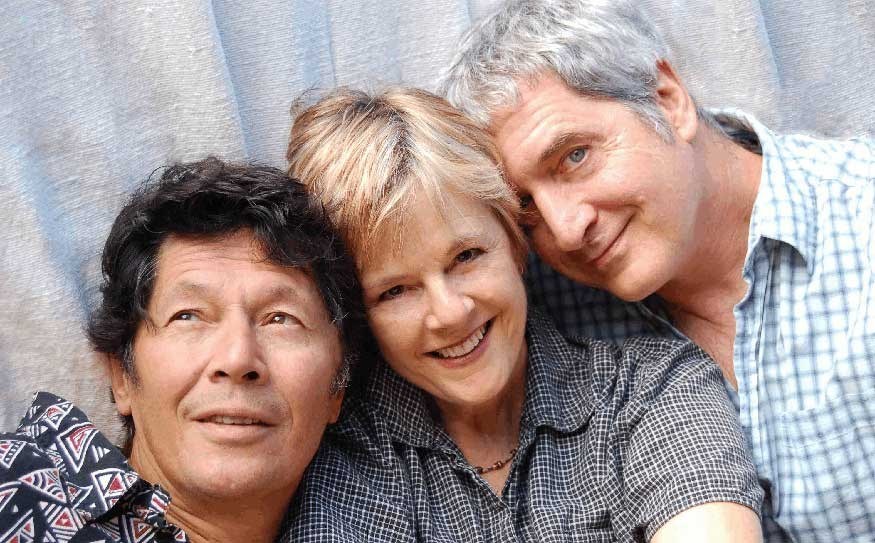 Pied Pumkin has moved beyond discovery, for the most part. After 38 years of playing together, they've slipped into a smooth comfort, with each other and with the crowd. The songs that they play are little specks of gold carried with the breeze into the air.

But life has its surprises and there are discoveries at every turn, modest as they may be, if you're open to them. The band has discovered something, as have the couple thousand people nestled on the lawn at Jericho Beach on the Friday night kick-off of the 35th Vancouver Folk Festival, for which Pied Pumkin — Rick Scott, Shari Ulrich and Joe Mock — have been invited to perform.

The discovery is this: they sound as fresh, as in tune and, somehow, as charming as they did during their mid-'70s heyday. They have not played together in four years. There's timelessness to their songs — the irreverence, the goose-bump raising melodies, the quirky arrangements — that have remained in the hearts of their fans.

Imagine that! Here, at Jericho Beach, with Pied Pumkin leading the crowd on a melodic joyride, with aging lady hippies swaying and shimmying in the 27-degree late afternoon sun, a crowd of long-time Folk Fest attendees — many of whom have seen this band perform in Folk Fests decades ago — rediscovered in their hearts a small space they had reserved, and may have forgotten about completely, for the Pied Pumkin. The applause was enormous when they finished their set.

"There was a feeling of being honoured as elders (at that festival) that I really enjoyed," Ulrich says with a laugh.

As elders. Right. That doesn't scare her at all?

"No, no. That's the good part of (getting old). The aching back and the sagging butt — that scares me," she laughs again, "but that sense of history... that we share with some of the performers and a lot of the audience. That in itself is unique, that you have that longevity and that connection with the audience, with each other and with your peers."

It's the connection with the audience that has largely sustained them as a unit after all these years. They formed in 1974 in Vancouver and were quickly praised for their bold arrangements and irreverent humour. They played together until 1976, when Ulrich left to join the High Bar Gang, and Scott and Mock continued on as the Pied Pear before going their separate ways for solo careers.

Twelve years later, they decided on a reunion tour. The fans, it appeared back then, never forget about the Pumkin. The year after, they did another reunion show, and another after that, when, after a few years, they decided that the appetite for Pumkin was substantial enough that they were no longer "reuniting" but simply "returning" once every year for a short tour.

But it became too difficult to sustain — Shari with her multiple musical projects, Scott with a successful career as a children's performer, and Mock raising a family in France. The Pumkin fell by the wayside for four years, but it was always in the back of their minds, ready to be rolled back out onto the road.

"A lot of people wanted to have it," Scott says. "Playing the music is, most of the time — not always —just so amazing and powerful, what's not to like about it?"

We're speaking by phone in a three-way conversation three days after their Folk Fest performance. The pair bats the conversation between each other like siblings, twining dialogue around each other much like they do with their harmonies while performing. It certainly doesn't seem like they'd been separated for four years, but rather like they'd been sharing a tour bus on a month-long jaunt across the country.

After all these years, it's the connection between the three members that has kept it going. Some bands do it for the money. Some do it to reignite past glories. Others do it because they have no other skills. Pied Pumkin does it strictly because it's fun.

Says Ulrich: "The miraculous thing is, we don't seem to forget arrangements. Even with that big long gap of, what, 12 or 15 years, we sat down to play and all the intricate arrangements that we had were all still there in our brains and in our hands. Well, more our brains than our hands. It's remarkable that they still stay in there."

Their successes have been modest, of course, like discovering flakes of gold whilst panning in a river when you were younger. Their songs aren't hulking nuggets like, say, Rolling Stones songs. You'll never hear Pumkin pumping through bar room speakers.

But they're not meant to. There's a quaint beauty to the Pumkin.

Hearing them is like finding those flakes of gold, which you've kept in a little plastic container in a drawer and happen upon years later while searching for something else, and they bring you back to that time, that fun that you had, when they were first discovered.