Confessions of love, loss and always taking the biggest cookie 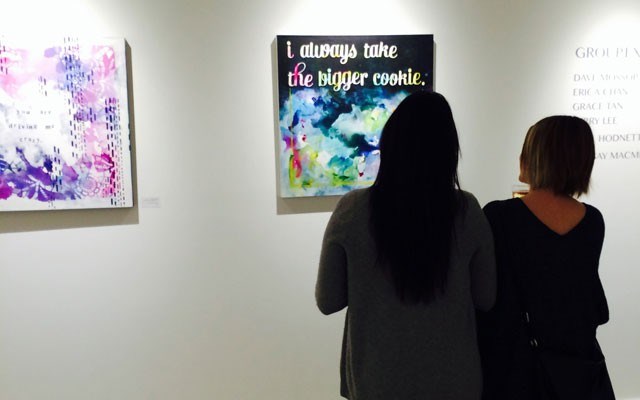 True Confessions Artist Jamie Smith's new project invites people to go into a confessional booth (above) and tell all. A new painting (right) may be the result. Photos Submitted

For a year, painter Jamie Smith worked as an art teacher in Abu Dhabi, and when she got back to Canada last spring she pondered her next move.

"I moved home and I was an art teacher. I felt that it wasn't right for me, I had always wanted to be this... artist, but no one really tells you how to be an artist. They just say you should do it if you can," she says.

"I decided to get a studio and I started painting. I thought about all the time I spent in the Middle East and I kept coming up with the theme of veils. I met women there and taught girls, who in my classroom I would be able to see, but when they went outside into the world they would be completely covered. I thought about what we see and feel in those situations, but it was not my culture or where I am from, so I thought about how we do that here."

From there, she thought of things more culturally familiar to her, such as confessional screens and safe spaces.

The result is her new show Confessions, now on at The Crystal Gallery until Feb. 15.

Smith was already placing her own messages in her paintings and then burying them in colour.

"They were quite personal and I wanted to cover them up. So I added my own veils in the paintings, patterns and images and different layers of paint. I realized I had found a kind of peace with what I was working through and needed to write about on these canvases. I thought 'What if I open this up to other people?' because I found a huge therapeutic quality to getting out these confessions of mine," she says.

So Smith started to invite people to confess on her website.

"I didn't know if it would work at all; I booked an art show at a gallery for one night and thought people coming to see it could fill out forms. People could help me out and give me a confession. And it worked! I had over 135 confessions that night," she says.

"The feedback I got from the first show was people telling me they had gone through many of the things I was painting about, too. It was an interesting twist because when I started it was to help the person confessing, and now I see this bigger community of people actually connecting."

So far she has created 15 paintings, all from anonymous stories, both happy and sad. People coming to her shows can add their own confessions by entering a private "confessional booth" to write them out. She now has 180 confessions to be inspired by.

"What basically happens is you will look at the painting and you can look at it by just reading the title and it will be "A Confession About..." and it could be about love, but you can also flip up a card and read the actual confession... I take each confession and if I am inspired I will paint it," Smith says.

"I went into it without thinking and it was really intense. I would get a heartbreakingly sad confession in my inbox and I would realize how many people are going through rough things. The themes of the confessions are so interesting, because we all think we're so individual. I have so many about love and so many, good and bad, about crushes that people have, they're quite cute. That sense that 'Oh, I'm the only one who never told a guy I love him' and there are three more in the same situation. Some I have gotten I want to get in touch with the writer, they are so sad. I want to give them a call, buy them lunch or something."

Along with love confessions another overwhelming theme is "loss" and the sadness that goes with dealing with it.

"And I get a lot of 'I made this decision' confessions where someone has left their husband after a decade and they don't regret it. Some are very funny, too. One of my favourites is 'I always take the bigger cookie.' That has become one of my most popular paintings," Smith adds.

Asked if there were any confessions involving Colonel Mustard in the library with a candlestick or other nefarious dealings, Smith laughs and says she has not yet had to call the authorities.