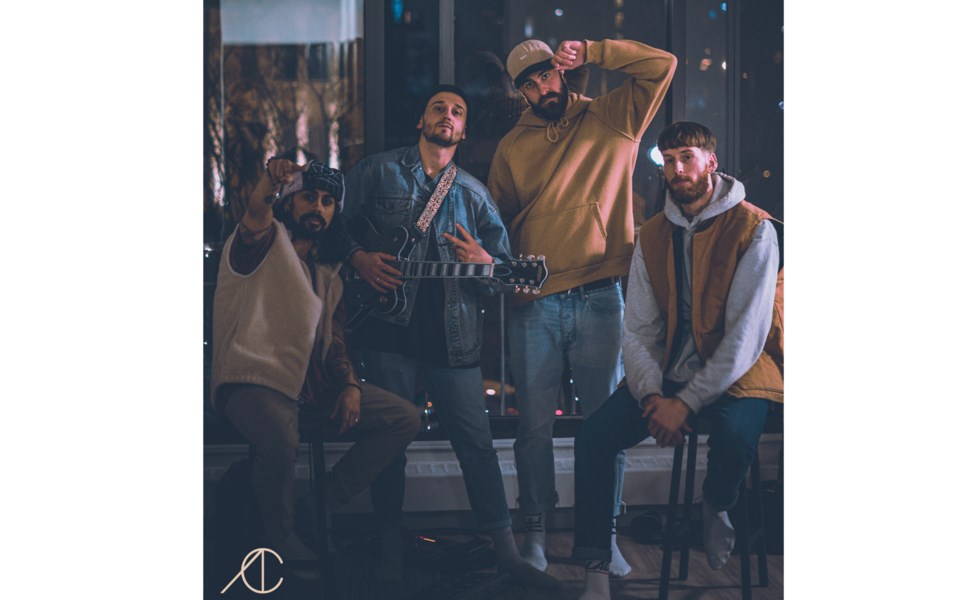 Conquering Alexander might have been born out of the COVID-19 pandemic, but to trace the group’s true origins, you have to go back to 2014.

That was the year Sebastian Rubio and Elliott English first met in Whistler while working at The Keg.

Rubio, originally from Chile, had been a writer since he was 15 and English had been playing guitar just as long.

“We would go to the Crystal and do open mics,” Rubio says. “He’d do riffs and I’d spit rhymes.”

That informal jamming came to an end when Rubio moved to Edmonton to pursue a Bachelor of Science degree in psychology. In the meantime, English was in Banff after finishing a biology degree in England.

“We were like, ‘Let’s meet up.’ He had his guitar and the first thing we did was started jamming,” Rubio says of their visit in the Alberta resort town. “It was a better level than what we were doing at the Crystal in 2014.”

But it wasn’t until he finished his degree and was passing through Whistler—with his eyes set on Vancouver—that Rubio connected with English again.

“I messaged Elliott—he was my closest connection and I knew he was in town. He said, ‘How’s it going? Let’s meet for a beer,’” Rubio recalls.

That night they headed back down to their old stomping grounds at the Crystal, where English introduced him to his friends William Ravenhall and William Osborn. “He explains, ‘I went to university with these guys. This guy is a singer and this guy is a rapper. I’ve been telling them about you. Maybe we can all hang out one day and jam and see what’s up,” Rubio says.

One drink turned into another and one day turned into that evening. “We were pretty tipsy, but it was still a fantastic jam session,” he adds with a laugh. “I had that feeling. It was incredible how the universe puts you in a situation where you feel like, ‘I shouldn’t be anywhere but here.’ Everyone was on the same page.”

“This time, it was a higher level,” Rubio says. “We connected at a deeper level. What our lyrics were saying, how the guitar was screaming, how our soul singer was doing voices, it came out beautiful. At the end, we were like, ‘This is something.’”

This being 2020, though, it meant that hopes of performing anywhere any time soon were on hold. Instead, the group got busy songwriting.

Mixing hip hop, R&B, and soul, with lyrics tackling the human condition, they turned out about 10 songs before cutting the list in half to create their debut EP, 9202, which they officially released on all streaming platforms on Saturday, March 27.

Rubio sums the tracks up: “‘The Realness’ is about how you gotta be real, accept things as they are; ‘Mama Don’t Play Around’ is about seeing where your boundaries are; ‘Lost in the Midst,’ you’re on a journey, keep grinding; ‘No More Love’ is about self love, everything you need to have it. We don’t need that extra validation.”

It’s all rounded out by “Society Soldier,” a song about following your path rather than societal standards.

Adding another unique twist, while the album is largely in English, it also features Spanish and French.

“Me being from Chile, I started rapping in Spanish back in the day,” Rubio explains. “I developed this English persona; it was a novel thing there. For me to express everything I had in me, I had to express myself in Spanish and English. Why limit myself to just one?”

With an EP launch behind them, and the prospects of in-person concerts uncertain, the group is still forging ahead with a commitment to spreading their music, despite the times.

“Our vision is, we want to do this for the rest of our lives,” Rubio says. “We want to grind and travel doing this. Of course, it’s hard … After the EP, we expect more hard work. We have more material, we’ll keep going to radio, push an online presence, get on playlists. We want to be on tour in 2022. If it can’t be this year, it has to be next year.”

For more, check out instagram.com/conquering.alexander.