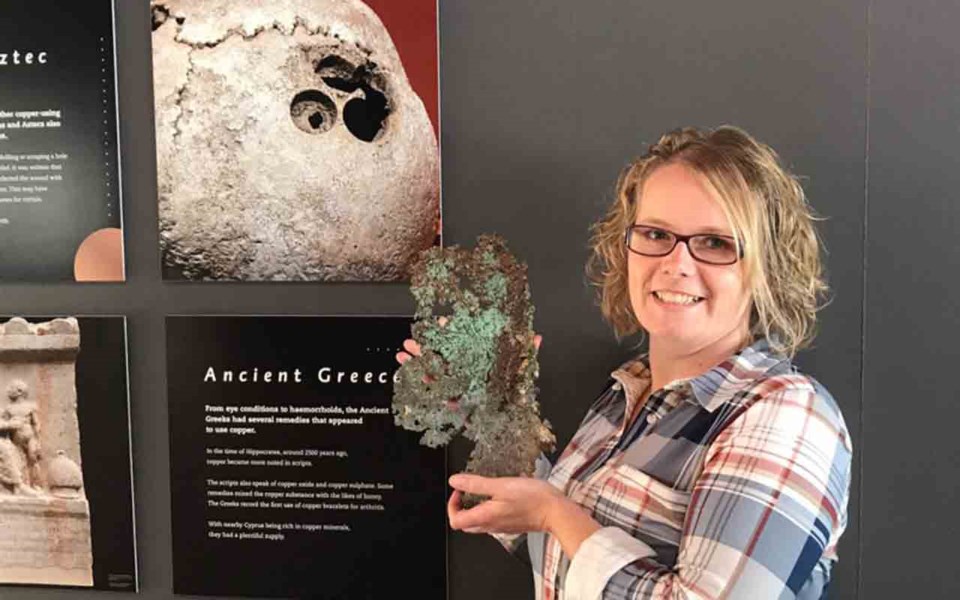 The Britannia Mine Museum’s Diane Mitchell, curator of education and collections, with a sample of an oxidized native copper ore. Their summer exhibit “Copper: Bug Buster” launches July 18. Photo: COURTESY BRITANNIA MINE MUSEUM

If you're taking a rare outing during the COVID-19 pandemic, your first thought, admittedly, might not be to take in an exhibit about disease.

But the Britannia Mine Museum is taking a hopeful approach with its new offering, "Copper: Bug Buster," set to launch on July 18.

The exhibit explores the millennia in which copper has been considered — with varying effectiveness — as a treatment for superbugs and other diseases. The exhibit covers civilizations as far back as the ancient Egyptians, Greeks, Romans, Incas and Mayans using copper and its minerals to combat everything from eye infections and arthritis to infections and sore throats.

"We can't say definitively what they knew or didn't know, so some of it was probably not very valid scientifically," said museum executive director Kirstin Clausen. "But that's something that's been interesting, too, is that the knowledge of copper has been around for a long time."

Modern research, meanwhile, has shown that viruses or bacteria landing on copper are attacked by "electrically charged particles," according to a museum release. The particles first destroy the cell membrane before moving on to the inner DNA and RNA. Copper has also been proven effective against everything to norovirus, E. coli, Ebola and the MRSA superbug, while studies during the current pandemic found that the novel coronavirus lives on copper for only about four hours versus two to three days on stainless steel and plastic.

"We even have the conversation at work that we, being a copper mine, should change all our door handles to copper," Clausen chuckled. "We don't quite have the budget to do that, but there are some lessons there and I found that intriguing.

"It may be one of the things that businesses think about in the future: how do we incorporate copper into our new builds?"

Clausen said the museum bumped back its planned programming for the summer as the curatorial team worked to put together a timely display.

"Everyone is preoccupied by COVID and we thought, 'What can we do around copper and being a copper mine?'" she recalled.

Clausen noted that the exhibit consists primarily of information panels, as time constraints prevented preparing elements such as artifacts to include as part of the display.

The museum felt some effects of the pandemic as the opening of its TerraLab was delayed. The TerraLab explores the role of plants in mining remediation and environmental stewardship and is slated to open in August.

In the weeks since it reopened, Clausen said that the museum has implemented several precautions, with tour groups organized into small family bubbles and setting other caps, so attendees are encouraged to book their visits in advance.

"We aren't squeezing people on to the train as in previous years," she said.

And in terms of hands-on opportunities, Clausen said gold-panning troughs are sanitized after each family, while in the museum proper, there are sanitizing stations set up by each touchable element for people to utilize before and after use.