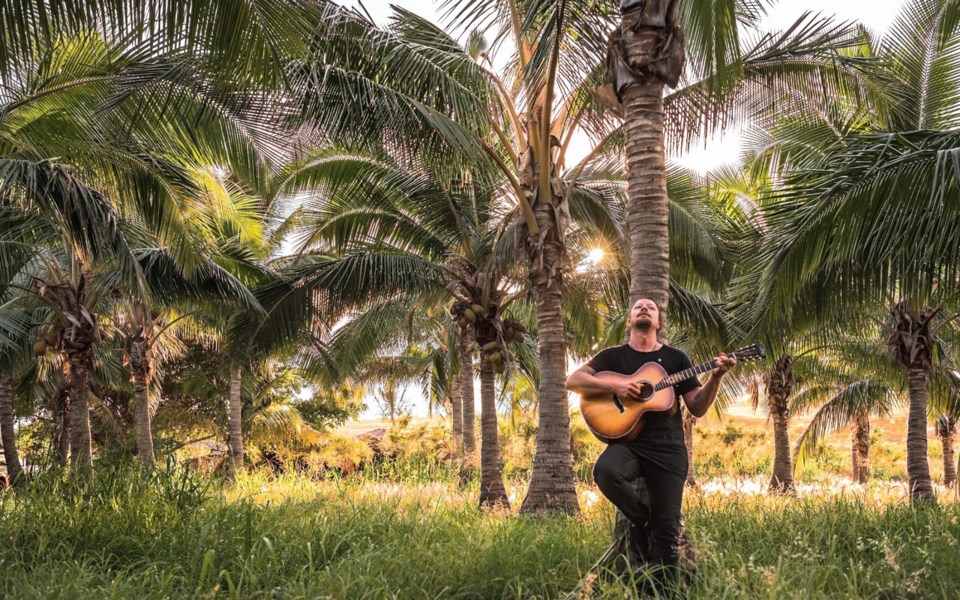 ESCAPE PLAN Daniel Wesley left the hustle of the Lower Mainland for the tranquility of the Sunshine Coast and quit his electrician job last year so he could focus on his music full time. The laidback singer-songwriter plays the Canadian National BBQ Championships this Friday. Photo by Jennifer Findlay / <a href="http://www.findlayphotography.com">www.findlayphotography.com</a>

At a certain point, Sunshine Coast singer-songwriter Daniel Wesley got tired of having to fit into a box whenever someone asked him what kind of music he made.

"I kind of do a lot of different things," says Wesley, "but I got in a habit of calling it beach music."

A lover of a wide range of musical styles, these days, Wesley hews more to a stripped down, reggae-tinged sound that led to his appropriately titled ninth album, Beach Music.

"My idea of beach music is something that brings your pulse rate down quite a bit," says the 37-year-old. "It's all about vibe, it's all about creating that atmosphere that you can take a break in."

Wesley had originally intended a more rock-heavy sound on Beach Music, but found the demo tracks he had laid down on his 1961 Gibson J-45 acoustic guitar already had everything he was looking for.

"We got to the end of the album, and I had brought all my amps and all my electric guitars and they had just been sitting in the corner collecting dust all week. I didn't want to add anything. I didn't think the tracks were going to say any more than what we'd already said," Wesley recalls. "I go through cycles where two or three albums will be fully all-electric, and some will be rock-y, and some will be more skanky reggae, and then I'll do a full acoustic album. It just felt like this is where it was headed. That's kind of where my headspace is still at."

Wesley's laidback sound aligns with his family's relocation, two years ago, from the hustle of the Lower Mainland to the relative quiet of Roberts Creek. That, coupled with Wesley's departure, last year, from his electrician job to fully focus on his music, has allowed him the time and space to develop his sound in a more natural, organic way.

"I took last year to catch my breath and find where I wanted to be," he explains. "Where we live has definitely been a big part of that. I would go light a fire and sit there and just kind of fiddle around and things would happen. I really find when I can let myself naturally find things, that's usually when the best songs come. I've grown my hair long and I think that's the whole idea: to just shrug off the daily."

Letting the chips fall as they may has proven fruitful for Wesley, but that laissez-faire creative process doesn't necessarily lend well to categorization—but then, neither does Wesley. Punk being his first love, the singer-songwriter actually got his start in a punk band he started with a handful of buddies called The Dropouts, which he jokes "at least 12 people" knew about at its height. He is more concerned with making music for himself than to fit into any preconceived genre.

"Music's music. That's why it's been hard for me to categorize myself, because I do have rocking songs and old-school rock and a little bit of reggae, a little bit of pop, singer-songwriter stuff. I just like writing songs. I never ever try to separate genres; I just write," he says.

"To be honest, this Beach Music thing was a far cry from anything I'd done before. It was a completely different sound, and I just did it because it made me feel happy."

Wesley plays Dusty's Bar & BBQ on Friday, Aug. 2 at 9 p.m. as part of the Canadian National BBQ Championships in Creekside this weekend. Tickets are $10 in advance at www.eventbrite.ca/e/daniel-wesley-tickets-65566811097, or $15 at the door.