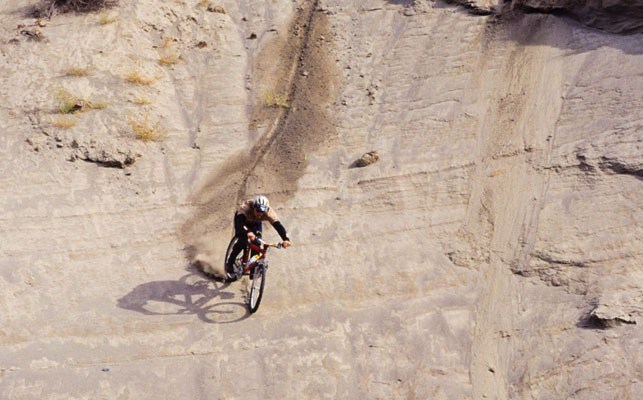 With a long and storied pro mountain biking career mostly behind her, you would think Darcy Turenne wouldn't have much left to learn about a sport that has made up such a significant part of her life.

But then, the history of freeride mountain biking isn't all that clean-cut, as you might expect from a decidedly DIY sport defined by rebels who lived mostly on the fringes of the '90s bike racing circuit, a history that Turenne delves into in her new documentary, The Moment, playing next month's Whistler Film Festival (WFF). "The film is about the history of freeride mountain biking and that shift from when mountain biking turned from being almost a leisure activity, very race-focused, and went completely the opposite direction and got a little wild and crazy," says the 33-year-old.

The award-wining filmmaker turned her lens to a sport she has adored since joining her junior high school's all-girls mountain bike club. Over the course of filming, she became struck by how little she knew of freeride's rough and tumble beginnings.

"In my world, freeride mountain biking had always just been there and I was only 10 years old when this stuff was happening. Obviously, I wasn't too on the pulse back then, and I discovered so much about all these characters of mountain biking," she says.

Some of those characters Turenne knows well from her athletic career, and she admits she felt immense pressure to get the story right.

"It was really nerve-wracking actually. I felt and still feel such a responsibility to share the story of a sport that has been such a big part of my life with absolute accuracy," she says.

"This is my love letter to the sport that gave me so much."

In a way, Turenne's move from action sports to documentary filmmaking parallels the trajectory of many of freeride's pioneers. She spoke with several of freeride's early champions who told her about what inspired them to document the sport they loved.

"Where things took off for freeride was when the Kranked movies came out, and they kind of showed the world a whole different side of riding," says Turenne of the series of extreme mountain-biking films that spanned from the late-'90s to the late-2000s.

Whistler also played a formational role in the sport's development, particularly through its bike park.

"The Whistler Mountain Bike Park kind of jettisoned this industry, and then freeride spread all around the world. Allowing riders to come to one spot and easily participate in the sport really made it take off," says Turenne.

"At the same time, freeride inspired the park. What these guys were doing in the backwoods was a huge inspiration for the building of the mountain bike park."

Now a veteran of the local film industry, Turenne returns to WFF this year to realize a dream of playing her hometown festival, a bucket-list item she credits in part to partaking in last year's WFF Doc Lab.

"I was just in the beginning stages for this film when I did the doc lab last year, and so it introduced me to a lot of really key players in the film industry that were able to offer me a lot of knowledge going forward," she says. "I was able to pick a lot of brains and move forward more confidently with this film."

Catch The Moment at WFF on Dec. 3. The Whistler Film Festival kicks off Nov. 29. For the full lineup of films, pick up next week's Pique.