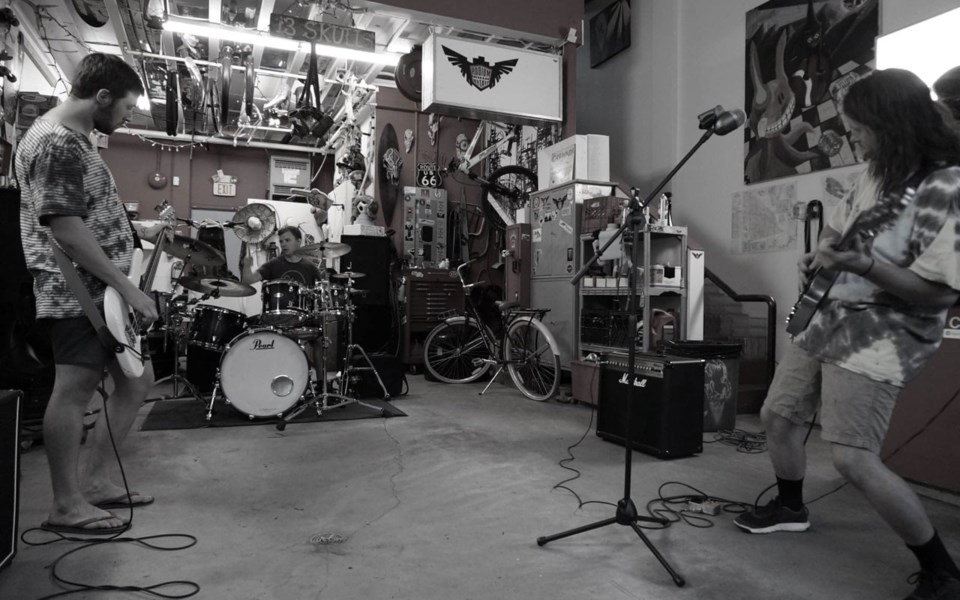 trio of ninjas Deadly Lethal Ninja Assassin (or DLNA) are set to perform at the Pemberton Hotel on Jan. 26. PHOTO submitted

Deadly Lethal Ninja Assassin (DLNA) were off to a good start when they were sidelined by injury.

With just two gigs under their belt, Rory Malkin, guitarist and vocalist of the Whistler rock band, broke his collarbone and needed surgery.

"That's put, somewhat, the stop on our progress, but in a funny way," Malkin says. "Now that I'm coming to the end of it I'm seeing it as a blessing in disguise. It's allowed us to talk about the direction we want to go in. It's given me time to actually sit down and work on original songs in my own time."

Now on the mend, the band—also made up of Scott Barrow on drums and Liam McCook on bass—is ready to hustle in 2019. They've honed a set of heavy rock and punk songs, ranging from Audioslave to Tool and Smashing Pumpkins, and they're preparing to record a few demos in an effort to secure more gigs around the Sea to Sky corridor.

"Since that first gig we've been practicing as much as we can," says McCook. "Every practice we try and dedicate time to originals, as well as getting covers down. The aim in the long run is we want to write our own music. It's hard to start out as an originals band in Whistler."

With so many established acts, it can be hard to be a cover band in Whistler too. To that end, DLNA feel they've tapped into a niche genre that's been underserved in the local music scene.

"A lot of bands in Whistler—no disrespect to them—they play pub rock; the sort of music that pleases everyone," McCook says. "There's nothing wrong with that, but we had a specific idea of what we wanted to play and we didn't want to compromise on that."

So far, the feedback has been good. "It was encouraging to have people come up to us (after the first gigs) and give us high fives and say, 'I can't believe you played that one song by that one band I loved,'" says Barrow. "It's not just guys. It's girls coming up and asking for punk songs. It's quite a range and it's surprising to see how much people want this type of music."

Another way to put it: "It's energetic (music) for people who ride the bike park all day," he says. "It's mountain bike music."

Musical tastes aside, the trio bonded over their love of mountain biking when they first came together in early 2018. McCook and Malkin first started playing together the previous fall with Barrow coming on after answering their call out for a drummer in the "infamous Whistler Winter Group."

Shockingly, Malkin waded through about 40 responses from drummers before landing on Barrow. "In huge cities finding a drummer is impossible, but you come to Whistler and everyone plays drums," Malkin says.

After establishing they were a good fit, the group eventually secured a practice space at Podium Auto Detailing in Whistler, run by their friend (also local artist) Randy "Randoid" Smith—who ended up playing another pinnacle role in the band's progression.

"We play a song by a band called Reuben ... who I've been a really big fan of since I was 14 or 15," says Malkin. "They have a song called 'Deadly Lethal Ninja Assassin' and before we had a name we were playing it at Podium. Randy hangs out when we're practicing and we were playing that song when he leans out from upstairs and says, 'What is that?'"

They told him the name of the track and he replied, "Cool I like that one," Malkin says. "The next week he was calling us 'Assassin' then 'Deadly Ninjas.'"

With a gig coming up and no band name under which to play, they went with Smith's nickname for them. "It was thrust upon us," Malkin says.

"There's something kind of sarcastic about the name—two Brits and an Australian, that represents us quite well."

Next up, DLNA are set to play at the Pemberton Hotel on Jan. 26. Tickets are $5 at the door and the show starts at 9 p.m.