Annual invitational photo challenge back with the winners now going on to Italian competition
Jan 9, 2015 1:00 AM By: Cathryn Atkinson 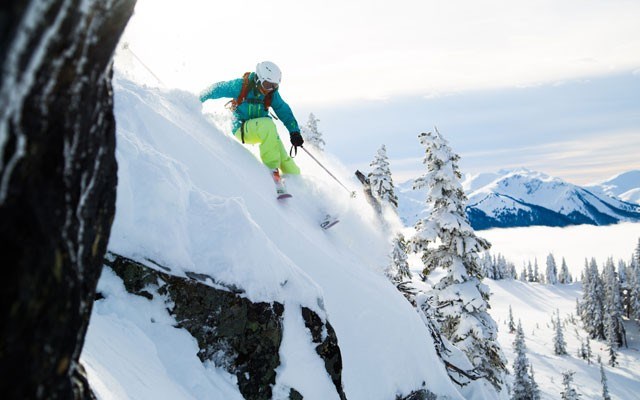 Take six photographers and give them just three days to shoot some of the most important mountain sport shots of their careers.

No pressure, you say.

The Deep Winter Photo Challenge, now in its ninth year, has invited five of the top sports snappers in the world to fight for a total purse of $10,000, with the winner taking home the title of King or Queen of Storms.

And for the first time, the winning photographer will get the opportunity to take part in the King of the Dolomites competition in San Martino di Castrozza, Italy, in February — arranged by competition sponsor Arc'teryx.

Each has 72 hours to shoot skiing and/or snowboarding action in-bounds at Whistler Blackcomb, capturing athletes at work and play in the mountains.

They also must also edit the thousands of images into a couple of dozen that will be shown as a slideshow to an audience of 1,500. The photographers pull together their own teams, including the athletes they shoot, for the competition.

The picture taking commenced on Wednesday, Jan. 7, ending at noon on Saturday, Jan. 10.

Last year's winner, Zoya Lynch of Revelstoke, says the biggest impact the competition had on her work was to boost her confidence.

"I felt super confident in my work and valued as a photographer afterwards. The panel of judges were all legends and to be recognized by them was a big victory for me, personally," she says.

"Career-wise, it was awesome. Any big exposure like that is great when you're a young photographer establishing yourself. It puts you on the map and gave me credibility. It's hard to be a young, budding artist, to let people know what you're worth and that they should be paying you for your work, and getting after the jobs."

Chris McLeod, industry, film and communications supervisor for Whistler Blackcomb, says the competition was moved to a week earlier because this is the busiest time of year.

"Moving it has allowed us to get photographers involved who have been unable to participate in Deep Winter in the past because they have been too busy with work opportunities," he says.

"We've been able to attract some amazing photographers. All four out-of-towners are people we have been talking to for years and this year everything aligned."

Helfrich was on the mountains prior to the start of the competition, looking at conditions following last weekend's major storm and is concerned that the rising temperature that followed could turn the snow into "mashed potatoes."

He first competed in Deep Winter two years ago.

"The first time I went into it I tried to do it myself and figured out afterwards that everyone else was outsourcing. I know I don't have to do it all myself. Every winning show has had people editing it and music," Helfrich says.

"I'm really excited to be in this. Last time they awarded me with Best Photo and that was really great. This year I know what they judges want to see. They want to see cool pictures and I've noticed the concept is key so I've tried to develop that."

The 27 year old has been a professional for almost six years.

The possibility of being crowned King of the Storms and showing his work in from of 1,500 people is "wild," Helfrich says.

Ashley Barker, the only woman competing this year, had been unable to participate in Deep Winter in the past. The 29 year old picked up a camera 11 years ago, after learning how to snowmobile and getting up the mountains.

"This time of year is definitely the calm before the storm. In years past, I would have shot quite a bit by now. As soon as everyone gets back from Christmas break and into the New Year, they've got a new budget," she says.

"I've been asked to do Deep Winter a lot, but I've never attended it. I agreed to do it seven years ago but I had to pull out when something came up."

Barker says she doesn't feel she has a local advantage.

"It's really cool that Whistler can bring such great talent from in the industry together and have a little healthy competition. I've seen a lot of photos from the contest that I think people wouldn't have gotten without being in it."

Deep Winter takes place at the Fairmont Chateau Whistler on Saturday, Jan. 10, doors at 7 p.m. with the slideshow starting at 8 p.m. Tickets are $25 and available at any Whistler Blackcomb Guest Relations location, online at www.whistlerblackcomb.com/deepwinter or by calling 1-800-766-0449.

The People's Choice Award contest goes live at www.whistlerblackcomb.com/deepwinter. All the photographers will have a Deep Winter image of their choosing posted to the site, allowing the public to vote for their favourite.