Didn't get RATM tickets? Check out the next best thing

Calm Like a bomb, Vancouver's Rage Against the Machine tribute band, plays The Crystal Lounge on Friday, March 13
Mar 12, 2020 2:00 AM By: Alyssa Noel 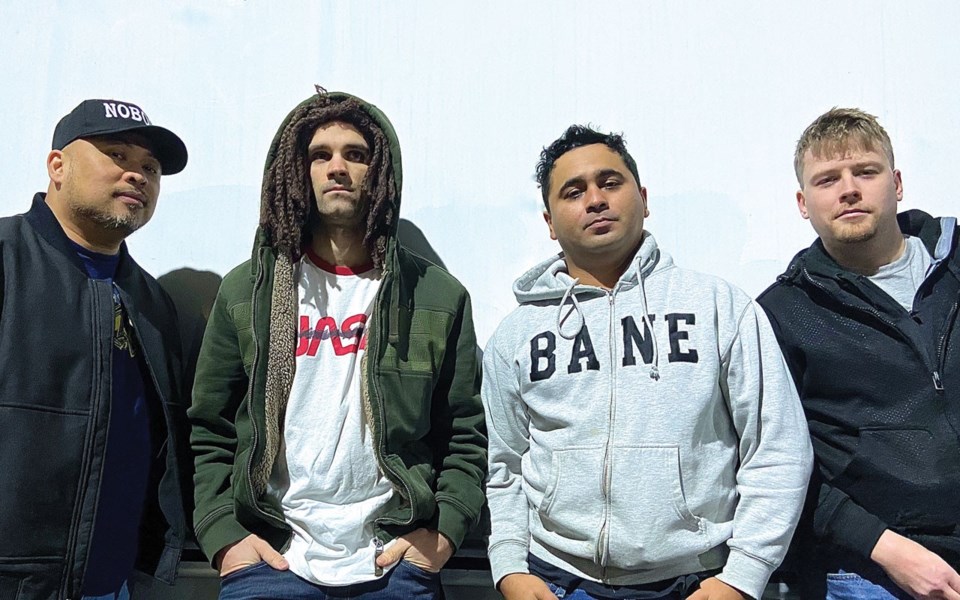 Vancouver Rage Against the Machine tribute band, Calm Like A Bomb, are playing Whistler for the first time this Friday, March 13. Catch them at The Crystal Lounge alongside Nevermind, a Nirvana tribute band. Photo submitted

What happens to a tribute band when the group they emulate suddenly begins to tour again?

In the case of Vancouver Rage Against the Machine (RATM) tribute band, Calm Like a Bomb (CLaB), it just increases interest.

"Because of limited ticket sales, and the expense, a lot of people aren't able to attend [the RATM reunion shows]," says guitarist Johnny Peralta, who plays Tom Morello's parts. "They couldn't acquire tickets. They've fallen back on us."

To that end, the group has seen an uptick in social media visits and requests for shows in places like interior B.C. and Vancouver Island.

However, its members will be at Pacific Coliseum for the much-anticipated RATM reunion show on May 1. "I'm the only one in our group who's seen them live," Peralta says. "That was in 1996."

But long before the reunion announcement, back in 2013, CLaB first formed to share the beloved political rock band's music. They started out with a different bassist and singer, with Peralta joining the group a little later on.

Initially, they simply played the band's songs. But after securing their current lineup, they decided to become "the equivalent of an Elvis impersonator," Peralta says.

"We wanted to perform with accuracy and detail to little nuances, from the clothing we wear to the way the music is performed," he adds. "We try to play the music as close to the recording as possible. That's what people identify with."

For his part, Peralta has spent hours watching videos of Tom Morello performing live. "Once you study his M.O., his favourite chords, positioning on the instrument, the tone, everything else just falls into place," he says. "Down to body movement, gestures, clothing, the reason he dresses the way he does—all the small details. It's great. People appreciate the little things. It's the subtleties."

It turns out Morello himself appreciates the effort too. When he didn't get tickets to one of Morello's sold-out shows last year, Peralta stood outside the Vancouver venue in a shirt and "Arm the Homeless" guitar—both just like Morello's. The road crew and manager spotted him, snapped a photo, went inside, and showed it to the rockstar.

"I was hoping to get an autograph, but the road manager came down and said, 'He wants you in the show,'" Peralta says.

Adding even more to the experience, Peralta woke up the next morning to discover Morello had shared that picture on his Instagram. The caption, posted on Nov. 8, 2019, reads this "dude is a great fan who made that guitar himself but because the show was sold out he had no ticket. I've never been happier to sneak someone into a show."

The first two dudes are not me. The first & third pic were taken in Vancouver. The first dude is a great fan who made that guitar himself but because the show was sold out he had no ticket. I’ve never been happier to sneak someone into a show.

"As long as you understand the artist—if they're worth understanding, and they really are. They're very genuine and honest people, very upfront—everything else falls into place," Peralta says.

Whistler will get a chance to see for themselves when CLaB plays The Crystal Lounge on Friday, March 13.

"We rotate songs in and out, and play the standards that everybody knows," Peralta says. "They way we build our set list and perform is ... [to] build and build and conclude with the biggest hits—'Bulls on Parade,' 'Freedom,' and 'Killing in the Name.'"

For a double whammy of '90s nostalgia, Nirvana tribute band Nevermind will open up for them.

"We're really excited to play Whistler," Peralta says. "Come out, have fun. This isn't just us performing—it's you coming to have fun with us."