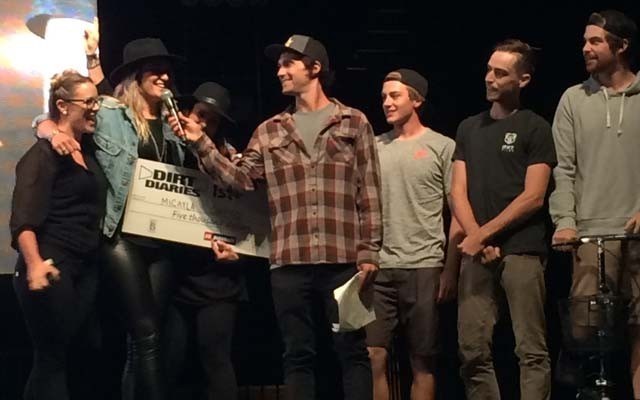 Micayla Gatto (second left) and her team after winning the Dirt Diaries with their rap parody of ‘Humble’ by Kendrick Lamar in 2017. Cathryn Atkinson

Sprawling out on the grass in front of Whistler Olympic Plaza has become an integral part of Crankworx.

While the majority of the two-week mountain bike festival—running from Aug. 10 to 19—is focused on riding and watching people compete, on the evenings of Aug. 14 and Aug. 15, the action turns from the bike park to the big screen.

First up, six filmmakers vie for the top prize as part of Dirt Diaries with four-to-six minute videos shot over two months—25 per cent in the bike park and the rest anywhere in the world.

Then, on the second night, six photographers (five of whom are invited, along with one “wildcard”) will share a slideshow of mountain bike photos they captured over 72 hours in Whistler.

“(Those events) round out what there is to do at Crankworx,” says Jennifer Smith, who helped organize both competitions. “You can go do all the demo stuff and go to the expo—that gives you the latest and greatest products out there. Then you can participate in the events (themselves) and ride or watch from the mountain. We have parties happening at night, but this gives you that in between too.”

For the past several years, organizers have selected athletes for Dirt Diaries and, in turn, those athletes would choose their filmmaking team to create a video.

But that’s changed for 2018. “Because the filmer was putting in so much work and the filmers were coming to us and lobbying (to be chosen), similar to Deep Summer, this is the artist competition,” Smith says. “We really wanted to put it with the right person, put credit where credit is due. Then the filmer goes out and selects the athletes.”

This year, the men behind the camera are William Binamé, who lives in Whistler, but is from Montreal; Damien Vergez, a director and producer based in Hossegor, France; Seth Alvo, who has made a name for himself on YouTube; Calvin Huth, a Vancouver Island cinematographer; Graeme Meiklejohn, a Whistler cinematographer; and Jasper Da Seymour, a Tasmania-based photographer.

“It’s people riding that line,” Smith says. “They’ve gotten noticed, they’re working heavily behind the scenes, but this is a good way to amplify (their work).”

Heading in to its seventh year, the event has established itself as a way for emerging filmmakers to make a name for themselves. The prize money isn’t too shabby, but participants also walk away with a clip that they own the rights to, Smith adds.

“In the industry, things have changed. Film has taken off,” she says. “It’s a key part of the mountain bike industry. With Instagram and the way it’s shaped the creative side of the industry, a lot more eyes are on Dirt Diaries.”

Nearly 10 years in, this photo competition might be well established, but it doesn’t get any easier for its six competing photographers.

“People jump in and they’re super excited or they can go, ‘Can you let me get my head around this?’” says Smith, describing photographers' reactions after they're invited to compete. “It’s pretty big. A lot of people involved in really creative and artistic things spend a lot of time away from the people who consume their product. I think it’s really putting yourself out there… (to) put on a photo show in front of 5,000 people.”

That’s not to mention how the photographers get there. After a quick orientation, all six photographers head out into the Crankworx hubbub to shoot photos for 72 hours. Then they edit and create a slideshow to screen in front of the crowd.

This year, the photographers are almost all entirely based in the Sea to Sky corridor, including John Entwistle, Mark Mackay, Chris Pilling, Clint Trahan and Hailey Elise as the "wildcard." The one exception is Nick Nault, who calls Fernie home.