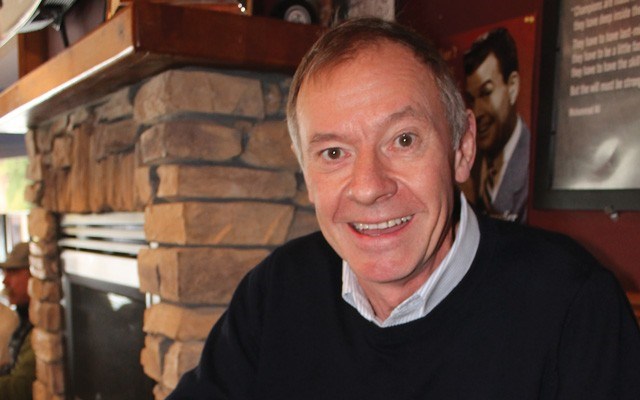 Cartoonist Adrian Raeside is a great person to have lunch with on St. Patrick's Day.

Two Guinnesses into it and the craic and laughter are flowing. Listening to the tape now, there is definitely an interview in there somewhere.

Topics vary and flowed with the stout. Take the social media's impact on cartoons.

Raeside opines: "One of the things that disturbed me the most about how the Internet has changed things for cartoonists, is that instead someone not liking a cartoon 20 years ago and finding a piece of paper and writing about what a bastard I am, or how wrong I am in a letter... now with Twitter, someone can right away say they hate you.

"They don't think it through like they would with a letter."

A Whistler resident for 20 years, he turns 60 this year.

"I carried on doing the editorial cartoons until I realized my older work was better. I was doing better work 20 years ago instead of now. So I just quit," he says.

"It wasn't a difficult thing to do. Whether you're writing or drawing it's the same thing in terms of creativity. When you look at something from the past and say, 'That is better than what I am doing now,' then it is time to stop.

"I don't want someone to say, 'That Raeside, he was really good before electricity.' I miss the paycheques, though."

But in a new dawn of creative potential offered by the likes of Justin Trudeau and Donald Trump, does he not miss it?

"No. No. That morning daily deadline, when you're trying to fill that blank piece of paper if there's nothing going on. And then you think that you've done a cartoon before — I have no idea. I've done thousands of cartoons. On my website's database, I've got 6,000," he says.

But if he sees B.C. Premier Christy Clark — a rich subject — doing something foolish, isn't that tempting?

On top of his political work, he was writing cartoon strips, and animated TV scripts.

But the artist hasn't stopped creating, not by a long shot.

Tails Don't Lie 2: A Pack of Dog Cartoons is the second compilation of Raeside's cartoons gleaned from his The Other Coast comic strip.

"The feedback you get back from a strip compared to a political cartoon is different, which I like," he says.

Each pup in The Other Coast is based on a dog he knows or has known. The doggie thread was started in a different cartoon he created 20 years ago. The Other Coast was picked up and syndicated in 1990.

"I kept the dogs out for while, but just as in life, as soon as a dog turns up, it takes your life over," he laughs.

"They took it over in a matter of months."

The impact was huge.

"I have readers write in and tell me that they've just lost Sparky and I put the name in, and because I work six to eight weeks ahead on deadlines. And then I forget. Then I'll get an email from someone telling me they can't believe I did that," Raeside says.

Among his other projects is The Rainbow Bridge: A Visit to Pet Paradise. It's an illustrated book of how a boy, Rick, is devastated by the death of his dog Koko, but is taken to pet paradise by a canine messenger and is put at ease.

Initially a children's book, Raeside says that adults have picked up on the message and are very moved by it, too.

"Because people love their pets and they get so upset. I've had grownups tell me that it was a real comfort to them and helped," he says.

"Death is a momentous thing; I wanted to do it in a gentle way."

Tails Don't Lie 2: A Pack of Dog Cartoons will be published by Harbour Publishing on April 1. It will be available at Armchair Books and on amazon.ca, as well as bookstores in Vancouver.