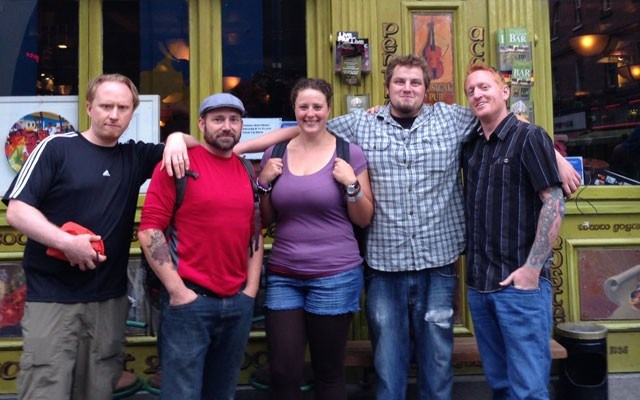 Later this month, the Dubh Linn Gate Pub is holding its first-ever Irish Music Festival weekend — and the partying spirit of St. Patrick's Day is very much invited.

It may not be March 17, but if you hear the unmistakable Celtic rhythms of the weekend you'd be forgiven for checking the calendar, says organizer Diane Rothdram.

The five acts playing the Dubh Linn Gate haven't performed there before; some are local, some from further afield. The festival runs from Thursday, Sept. 25 to Sunday, Sept. 28.

All are coming thanks to a new Dubh Linn Gate location now under construction in Vancouver, with the second pub due to open in 2015.

Rothdram says they wanted to push ahead with testing new bands.

"We thought it would be a good idea to try out some new music in our room," says Rothdram.

"Vancouver's Dubh Linn Gate will be a similar size to the Whistler location, with a real focus on live music, pouring pints and good food. All of that great stuff."

Two locations will allow them to book performers over a week.

"It gives us the opportunity to cast our net a little bit wider and see what else is out there," Rothdram says.

"We thought why not do a music weekend in September and try a bunch of different bands?

"We get approached by a lot of bands and it is hard to get a sense of what material they have. You have to have a lot of music because in the winter they are playing five sets. And there's the energy level and the talent level we are looking for. This gives the bands the chance to do what they do."

Cormac Pope of Seattle's The Bog Hoppers — which headlines the festival on Saturday, Sept. 27. at 8 p.m. — says it will be the band's first visit to B.C. in order to perform. He describes their music as Johnny Cash, meets Irish music, meets Americana, along with covers of traditional Irish music and originals.

"We've played with a lot of local (B.C.) bands like The WhiskeyDicks, and they play (in Whistler) a lot," says Pope.

"But we've not broken into that scene and we're pretty excited to get our foot in the door. And we want to make our way up there more often, we're so close."

In an interview during the Get Shamrocked Festival in San Diego, Pope says Canadian Celtic music bands, such as The Real McKenzies and The Mahones, get a lot of love in the U.S. at festivals like this.

They are happy to now return the favour, he says.

"It's part of our branching out. We haven't done a lot of touring, but this is a new step. We're an independent band, so everything comes out of our pockets. We've been saving money over the last year," Pope says.

A month ago, The Bog Hoppers took on a potentially daunting tour of Ireland. They started in Dublin and traversed the southern and eastern edges of the republic, performing in Waterford, Kilkenny, Killarney and Cork, among other places.

"We did a two-week tour through there, met a lot of people. It went over really well with people over there," Pope says.

"My family's all in Ireland, too. So we did the big family reunion there. There were probably about 150 people and we played a show for them... We'd play really small pubs where the band would take up the entire pub and then we'd play bigger rock venues. It was really cool to have the whole gambit of venues."

What did they learn in the cradle of Irish music?

"We learned how expensive it is," Pope laughs. "Renting cars for nine people and all the hotels, and touring around. We learned a lot about ourselves as a band... it was like we were all at camp. It really opened us up.

"And every day we would play. Here we'll play every weekend, but we were playing every night there. It really opened my eyes up for what it's like for acts that tour non-stop for 20 years. Man, it is a tough job to keep going... but they get tight with the music."

Whistler can expect a band that is "not too super rowdy, but high energy."

More about The Bog Hoppers and samples of their music can be found at www.reverbnation.com/theboghoppers.

The other performers include Celtic and folk musician Paul Filik on Thursday, Sept. 25, Vancouver duo The Flanagans, on Friday, Sept. 26, at 8 p.m., Whistler band The Sociables, on Saturday, Sept.27 at 3 p.m., and Chris Witoski on Sunday, Sept. 28, at 8 p.m.