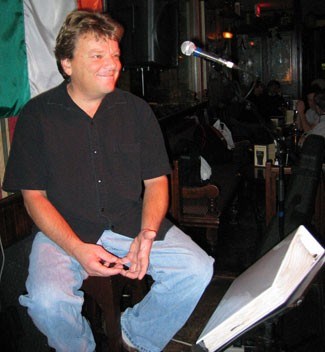 "I was a bit skeptical at first but I found brilliant instrumental takes on some traditional Christmas tunes and many great originals. If you like Tull..."

"This album has everything: rock, blues, reggae, Latin and country. Stellar playing by two of the best instrumentalists anywhere. Lindley is an unsung musical hero."

"Bruce Cockburn is one of the main reasons I got interested in acoustic guitar more years ago than I like to admit. This album continues his long tradition of great song writing and instrumental prowess as he works through jazz, rock and folk."

4. Live at the Point — Christy Moore

"A fabulous live CD of one of Moore’s one man shows at The Point in Dublin, Ireland. One of the greatest Irish folk talents in peak form. The sort of artist who records albums in support of his live act, not the other way around."

"I decided to revisit these tunes after seeing a Joni documentary on CBC. This is the singer/songwriter genre in its finest form, some of the greatest tunes ever written."

"Check out fiddler Moritz Behm’s ‘Beauty,’ Cam Salay’s ‘Farmhouse’ and John Bottomley’s ‘Star in the Singing Grove’ – all great local artists who deserve a listen. Thanks to everyone who supports live music venues around Whistler. Have a great season, folks!"