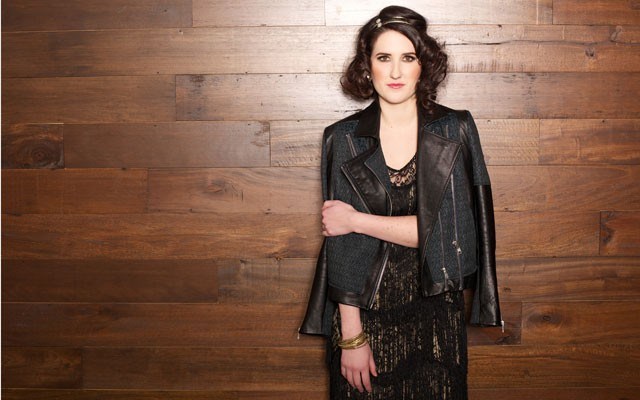 Jazz singer Ellen Doty tries to set a shining example with her music.

The Calgary chanteuse's new album, Gold, is adding lustre to her young career. The idea behind the album title had nothing to do with bling or prizes.

"I had found my 'gold' in music. It's something that is very precious to me and I'm giving everything up to follow my dreams," she says.

Now 26, Doty is meant to be in the fourth year of a geology degree at the University of Calgary but decided instead to follow her muse.

"I gave it up to pursue music full time. I was doing a music minor with geology, and then I studied jazz at Carleton in Ottawa," she says, adding that she supplemented this with private music lessons at the Julliard School in New York.

Currently on a national tour, Doty says she has found that jazz is still loved in the lounges and clubs across the country.

"We are pretty mainstream friendly, I call it pop jazz. It's a little bit mixed and I have found that it attracts a broader kind of audience, not just the pure jazz lovers. People my age and in their 30s and 40s like it, kind of a Norah Jones-type thing," Doty says.

Interestingly, earlier this fall she crowdfunded the money needed to go on tour. She far surpassed her hopes to raise $10,000, raising $17,815.

"We're really grateful for all the support. Overwhelmed, actually," she says.

"I loved the crowds in Montreal and Toronto, but one of our favourite shows was in Cape Breton, where we opened. They were really welcoming."

Other influences for Doty include Nat King Cole, Ella Fitzgerald and Michael Bublé.

Released in May this year, Gold is Doty's first full-length album, coming after an EP release in 2013. Doty received a grant of $15,000 from the Alberta Foundation of the Arts in order to complete the album.

"It goes a long way for an artist starting out," she says.

She is particularly pleased to be independently releasing an album of original music.

"It has been really exciting. A lot of albums have jazz standards, but I decided to do all my own music. I feel like I have a really good connection with it and it's meaningful to me. It's nice to be able to do that," she says.

"It's just so much fun to meet people all over the country... And we've had some interest from labels that saw us perform in Montreal."

The debut single from Gold was "No Good Man," a jazz-blues song that tells the story of a 1950s housewife with a no-good husband.

The album has been playing well on college radio and is at number one on a jazz list in Kamloops.

Doty and three other writers — Oliver Miguel, Kyle Zavitz and Josh Crowhurst — worked together on the songs for Gold during a residency at The Banff Centre.

What's it like to have four writers on a song?

"It's wonderful. There are just so many ideas floating around and it's pretty easy to move on things pretty quickly. They had worked together before and it flow really naturally," she says.

"Sometimes it's a little more difficult because somebody wants it a certain way, but I think we can into it very open minded and that made it pretty easy."

Doty has a close connection with the Fairmont chain, having performed at their hotels in this current tour and even filming the video for her single "That's Love" at the Fairmont Palliser in Calgary.

"Most of the venues we've been playing are jazz clubs and concert halls, but I did perform every week for the last three years at the Fairmont in Calgary," she says.

"I have a really good connection with them and they've help set me up with other Fairmonts.

She is making her second appearance at the Fairmont Chateau Whistler over three days, performing at the Mallard Lounge from Nov. 10 to 13, along with her quartet.

When it comes to her music, Doty says the show is wide ranging, from beautiful ballads to high-energy songs.

"I really like our arrangement with the musicians. It's very acoustic sounding and I enjoy playing in the arrangement that we have right now. I'm looking forward to sharing that," she says.