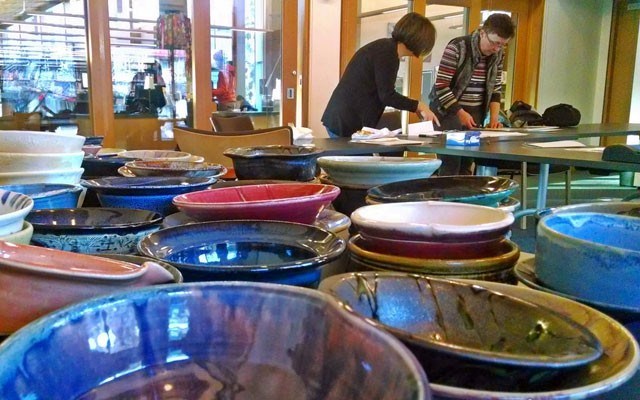 "Empty Bowls" is an event where people purchase a handmade bowl and fill it with delicious soup made by some of the resort's top chefs. This is the first year the pottery club has organized it, though it has taken place in other communities.

Chefs from The Four Seasons, the Grill & Vine and Alta Bistro have already agreed to make soup for the night, says one of the organizers, Mary Ann Collishaw.

Around 100 bowls have been made especially for the event. The pottery club hopes to raise $3,000, which will be distributed to food banks in the Sea to Sky region.

"Pottery is a really community-oriented activity. We're really excited. Visually there is such a connection, we doing it in the Istken Hall at the SLCC (Squamish Lil'wat Cultural Centre), which is a round room. Then there are the bowls and we all work on wheels," Collishaw says. "It's really easy to grasp the concept of what goes around comes around."

Empty Bowls will take place at the SLCC on Friday, Feb. 21. Tickets are $30 from the SLCC, at Kay Austen Pottery in Squamish or at whistlerpotteryclub@gmail.com.

Along with the soup there will be bannock supplied by the SLCC and non-alcoholic beverages. There will also be a cash bar.

Squamish metal artist Fran Solar has won her category at the 2014 NICHE awards in Philadelphia.

Solar was one of five finalists in her category, Metal: Fabricated or Forged, and the only one to weave strips and threads of metal, which she does on a traditional loom.

Her entry was called "Pleated Vessel" a multi-coloured woven cylinder. Solar has been weaving for more than 40 years.

Solar discovered she'd won online via Pinterest on Jan. 19, when all the category winners were listed. More than 2,000 artists entered from across North America.

"Apparently a trophy is given to each of the 35 winners, so I can have that on a shelf in my studio!" Solar said via e-mail.  "The prestige is immense and I'm feeling quite overwhelmed to be honest — I'm done with artist angst!"

The competition ran alongside the 2014 Buyers Market of American Craft exhibition, which took place in the city from Jan. 18 to 21. The Niche Magazine competition finalists were shown at the same time.

In Whistler, Solar is represented by Mountain Galleries at The Fairmont.

Winners increase their visibility to international art buyers and collectors. Her work can be seen on her website: www.francessolar.com.

Local singer-songwriter Adam Giles Levy is releasing a four-track EP called Green Socks and is inviting all to its launch party at Blacks on Jan. 25 at 9 p.m.

"The night's a showcase, really. We're going to play songs from the CD and other original material," Levy says.

"When you put it on iTunes they ask you to pick a style and I'm a big David Gray, Paul Simon fan so I thought I'd go with whatever they say. iTunes classifies them as 'pop-folk.' At its heart it is popular music based around vocals and guitars."

The EP was recorded at Nimbus in Vancouver and was released in Europe in October. Levy is currently working on a full-length album in Whistler with the same team, which is due out this summer.

Green Socks can be found on iTunes, the Adam Giles Levy Soundcloud page, or at adamgileslevy.com.

The Whistler Film Festival (WFF) is having its first-ever Oscar Party to celebrate the 86th Academy Awards.

The festival is rolling out the red carpet for the bash at the FireRock Lounge at the Westin Whistler on Sunday, March 2, from 4 p.m. to 8 p.m.

Guests are encouraged to dress up in their best Oscar-worthy garbs, as film characters or movie stars, with prizes for the best dressed. There will be an Oscars pool for pre-show predictions and a raffle.

The event is hosted by filmmaker and WFF's programming manager Angie Nolan.

Tickets are $25 per person and available online at whistlerfilmfestival.com or by phone at 604-938-3203.

Quest University Canada in Squamish has a vacancy for its artist-in-residence program.

The program allows the artists in residence to offer courses in their craft and in the creative process, providing students with opportunities to develop creative and artistic skills. Additionally, the artists share their work with the university and surround community through installations, exhibitions or events.

Applications are being taken from those working in the visual arts, drama, creative writing, dance and music. Other mediums will be considered.

Resident artists normally come to Quest for six- or 12-week periods between September and April, teaching one or two courses. The remainder is to support students through open sessions and other activities.

Those selected are given tutor status, accommodation and compensation.

Applicants can visit www.questu.ca for more information. Screening of applications is ongoing.

A public concert by the Whistler Community Band reported as due to take place on Saturday, Jan. 25, at Millennium Place has been postponed until further notice, say organizers.