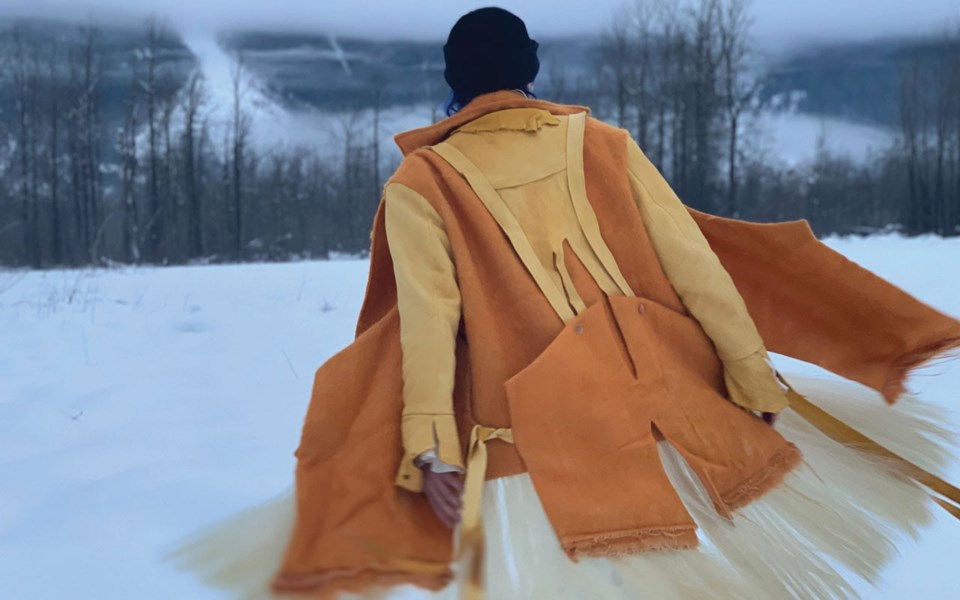 Growing up in Kelowna, Curtis Oland was always aware of his connection to the Lil'wat Nation.

"My mother's family (including) my grandmother, she's from the Lil'wat Nation. There was that connection to Mount Currie and to my family there," he says. "We'd go to powwows and visit friends and family and participate, but it had never really been a full-on immersive experience. It's been an in-and-out experience for me."

But Oland, who is part Lil'wat and part Scottish, forged a deeper connection with his heritage through an unlikely medium. "It wasn't until I started doing fashion that I've started making an effort to connect and communicate with the community there," he says. "With a lot of Indigenous people, that connection to the land is really important and that respect for the gifts of nature; what you take from the land is a sacred process. Whether you're creating art or for your own sustenance, you have to have that balance and understanding. When you look at my work, that's the biggest thing I like to exhibit."

While he started out going to art school—with a focus on sculpture—Oland became interested in fashion during his third and fourth years of school. "I was fixated," he says. "I was watching fashion TV, I discovered Alexander McQueen and this art form that was about expression through the body and a creation of fantasy. It was almost like a façade, a costume, something you put on, a mask (in which) you transform into something that's otherworldly."

That passion led him to study fashion design at Ryerson University where he was awarded the Emerging Menswear Designer award at Toronto Men's Fashion Week in 2017.

That major win helped him launch his Curtis Oland brand. "I used my second collection to explore and express myself through the medium," he says. "The market in Canada is very conservative. It's very challenging to create something extravagant and expect Canadians to buy it and wear it. I wanted to use it as an opportunity to be creative and create something for my portfolio."

The launch of his brand was a little too much too soon, he says. So, after that second season, he decided to move to London and work under an industry expert to gain some experience.

"I learned a lot really quickly," he says. "I got thrown into the industry and had a great time."

Then, last June, organizers of Indigenous Fashion Week in Toronto got in touch with him. "They wanted to sponsor me for a showcase here in London," Oland says. "There's a big installation we've done—16 designers—each representing a different country and I got to represent Canada."

That showcase, called Brave New Worlds, The Changing Landscape of Fashion, ran from Feb. 11 to Feb. 24 at Somerset House in London as part of London Fashion Week.

Oland's installation featured a stretched canvas that looks like a cedar tree—an homage to his Indigenous culture—with a projection of a film that was shot in and around Vancouver and in Mount Currie. "The film was really important because I was collaborating with other Indigenous artists from around Canada," he adds. "A lot of it was about the film and this collaboration. We created a meditative space that talks about our relationship to the land and engagement with the land, that spiritual, sacred exchange."

On top of that, the space also included six mannequins adorned in Oland's designs. "It's been my start up of my brand again," he says.

Overall, the experience was a rewarding one. Oland says he connected deeply with counterparts from all over the world.

"We made these beautiful relationships," he says. "There's a similar strain of consciousness in all our brands we're working on. A lot of it is very sustainability focused. We're thinking about ethical methods of creating and thinking about the industry in a way we want to change it. It was quite inspiring to showcase alongside these people."

For more on the showcase visit www.somersethouse.org.