Feeling the Push, the Pull

Matchstick gives viewers the best of both worlds with two film premiers
Sep 15, 2006 8:59 AM By: Nicole Fitzgerald 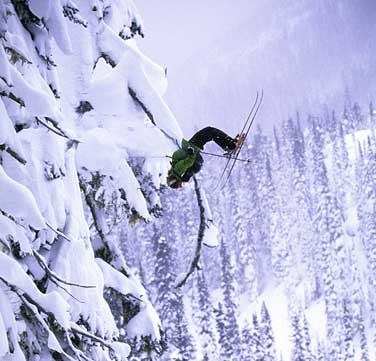 What goes on behind the 90-foot cliff jumps? Find out Thurs. Sept. 21 at Roundhouse. Photo submitted

Looking for non-stop trick after trick from the world’s top big mountain skiers? Or do you want to watch what goes on behind the 90-foot cliff jumps, the lifestyle big mountain skiers live and the culture they experience in the exotic places they visit?

Matchstick Productions delivers two films this year catering to both tastes: one theatrical-version called Push where lifestyle joins the adrenaline-rush drops, the other called Pull where storytelling is dropped for non-stop action.

Push premiers Thursday, Sept. 21 at 9 p.m. at the Roundhouse Lodge on top of Whistler Mountain. Sweatshop Union will perform at the Push afterparty at 11:30 p.m. at the Garibaldi Lift Company (GLC). Pull premiers the following night Friday, Sept. 22 at 10 p.m. at Garfinkel’s.

“The theatrical version has a lot of storyline,” explained cinematographer Riley Poor. “It tells trip stories and gets more into the lifestyle and cultures of places traveled to. The other is athlete inspired where the athletes (edited) their own footage together… There are two kinds of people: those who want something to be entertaining all the way through and learn something. Other people just want to see the best ski action. We give people both.”

Matchstick first introduced this double whammy approach last year with The Hit List and The Hit List Remix . Riley says producing two films is easily done because the team always has more footage than they know what to do with. In addition to producing renowned ski films reorganized by the best names in the industry, the U.S.-based production house also shoots and produces a yearly television series, commercials, corporate videos and a mountain bike film in conjunction with Freeride from Nelson, B.C.

Over the past few years, Matchstick upped the lifestyle component of their major films, tying in the big-air segments with storylines, which later inspired a seven-part television series aired on an American network.

Audiences will be following the tales of the world’s best big mountain skiers as they navigate their way around the globe with footage taken in Norway, Japan, China, Alaska and Canada. Most of the films’ footage takes place in B.C. with Whistler’s incredible snowfall last year putting the mountain out front.

“Last year brought us some of the best footage we’ve had in years as far as powder skiing,” Poor said.

“Both Rory and Mark Abma really put their noses down this year,” Poor said. “We got some pretty amazing segments as far as footage goes. They definitely had the most impressive segments. Ski park, backcountry, out of a helicopter: whatever we threw at them, they were killing it.”

Bushfield nailing a 90-foot tabletop jump with a switch double back flip is a film highlight — the same stunt he unsuccessfully attempted at the X Games competition.

“He lost a ski,” Poor said of the X Games stunt. “He probably would have won (if he got it). It’s a pretty crazy trick.”

The Colorado-based production house is premiering the two films in Whistler because Whistler athletes make up the majority of the cast, along with B.C. mountains boasting the heaviest screen time in both films.

“Whistler is kind of our second home,” Poor said.

Check out the Push trailer at www.mspfilms.com.