First you Shaikh it, then you shake it

Ethno-beat DJ and producer to celebrate winter solstice in Whistler
Dec 17, 2010 8:12 AM By: Susan Hollis 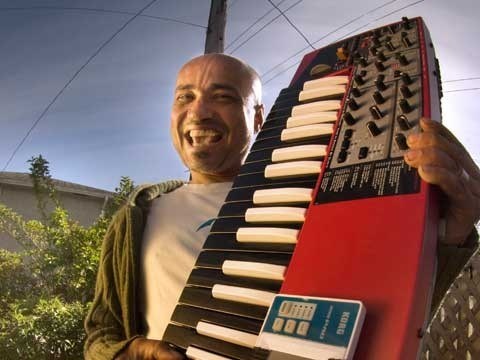 When Adham Shaikh takes over the beach stage at Shambhala Music Festival in Salmo, B.C. each summer, every half-naked body dancing on the river starts to groove a little deeper. It's a common scenario for the Kootenay-based DJ and producer; his music is designed to fuel all kinds of kinetic energy. Shaikh's signature sound - a blend of tribal instrumentals and electronic fare - tends to plunge his audiences into a primal frenzy, which is exactly what he plans to do at the upcoming Big Bang 2010 Winter Solstice celebration at the GLC.

"I'm addicted to making people dance, that's the thing that keeps me going," said Shaikh on the phone from his home outside Nelson, B.C. "My sets really validate for me that people really do connect, whether it's consciously or not, with the sounds from the past and that combined with the contemporary sounds - whether it's dubstep basslines or house or techno or trance, all these dance music forms - I think that they do notice."

Shaikh's referring to what he calls an innate and unavoidable human attraction to sound - an inkling that's been around since cavemen first started banging on dried animal skins. The advancement of musical technology might have dramatically changed the auditory landscapes, but from Shaikh's point of view, there's no need to forget the very sounds on which all music is based.

"It's in our cells, in our cellular memories," he said. "We come from that. We've all stood around the fire and heard drums and danced at some point and I think it's a real evolution of that. Not forgetting that stuff, and including it."

For Whistler, Shaikh did due diligence and designed his musical offerings based on knowledge he's picked up on the local demographic, demonstrating a musical confidence and sincerity that has dominated his 25-year career.

"I know that for Whistler I prepared a special set that is sort of moving more into the progressive trance and some really high energy tribal kind of rhythms and hopefully I'll be able to layer that and bring some world fusion sound in," he said. "I tend to read the crowd and feel it out. I am also really grooving to a lot of electro-swing these days, all this remixed music from the '20s and '30s, which is really exciting."

Often called a master of world fusion sound, a moniker he accepts with a shrugging grace, Shaikh is big on community - both his own and others around the world. His roots are diverse - he was born in England to parents of North Indian and English decent - and he has spent most of his life poking around in sonorous fare that's mostly unfamiliar to North America. He toys with Gypsy klezmer music and African drums, Indian tablas and Middle Eastern ouds - anything that triggers the inner early hominid.

"It really marries the ancient and the immediate and I think a lot of these instruments have such rich harmonics and overtones, they create such a rich waveform and when you combine it with these really pure tones and big kick drums and fine wave bass drums and play down these big sound systems... it's a really great marriage, especially when you fuse it with dance music," continued Shaikh.

As a Juno-award nominated producer, Shaikh develops various artistic projects under his Sonic Turtle label. He has released two albums - Universal Frequencies and Resonance , each representing different areas of interest within his musical pursuits. Both skirt the typical cheese factor so often found in world fusion music. He recently finished working on a solo album for Delhi 2 Dublin founder Tarun Nayar and is currently producing albums for B.C.-based songstresses Gemma Luna and Aspen Switzer. To diversify his portfolio, he wrote and recorded a soundtrack for a Knowledge Network documentary called the Edge of the World and is narrating and mixing the music for a new National Film Board short. The artists and projects he chooses diverge in content but are linked by a common thread - dedication.

"If they don't have it it's kind of like pushing a pea over a mountain with one chopstick," he said. "If the artist doesn't have that then there's nothing I'm going to be able to do short of doing all the work for them, in which case I'd rather just work on my own album."

When not producing, composing, or DJing, Shaikh tours with his band, Dreamtree Project, a classical Indian ragga dub fusion group that received a warm welcome at both the Vancouver Folk Festival and the Diversity Festival on Texada Island.

For more information on Shaikh go to www.sonicturtle.com.