For the love of art and each other

Painters Heidi and Ron Denesson support each other in order to live the artistic life together
Mar 5, 2014 8:00 PM By: Cathryn Atkinson 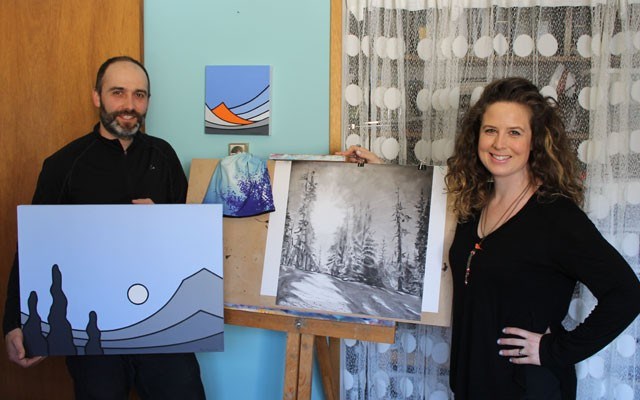 Preparations Ron and Heidi Denesson are currently working on pieces for their joint show later this year. Photo BY Cathryn Atkinson

Ron and Heidi Denesson got together while still students at Emily Carr Institute of Art and Design, and while love bloomed amid their developing artistic skills, the slopes also played a part.

Sitting in their Whistler living room — they settled in the resort a year ago but have longstanding ties here — the two artists explain it was sort of a coming together of opposites.

"Ron was the only person I knew there who snowboarded," Heidi says.

"And you were the only one I knew who skied!" Ron replies. "Our first date was a ski date! There really weren't that many other skiers in the college. Or snowboarders."

Both are painters, with Ron also a wood carver and Heidi's work extending to clothing design. Throughout their careers and now with two young sons, they have tried to take the artistic path and have ensured that they never strayed from it.

After 15 years together, they are preparing for their second-ever duo show, due to take place at the White Dog Gallery in August. They last showed together at Millennium Place in 2002.

The support they show for each other has been going on for so long that they agree they wouldn't know how to do it separately, as a couple or as artists.

"Totally. We feed off each other. The energy bounces off each other and the will to keep going," Ron says. "If she's down I can pick her up and if I'm down she brings me up."

Heidi agrees, adding: "That's huge. I often say that I am so lucky to be married to an artist, because if I wasn't I don't know... We get each other and we can critique each other's work. Our work is very different and there's no competition."

She said her husband's dedication to his craft would also get her motivated.

"If I'm on the couch at night, exhausted, and Ron's doing something at the table, I'll be like 'What at you doing? I need to do that!' She laughs.

Ron pipes in with what could be the couple's motto: "The good thing is that she understands what I'm doing and I understand what she's doing and we believe in it and it works... If she didn't 'get' what I was doing it wouldn't be as easy to keep going.

"We've been there, we want to do what we love but you've got to pay the bills and it's finding a balance."

The Denessons maintain studio areas in separate parts of their townhome, Ron works on the lower floor with access to his carving tools and the deck, where he also works. Heidi's space is on the top floor, with access to her samples and supplies. This gives them the space they need to create in isolation, which is as much part of their existence as artists as is their mutual support.

"I've worked with her for almost 14 years and also do my own work. I started painting for her and it developed so now I'm the production guy, carving, painting and involved with a lot of the public art pieces and installations. It has been a full-time job for years," Ron says.

This unique position with one of the foremost indigenous artists in Canada has rubbed off on his own work, which he carries out from home, though stylistically the two are very different. He is currently looking to get representation in Whistler.

"Because of my experience with Susan I've experimented with my own carvings. Landscapes," he says, holding ups a cedar landscape he is working on.

Heidi is represented by the White Dog Gallery. Her work includes images used on a banner for the Ted Nebbling bridge in 2001. She will also be at the One of a Kind Spring Show in Toronto from March 26 to 30 and the Refresh Market in Squamish on April 26.

She most recently moved into clothing design, with her photographic work appearing on printed leggings that can be seen at The Beach in Whistler and at One Earth Collection in Pemberton. She also designs silk scarves, beanie toques and other items with her own outdoorsy and surreal images. They can be seen and purchased at www.heiditheartist.ca.

Ron's work can be seen on his Facebook page: rondenessenart.

This summer the couple will also be involved in Painting the Peaks in and around Whistler, a plein air program put on by the gallery, which will see them painting at the Riverside Resort, Scandinave Spa and Nita Lake Lodge.