FORK IN THE ROAD: Our world really turned upside down 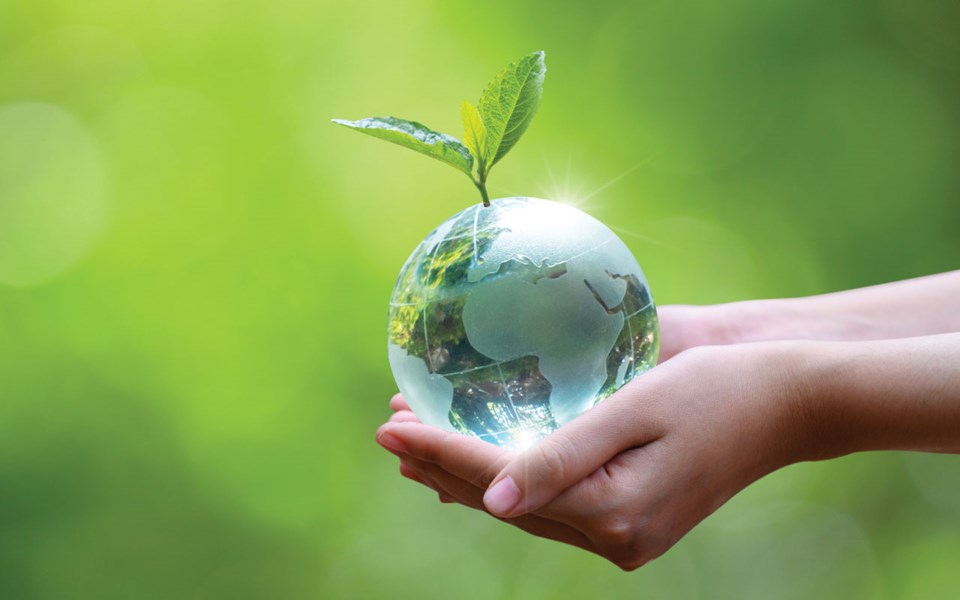 Pandemic or not, Earth Day should give everyone a cause for pause. Photo by Sarayut Thaneerat/gettyimages.ca

“Big spaces and the same faces” says the latest catchy mantra from the Resort Municipality of Whistler as the community hunkers down and makes international headlines with the P1 COVID-19 variant spreading like wildfire and a mass vaccination program that will hopefully help contain it.

Big spaces, yes, as iconic as always in the Sea to Sky. But I can’t help thinking that since the pandemic started, we’ve pretty much nuked the biggest outdoor space of all from our consciousness—our poor, beleaguered planet.

Under normal circumstances, Earth Day last year would have been huge—it was the 50th anniversary. But who even remembered it, never mind marked it by actually doing something extra, something green in the face of a scary virus that suddenly flipped our lives upside down.

This year, I’m a-feared, most of us are still hugely preoccupied, and the world beyond our bubbles remains a fuzzy blur.

Apparently even Greta Thunberg, who’s now 18, isn’t sure what she’s up to on April 22. But President Joe Biden, who’s organized a virtual climate summit of world leaders starting on Earth Day, has given her a lead.

“The things that they are going to present [at the summit] will not be nearly enough for what science is saying will be in line with the Paris Agreement,” Thunberg said. “So I’ll just be calling that out, I guess,” reports Lizzie Widdicombe in an online New Yorker article in the April 19 issue, one sporting lovely pink blossoms on the cover.

Greta, like the rest of us, lives a pretty cloistered life these days, only hers is double duty. For more than a year, she’s been living in a borrowed Stockholm apartment with her dad and two dogs while mom and sis live in the family home. This keeps her and her family safe and removed from critics, which says a lot about the state of our world but even more about her determination—and that of millions of young people—not to be silenced.

It was a massive oil spill off the coast of Santa Barbara in 1969 that prompted Gaylord Nelson, a junior senator from Wisconsin, to start Earth Day—a special day that would push us to re-think the state of our planet. It was all aimed at students like Greta.

In California in ’69 it was oil wrecking the coastline. In 2020 it was a series of insanely destructive wildfires largely fuelled by our changing climate. More than 4 million acres burned; 10,000+ buildings were destroyed. Thirty-one people died. The cost: More than US$12 billion.

Just stop and think for a minute how that money could be so much better spent. Or, here in B.C., when our province spent more than $220 million fighting wildfires in 2018 alone. What better things could that funding provide?

Such projections are fraught, but on the climate front alone, the Natural Resources Defense Council, which was founded in 1970, the year after Earth Day, projects that in another 80 years or so, America will be spending US$1.4 trillion a year to contend with storms, wildfires, sea level rise, heat level rise, changing water and agricultural regimes—the whole disastrous nine yards caused by us changing our climate.

Morgan Stanley reports that our climate emergency alone cost the world some US$650 billion in 2016-18, and that we can expect to see a one-third decrease in agricultural production in just 30 years.

Money talks louder than ever in our neo-liberal world, but what price the impacts on health, mental and physical, especially on those least able to weather the storms? The elderly; young people like Greta; people with little or no money, and fewer choices.

As for those oil spills that cost millions and billions to try and clean up, Andrew Nikiforuk, a great Canadian journalist writing in Hakai Magazine, cited a City of Vancouver report that concluded: “Collecting and removing oil from the sea surface is a challenging, time-sensitive, and often ineffective process.” In short, it’s pretty much hopeless. The BP disaster in the Gulf of Mexico, for instance, saw only about 25 per cent of the oil contained.

The UN’s own environmental agency points out the price of environmental damage we cause during primary production and processing. From mining to forestry, fishing and even farming, it costs us US$7.3 trillion a year because we don’t safeguard nature properly. How much would it cost to change?

The whole point is it’s much, much easier to respect and protect our environment, our beautiful planet, than it is to try and fix it after the fact.

Earth Day on Thursday, April 22 is simply meant to highlight that, and even while hunkered down in a pandemic bubble, we can mark it.

Plant a new, green something. Buy one organic item you wouldn’t normally. Go online and join AWARE and Whistler Naturalists. Go all day without eating meat. Try it again next week. Take the time and effort to recycle. Most important, take the time and effort to engage politically. Write a letter. Start a petition. Democracy doesn’t work in a vacuum, and our Earth doesn’t either.

The pandemic will end. We don’t want our natural world to.

Glenda Bartosh is an award-winning journalist who joined AWARE and Whistler Naturalists to celebrate Earth Day.