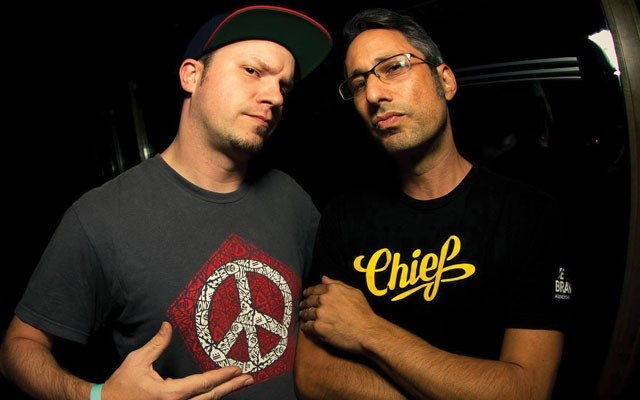 Fort Knox Five and QDup are bringing four decks to Tommy's and they hope you can handle it.

The Five's Steve Raskin explains how the mash-up works.

"We've been playing the four turntables, or CDs, at our shows for the past couple of years, we play simultaneously and we're building songs together. We'll have instrumentals in one song and be able to play our own original a cappellas, for example. Our original music is mixed up with contemporary pop culture sound," he says over the phone from the group's hometown of Washington, D.C.

The Five's longtime collaborator QDup adds: "By doing this, we're creating a live hybrid of a DJ set and an improvisational kind of set. We're both just up there jamming.

"We do have routines and things that we do more than once, but they become our own version of play on the DJ side. It's like a live remix."

Currently in the middle of a spring tour, these gigs together are new things to both sides.

"We started DJing together back in the late '90s in a crew together," says QDup.

"But it's only in the past six months that we've been touring."

"But we really enjoy all kinds of genres of music," Raskin says.

"Fort Knox Five and Fort Knox Recordings (their company) has developed an appreciation over the years for all sorts of funky genres. It allows us to bounce through different tempos, whether it is hip hop, glitch hop, breaks, house — we touch upon it and bring it into the overall sound.

"So the DJ set is catered to different times, we play different sets depending on where we are. What ties it all together is weaving in our original pieces and they become songs that are inspired by now. We are able to remix on the spot."

It sounds like it begs for a live album.

"The live set, the DJ set, is a unique performance. When we're in the studio we are creating the pieces we need to make a song and incorporate into these sets," Raskin adds.

The main result and their promise is a high-energy night with people "stomping around on the dance floor."

They both say that leaving all things political in Washington, a big urban centre, to come out to rural communities and an altogether smaller Canadian vibe is a great, great thing.

"For us it's amazing. It's so beautiful and it's so far removed from our usual environment. It's always an adventure. We've built up a close-knit group of friends there, too," Raskin says.

Whistler had become a regular pilgrimage for the Five, who got their big break as DJs when selected to open for Gwen Stefani on her 2005 tour.

"We love playing up there," says Raskin.

"This is our springtime tour and we're just hitting our favourite spots.

"We get to have our mini-reunions and mini-parties. It really started because we've been playing Shambhala for over a decade and built up fans all over."

Quite a few of these spots are in British Columbia, including side trips to the Okanagan and a first-ever gig in Courtenay on Vancouver Island.

"We love small towns and small venues because people come out and it's a full-on party. Better to have a packed small room than an empty big room!" QDup says.

They will also be playing in Vancouver with Okanagan DJs Stickybuds and JPod.

"B.C. DJs are amazing. I always say it's what they put in the water. It's a breeding ground for great DJs," Raskin says.

"For whatever reason, there was always a real affinity for funky music there so we spent a lot of time in B.C. We started coming up a decade ago. We have a very sympathetic kind of vibe with a lot of DJs there. Skiitour and Stickybuds are collaborators."