G Willy All Shook Up 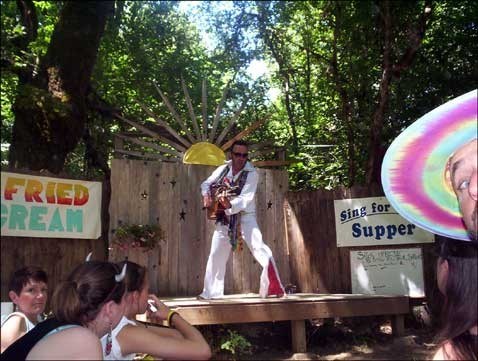 Listening to the signature track from G Willy’s new album Fair Songs , Country Fair Song encompasses what the local musician is all about – having a good time and rocking along with high-energy acoustic fun that just doesn’t stop.

The bluegrass-inspired track opens with a rollicking banjo and guitar line that paints the fair scene for the listener. You can hear the colourful chaos of the fair and see the open stage with musicians who are friends of many in the audience.

The song is an ode to a country fair both G Willy and fellow local musician Greg Reamsbottom, alias Grateful Greg, frequent in Oregon every year. The festival crowds go mad when they hear the anthem touting the freedom of the place with a gospel-like refrain.

"It’s a little tale," G Willy said of the song. "Ten years ago, Grateful Greg and I wrote it. It always causes a raucous."

It’s all about kind people, getting stoned, bouncing in the sunshine and letting your hair down. You can almost see the patchwork of salt-of-the-earth music revelers kicking up the dusty fair grounds.

The energy and enthusiasm behind G Willy’s voice compensates pitch problems. But for a first four-song album, not a bad companion for a road trip adventure.

G Willy is a bit of an adventure himself. He morphs to multiple stages around Whistler. He joins Reamsbottom to host an open jam night every Sunday at Tex Corleones. His long brown, pony tailed frock is no stranger to the Crystal Lounge, Tapley’s, Merlin’s or Citta’.

"I’ll be playing at Tapley’s and you can almost see the Citta’ patio from there and then I head over to the patio," Willy said. "That is the coolest part of it. There are so many venues to (perform) at in such a small area."

This gentle-spoken man off stage even unleashes his bottomless soul of silliness and creativity in a Grateful Dead tribute band. Sounds fairly straight up except he performs the songs Elvis Presley style – rhinestone studded white suit and all. He calls the show Elvis is Dead. A good sense of humour is in everything Willy does. A cartoon jester portrait of himself smiles on his weekly fan mail-outs, illustrating the joy the local musician is always trying to spread.

"Elvis is dead: It’s like being a clown. It’s a total goof off," Willy said. "I like to take music with a good sense of humour."

He enjoys traveling the Whistler patio circuit, but campfires are always his favourite stages. He hopes to move forward to a band setup soon to produce what he calls mountain music, a hybrid product resulting from his 12 years of making music.

The Elvis act is part of Willy’s musical spectrum that began with big hair, and heavy metal. Heavy metal turned to earth as he grew out of his Kiss T-shirt and spandex pants, resulting in a more organic music experience. Folk, rock and bluegrass work their way into the blues guitarists music score.

"I combine music with a great outdoor lifestyle of music," he said. "It doesn’t get any better."

Well maybe a little better if he could find a bassist. To get in touch with Willy, contact