Get Top Less at the Two Acre Shaker 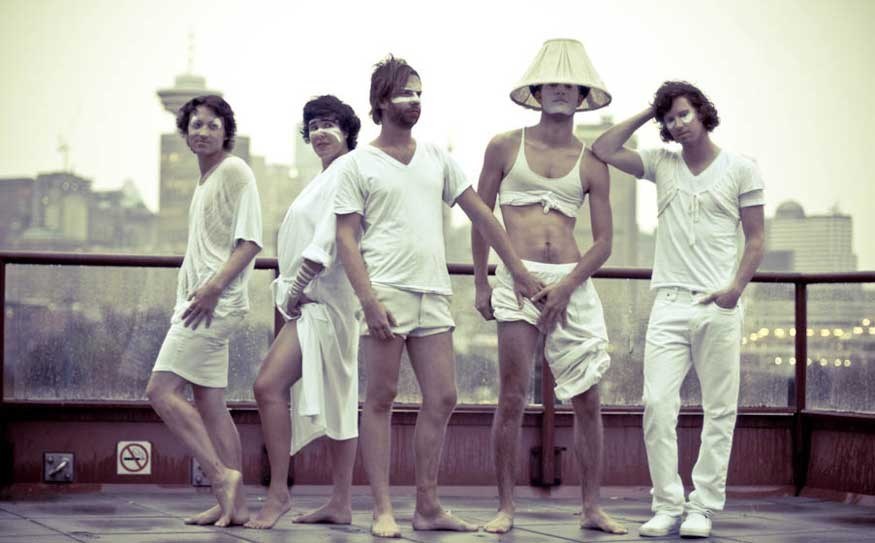 Michael Schindler probably spends more than he should on glitter. He says his band Top Less Gay Love Tekno Party spends around 50 per cent of its gross earnings at online party shops, stocking up on costumes, sparkles and other colourful stimuli that to some people might seem like an extravagant waste of money.

"Some people" is the key term here. For Schindler, there's simply no other way.

"When you see a bunch of idiots running around onstage with sparkles and wearing costumes, and hopefully if the music's good, then you'll get something out of this," Schindler says, as we chat at a Gastown coffee shop.

They've sold out three headlining gigs in Vancouver in just over a year, and have been featured in online publications as diverse as the Wall Street Journal and Austrian Gay TV.

And yet, Schindler has a tough time describing where exactly the band fits within the West Coast music scene.

"I don't even know if we do fit in," he says, noting they've been unable to land provincial or federal music grants — often critical for unsigned bands to function — for what he considers a "variety of reasons." Local promoters and "family-friendly" bands have distanced themselves because of Top Less's perceived status as a party band, or a joke band, or the fact that they use "gay" in the title.

"Pride hasn't even picked us up because I think they think we're a joke, even though we have gay people in the band," Schindler says.

But it's this element of distance that nurtured the band in the first place. Schindler and Torr met at the University of Victori, playing together in various bands and sharing a mutual disregard for the "surfer acoustic music" dominating the city at that time. They moved to Glasgow in an attempt to surround themselves with more eclectic artists and find a sound more in line with the art-rock and disco that was coming out of Europe at the time. They wanted to make music that steered away from heartache and the other trappings of pop-rock expressions. He wanted to inject some irony into the music. And some flare. And some glitter. Above all, he wanted to make intelligent dance pop, and to avoid the West Coast clichés that have dominated for so long.

"Someone called us 'reggae-tinged' the other day," he laughs." Reggae is, like, the furthest thing from what we're trying to do. How the f**k did you get reggae-tinged?"

Top Less has completed their long-in-the-making self-titled debut album, which Schindler hopes to release by the end of the year. He says they're currently shopping around to different labels in an attempt to gain more robust distribution. If they find no support, they'll release it themselves by December.

Top Less will return for their fourth appearance at the Two Acre Shaker, a.k.a., the Greatest Party of All Time, 2012 edition. They'll be doing a DJ set, featuring all the same elements Top Less fans have come to expect — glitter being at the top of that list.

The Shaker will be held at Mt. Currie Rodeo Grounds this Saturday. Other performers on the bill include DJ Woody, Scientists of Sound, Minxy Jones, DJ K-Tel, Kori K. and "top secret special guest DJs."

There is onsite parking and camping available with each ticket. For those without cars, or unwilling to drive home the next day in the expected rough condition, there will be shuttle service between the festival site and Pemberton, between 2 p.m. and 5:30 a.m. The shuttle is $2 per person and is an excellent way to transport your inebriated body back to town.

Tickets are still available, so go buy one lest you "suffer some serious ROMO (reality of missing out), according to Shaker co-founder/co-organizer Kirk Becker. For more information on where to buy tickets, visit www.twoacreshaker.com.

And then buy a ticket. Do it.