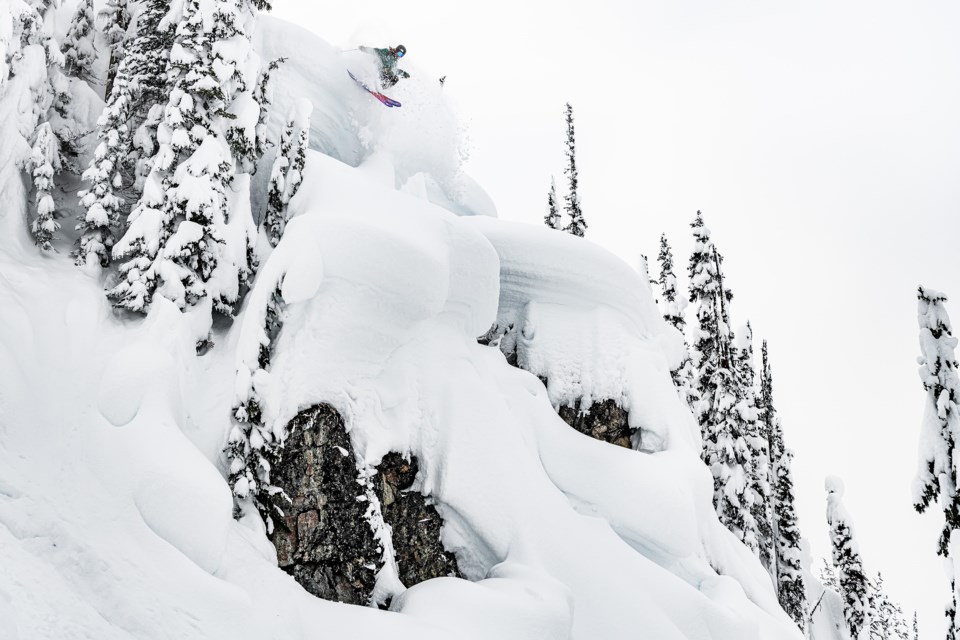 There is a laundry list of ways that TGR’s forthcoming ski movie Make Believe is anything but ordinary.

For one, filming was cut short by a global pandemic. For another, it doesn’t shy away from Squamish skier Nick McNutt’s horrific accident while shooting in the Pemberton backcountry.

On top of that, it’s set to debut in Whistler as a drive-in movie.

As the ongoing pandemic rolled into ski film premiere season, the Whistler Film Festival (WFF) decided to step in and help keep the stoke alive. The event will also serve as a festival fundraiser.

“It’s our 20th anniversary year and we’re all eager to get back on the slopes,” says Shauna Hardy Mishaw, WFF’s executive director and founder. “So the timing with TGR worked really well. We thought, ‘Let’s show everybody what they want to see!’”

While Make Believe might not feature some of the familiar faces that were set to shoot in places like Alaska in the spring, TGR still had plenty of time to capture winter action.

“We started filming stuff in December or January,” McNutt says. “It was the pre-COVID bliss of things being normal.”

Even the day of his accident, March 9, started out strong.

“We had skied big lines in the morning,” he recalls. “I was the only one doing runs in the heat of the day where the light is a bit too bright on things.”

While the rest of the crew was at the bottom of the mountain near a lake, McNutt decided to hit a pillow. Only, it broke off and sent chunks barrelling down.

Those chunks sent him through trees—where he believes his avalanche beacon got smashed into the “off” position so it wasn’t sending a signal—and to the lake below where he was buried about 120 centimetres under snow.

“The whole crew was sitting there watching it happen,” McNutt says. “Their reaction was immediate.”

One person immediately started to try and find a beacon signal while the others readied their probes and shovels.

Because his beacon had been shut off, they couldn’t pick anything up.

“Someone, a cinematographer, had a lucky [probe] hit the second time,” McNutt says. “To have someone accidentally hit you with the probe felt pretty lucky. We did everything right as far as snow safety; the snow was stable … It was a really solid crew out there and things went wrong with avalanche equipment failure.”

From there, Pemberton Search and Rescue attended the scene by helicopter. McNutt was transported to Vancouver hospital—and released a day before its first COVID-19 patient was admitted—with shattered bones in his forearm, a bruised heart, and bleeding in his lungs.

While he’s expected to make a full recovery, it’s been slow. (For context: he’s still been able to mountain bike and climb this summer.)

“The arm has been a work in progress,” he says. “It’s functioning, but I’ve been working on getting it back to full strength. Fortunately, you can ski without arms.”

The film doesn’t focus on the accident, but it doesn’t shy away from it either. The crew caught the pillow slide on film and while they ditched the cameras when it became a rescue mission, everyone was still mic’d up, so the audio is captured.

“It’s a good reminder to keep inspecting [avalanche equipment] regularly,” McNutt says. “If your probe is showing signs of fatigue, replace it. Don’t head into the backcountry with a plastic shovel. Regularly change your batteries—don’t leave them in over summer. It’s your last line of defence.”

While the accident is “part of the film, that’s a few minutes worth of the movie,” McNutt says. “A ton of the movie is classic ski action.”

To that end, while he won’t be joining the film on tour around North America this year due, of course, to the pandemic, he’s happy to see it will debut in Whistler to a live audience after all.

“It is one of the best parts of the film coming out—being able to share that with people,” he says. “Seeing excited people who are looking forward to winter, it’s a huge part of it for us.”

Catch Make Believe at the drive-in theatre in Day Lot 5 in Whistler on Sept. 29 and 30 with screenings at 7 p.m. and 9 p.m. Tickets will only be available in advance, as one of several safety protocols.

There will also be limited private screenings available for groups of 24 on Sept. 28 and Oct. 1 at the Squamish Lil’wat Cultural Centre. There is the potential to add more private screenings if there is demand, Hardy Mishaw adds.

“This pandemic hit everyone hard, but it also hit our charitable, not-for-profit hard,” she says. “We had to get really creative … We’re really excited to invite everybody to the drive-in.”