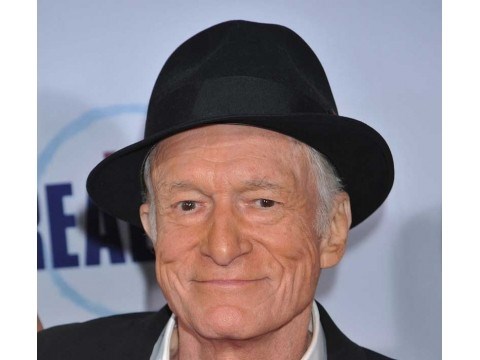 "The American Dream didn't come from Washington. It was created in Hollywood by new immigrants with enlightened ideas..."

He was the very embodiment of the brand. The ultimate playboy; the quintessential party guy. Surrounded by young women in skimpy bunny outfits and clad in his trademark smoking jacket and ubiquitous pipe, Hugh Hefner became the emblem for an entirely different path from the repressive and paranoid culture of 1950s America. Hedonism was okay, his new men's magazine proclaimed. And sex was okay too. In fact, as he puts it today: "My goal was to produce a lifestyle magazine for young men that didn't associate sex with sin." And then he laughs. "I wanted to get the message out that sex was a natural part of the romantic relationship. And that good girls like sex too..." He pauses. Laughs again. "Believe me - back in the America of 1953, that was the really revolutionary move!"

And therein lies the crux of a surprisingly interesting story. For although he's best known as the founder of Playboy - and the entertainment empire that grew in its wake - the 83-year-old Hefner (Hef to his friends) has tilted at the windmills of Puritan hypocrisy all his life. Whether challenging the sexual hang-ups of post-war America, or fighting against the still-rampant racial segregation of the Deep South, or arguing for more humane drug laws, or even speaking out against Washington's militaristic incursions overseas, Hefner and Playboy defined the leading edge of enlightened liberalism for half a century.

Surprising, isn't it? But then there's much to the Hefner story that defies the stereotype.

"This is what convinced me to make a movie about his life," says Canadian filmmaker Brigitte Berman. "I was fascinated by the paradox of Hugh Hefner. On the one hand, you've got this sexual, sensual man who lives the kind of lifestyle that many of us find difficult to relate to. On the other, you have a committed activist who never gets tired of fighting the good fight."

An Academy Award winner in her own right (for 1988's Artie Shaw: Time Is All You've Got ), Berman was "astounded and delighted" in 2006 when she got the go-ahead from Hefner to make a documentary on his life. She then spent months pouring through his considerable archives. And what she found there only confirmed what she'd felt from the moment she met the guy. As she puts it: "Hef is more true to himself than just about anybody I've ever met." She takes a breath. Continues. "Like most other people, I had a certain Hefner in mind when I started on this project. But the more I did my research, the more I discovered different layers to the man. As it turns out, he was the perfect subject for a film."

Appearing at this year's Whistler Film Festival, Hugh Hefner: Playboy, Activist and Rebel is sure to stir up even more controversy about the world's best-known playboy. And that, says the film's director, was totally planned. Using archival footage interspersed with contemporary interviews with such disparate characters as jazz crooner Tony Bennett, journalist Mike Wallace, folk singer Joan Baez, actor James Caan and Playboy centrefold Shannon Tweed (to name but a few), Berman reveals the paradoxical elements of Hefner's life without commenting on them personally.

"I was determined not to tell the audience how to feel or what to think," she explains. "That's why there is no narration in the film. I want the audience to make up its own mind about him."

The result is fascinating. As much a cultural review of the last 55 years of American history as it is a story about a man who took a contentious idea and grew it into an extraordinarily successful business, her film deftly peels off the different layers of Hefner's personality to reveal a slightly tragic character who seems to have spent his life searching for something he could never find.

Lasting love? Spiritual connectedness? A refuge from the hordes of philistines washing up at his doorstep? Who knows? But by the time the credits roll, one can't help but feel a little sorry for the old freedom fighter...

But don't tell Hef that. During our half-hour conversation last week, the octogenarian insisted he was quite content with the way things had turned out for him. "I'm a very lucky guy," he told me over and over. "I've always done what I enjoy. And I believe much of my success is due to that." Another happy burst of laughter. "It's been a great adventure, you know. I consider mine a life well-lived."

As for regrets, he admitted he'd had a few. "Friends lost, business errors made..." But then his tone changed. "But it's a dangerous game that one. I've learned over time that you can't just change one thing."

When talk turned to legacies, it became amply clear that Hef held no illusions on that score either. "Like Dr. Ruth says in the film, I will never get the credit I deserve for everything I've done because of the unconventional lifestyle I've led." He paused. Sighed deeply. "But what people refuse to see is that the two are totally interconnected. You can't have one without the other..."

The key, he said, was staying true to yourself. "I was the same kid in high school that I am today. I got in just as much trouble with the principal over social issues back then - even if advocating for swing music and jitterbugging at the school dance doesn't seem all that radical now."

And that may be at the very root of the Hefner mystique. "I was raised in a typical 1930s Midwestern home," he explained. "A family where there wasn't much hugging and kissing. I understood quite early the hypocrisy of our lifestyle. Saw how repressed we were. Understood the parts that needed to be changed."

Unlike most of his contemporaries, however, Hef decided to do something about it. And America has never been the same since...

Hugh Hefner: Playboy, Activist and Rebel will be playing on Friday, Dec. 4 in the conference centre ballroom.