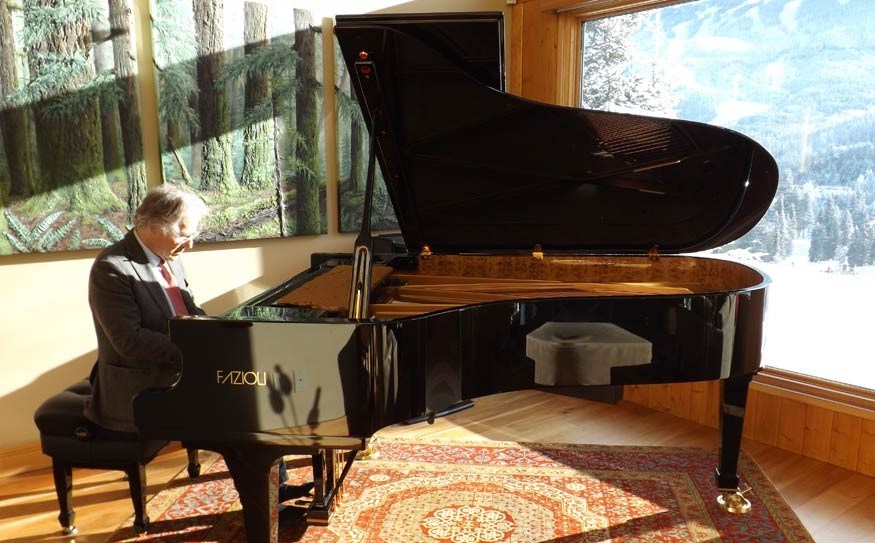 piano man Paolo Fazioli plays one of his pianos at a customer's Whistler home. Photo BY alyssa noel

While his instruments are some of the most expensive around — ranging anywhere from $80,000 up to $500,000 — the Italian piano maker scrunches up his face when asked about his most elaborate creations. "We do 85 per cent black and 15 per cent special edition," he says, his accent lilting as he answers. "We would like to maintain this."

Since unveiling his first piano at a musical trade show in Frankfurt in 1981, Fazioli's goal has remained simple: to create wonderful-sounding, well-crafted instruments. He was formally trained as both an engineer and pianist and he started the company as a way to combine his two passions.

"When I was done my studies there was a problem of what will I do," he says. "Will I be an engineer or musician? With this I was able to combine (them). Because the piano is a musical instrument, but it is also one (with a) very difficult, complex, technical side. The piano is kind of a machine with lots of things inside."

To that end, he carefully gather together a selection of technicians to handcraft the instruments, growing slowly from just three employees to 40. Currently, they produce around 120 pianos a year. "My intention is to stop increasing one day," he says. "To build a piano with our philosophy has a roof because if you want more quantity you must change the mentality. We want to remain with a limited quantity with controlled quality and giving the best product possible. This will be our future."

Despite the limited production, Vancouver has become one of Fazioli's strong markets, largely through Showcase Pianos in Richmond and Vancouver.

He made his first Whistler sale to a couple in May and last week he travelled to their home to sign the black $150,000 CK piano (The couple wished to remain anonymous for this story).

"We love researching things and finding beautiful things and enjoying them together," said the woman, who has been playing piano since she was a child and, later, earned a degree in music from the University of British Columbia. "Of course we were immediately thinking we'd be looking at a Steinway... We discovered the Fazioli in particular is an exceptional instrument in every way. The cabinetry is second to none. If you take the whole piano apart, every single part is beautifully finished. The actual instrument is amazing, incredible power in the fortes and pianissimos if you want to play them softly."

The piano is featured prominently in their living room, surrounded by large windows overlooking snowy mountains. "Even though I do play the piano quite a bit, a piano sits in your living room and is seen more than it is played," she adds. "We feel that it's a work of art. (Fazioli) put a lot of care and love into every detail of the instrument, inside and out."

That might be true, but as Fazioli has learned, it's still difficult to break into some parts of the high-end piano market, largely dominated by Steinway, the American and German piano company that has been making its instruments since 1853. Julliard, the famed performing arts conservatory in New York City, for example, has been an all Steinway school — until recently when Fazioli sold them a piano.

Fazioli was travelling to the school the day after visiting Whistler to see the instrument.

"A school must keep variety," he says. "They must keep the possibility to know everything, not to (have) only one kind of piano because the monopoly against the culture... It makes sense that students can (try) a cross section of pianos. The school must give this possibility. When the student is not given this possibility, I think this is not correct."

The same is true for musicians, he says. Many get locked into sponsorship deals, but several have become loyal to his brand as well. Among the converts are Chicago pianist Herbie Hancock and classical Bach pianist Angela Hewitt. "You know, we have lots of young musicians," Fazioli says. "All of them are very enthusiastic about our pianos. We receive letters every day with compliments. This is very nice."