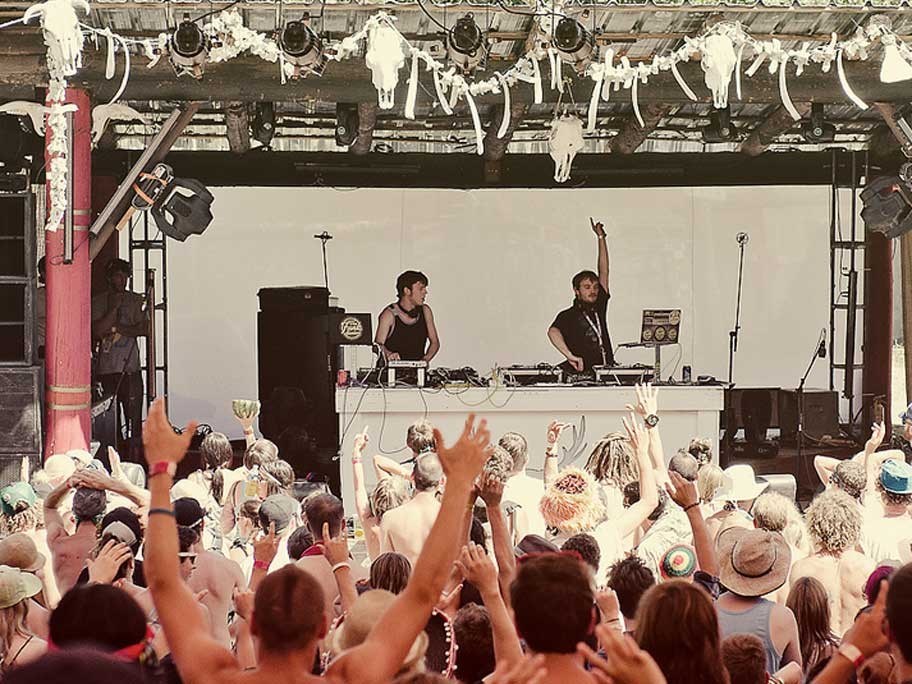 Funk Party The Funk Hunters start the weekend off with a whole lotta bass at the Shambala Music Festival in August.

Anyone at the Shambhala Music Festival this year might have seen two very different sets by Vancouver DJ duo the Funk Hunters. The first was an hour-long opening set made up of bass-heavy remixes and the other was an hour and a half of freestyle funk.

Alas, these are the two split sides of the Funk Hunters, a.k.a. Nick Middleton (Outlier) and Duncan Smith (Dunks). Normally their sets are fusions of both — and just about every other style of music in existence (check out their dubstep remix of Neil Young's "Old Man" on their website) — but when they get the chance, they'll dice up each side and indulge.

"Those are the two driving forces of the personality of our music," Middleton says. "Fun and funky and then on the other side we're trying to figure out how to incorporate bass music at the same time."

Bass music, it should be noted, had a stand out year. Dubstep broke through to the worldwide mainstream in 2011. Middle-aged parents were made well aware of the term while Skrillex was nominated for five Grammy Awards. B.C. has become a hotbed for this culture — Kelowna has produced several world-renowned dubstep producers and Shambhala is a wildly popular event on the summer North America festival circuit.

For acts like the Funk Hunters, the world is opening right up.

"It's opening up more avenues for people," Middleton says. "With that I think comes a lot of criticism but I'm optimistic about it. I think it's a positive thing... It brings more people into our culture and it means the smaller festivals are going to be busier. More people are buying music. More people are attending shows."

While they don't create dubstep, they are heavily influenced by it and have been experimenting more with the sounds, mashing it with the funk they're so attuned to.

If anything, it's a smart career move. They've already had a stellar year riding the crest of the electronic wave, having just returned from a five-week tour of eastern Canada. Last December they were on a month-long tour of Brazil followed by the first ever Ghetto Funk Crew Tour, alongside several other DJs on the Ghetto Funk label. They opened up for RJD2 during the TELUS Ski and Snowboard Festival in April. In the summer, they played every big festival along the West Coast — Shambhala, the Bass Coast Project, Rifflandia.

Next year is shaping up to be more of the same: another go at Shambhala, a European tour in May and a turn at Burning Man in August.

Not bad for a couple of island boys who've only been in Vancouver for a few years. Middleton and Smith met on Galliano Island and, discovering a shared taste in music and an enthusiasm DJing, they started throwing parties, but the scene eventually became too small. It became harder to find underground music and, as music junkies tend to do, they left for a town with more to offer. So they landed in Vancouver.

And thus became the Funk Hunters, named from "a literal hunting of funk" music in album crates at record stores. It's taken them virtually no time to find an audience — they seemed to land in Vancouver at just the right time, as the bass music wave was just beginning to swell. They've been regulars at most festivals in the region and frequent faces in the Sea to Sky.

Why? Because their appeal extends well beyond the bass music scene. In short, they make people dance. No one set is ever the same. Their gigs are almost entirely freestyle and the mashups are done on the spot. They can make the party and will shape the set depending on how the crowd interacts with the music.

"It's all a matter of what people want to hear," Smith says. "If they're wearing some brighter clothes, some funkier hats then, you know, we'll drop some funkier samples."

If the crowd has a mellower vibe, they'll cater to that. Case in point: the New Year's Eve Celebration in the village this year. The Funk Hunters are headlining at an event with far more children than they're used to. Expect less gritty dubstep and a whole lot of funk.