If you play music, will they come? 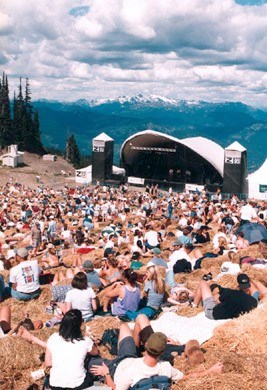 In past summers Whistler has seen quality Canadian artists such as Spirit of the West, Chantal Kreviazuk, Colin James and the Rascalz gracing the stages. This season, however, you’ll have to make your way into the bars to catch any acts remotely of interest to the 19-39 crowd.

The exception to that will be Skatespace in early August, produced by Kristen Robinson of Resort Communications Group. Skatespace, a competition and celebration centred around the growing skateboard population, made its debut last year in the resort. The event garnered more positive attention than anticipated and the municipality and Skatespace organizers are shelling out $30,000 this year to upgrade Whistler’s skate park and ensure its growing success.

Much of the hype is due to Robinson, who knows how to throw one hell of a party. She’s also the producer behind the massive music lineup for the Whistler Ski and Snowboard Festival, which in the past has included Econoline Crush, Swollen Members and Nickelback, just to name a few.

Robinson’s line up for Skatespace is a little more limited. After all, major recording artists don’t seem to be lining up to perform on skateboard ramps. She is, however, determined to bring in some of the best from Whistler and Vancouver and offer a little variety to the resort’s outdoor entertainment.

Robinson has also been involved with the long-running but now defunct, Summit Series, organized by Tourism Whistler. The weekend-long concerts featured both family and non-family entertainment, and were definitely highlights of the last four summers. However, Tourism Whistler has said the Summit Series is just too much of a financial risk. Considering the unpredictability of Whistler’s weather and the sub-alpine location, that’s understandable.

But has Tourism Whistler found another way to bring those lost dollars back to the resort? Are they offering up any other ideas of how to retain the interest of the 20- and 30-something crowds?

New to Tourism Whistler’s ventures this season will be the First Nations Festival in August, a music, art, dance and educational showcase of the region’s First Nations people. The aboriginal tourism industry is definitely growing, but this sort of festival is again aimed at families. There isn’t much to excite the 20-30-something music fan.

Robinson is quite open about her disappointment over the cancellation of the Summit Series. Although she has Skatespace to keep her occupied for a portion of the season, she has headed off to the Calgary Stampede this week to take in the entertainment at one of Canada’s biggest summer events, and bring back some fresh and inspired ideas for Whistler.

"You look at something like Canada Day on Grouse Mountain," Robinson says. "There’s an opportunity where’s there’s a big promotion. Molson Canadian spent some money on it so the ticket price is right, and they attracted over 10,000 people this year. They had their share of troubles for uploading, which is similar to what we used to experience when we held the Summit Series at 6,000 feet (on Whistler Mountain). But that’s why Base II became so appealing. And we could potentially facilitate 10,000 people at that sight.

"If you look at Grouse last year, it was snowing up top and crappy, but they still had 3,000 people. Yes, weather plays a factor, but I think it’s more about momentum. What’s been lost here in the summer events is you just start to develop something like Summer Sessions, and its getting bigger and establishing a name, and then it just goes away."

Robinson had been considering alternatives to the Summit Series, looking for a profitable way to bring some big names to the resort. But where do you house such an event? And more importantly, if you supply the music, will the audience come?

Take the Bif Naked/GOB concert at the conference centre, part of last year’s WinterStart Festival. Two high profile names. it should have been a no brainer sell-out. Instead, only a few hundred people were scattered through a venue that holds up to 2,000. Why the no show? There doesn’t seem to be an obvious answer. But Robinson has to ponder that same risk when considering future independent music events.

"Whistler-Blackcomb and Tourism Whistler aren’t necessarily in the concert business, and that’s fair enough," she says. "But I also think the opportunity to do something in the alpine exists. It’s just tough to find a venue. If I, for instance, brought in a mid-size band like Templar, where am I gonna put them? And if we did find somewhere for them to play, then you have to get hotel rooms and that sort of thing. Where am I possibly going to make money?" she laughs.

Entertainment really is dictated by money in a resort that can attract thousands of day skiers from Vancouver, but only a fraction of those visitors would make the same trip for an evening on the town. Whistler residents obviously have to make up a large part of the audience. The trouble you often run into, as Tourism Whistler and many night club managers can attest to, is ticket price. Because clubs in Whistler are relatively small, you have to tack on a higher admission charge in order to cover the cost of the musicians. Sometimes that doesn’t seem to be a problem. Take the Swollen Members show at Garfinkel’s a few weeks ago, for example. The room was sold out by 10:30. But just a few weeks prior, Treble Charger, BMG artists with a gold record who have sold out Whistler venues in the past, saw only half the numbers at the very same club. A head-scratcher for sure.

Garfinkel’s has decided to take advantage of the large hip hop audience in the resort with its revised Monday nights, The SPOT. Swollen Members was the kick off to a promising and consistent entertainment lineup.

"There’s really no one else out there doing this right now," says Garf’s booking manager, Adam Harris. "And there are people who will come out every week, or every other week, to see it. There are a lot of people who aren’t interested in seeing AC/DC tribute bands, or even rock bands or alternative acts. They want their live hip hop and rap.

"We are still trying to book other types of bands when they come our way. But there are a lot of factors. We have to rely on when most of these bands happen to be playing in Vancouver, and what night they have available for Whistler and whether they’re the right kind of band for us."

Those factors aside, Garf’s is making a commitment to live music with its revised Live Wire Friday’s, featuring Whistler and Vancouver bands like Slow Nerve Action and Big Up. Internationally-known names such as Checkmate, Casual (from Souls of Mischief) and Maceo Parker are already confirmed for the roster, and Harris says there’s more on the way.

"I constantly hear people asking where they can go for live music," adds Harris, "but I can’t justify putting on a show on a Saturday night when the club is already going to be packed. Friday nights in the summer are a little different from the winter though…. We tried out the live music a bit last summer on Fridays and got a good response, so we’ve decided to do it every week this summer."

If you’re really hungry for live music on a Saturday night, you need only make the short trip to the north of the village. The Boot Pub may be small, but it’s doing its damnedest to ensure big quality live sounds. Every Sunday, and rotating Mondays and Saturdays the Boot stage is booked. New Punk Sundays have a small but loyal following, and there’s just no one else bringing in funky world music like this week’s Mighty Popo (see article) or jam bands like Umphrey’s McGee.

"Number one, I have a passion for (this kind of music) and number two, I hope everyone else understands and gets the idea of quality entertainment," says Boot manager, Paul McNaught.

McNaught agrees with Harris, in that finding the right band to play his room on the right night isn’t always easy. The Boot, however, is a little more flexible, and McNaught says he wouldn’t hesitate to cancel one of his regular Boot Ballet nights – their biggest money making evenings – for the opportunity to offer the right live music.

But as willing as McNaught is to please, he knows the bigger names may not necessarily equal bigger profits in the summer. Days are longer and it’s that much more difficult to get people off the patios and indoors. The potential timeframe for liquor sales is shorter and the clubs are relying on the bands to draw a crowd. However, even once people get to the door, that pesky price of admission sometimes makes them think twice.

"People have to remember, they have to pay the cover if they want to continue seeing live music," McNaught says simply.

It’s not a foreign concept or an unreasonable request. You wouldn’t walk into a Vancouver club to see the same band and not expect a cover charge. So why is it that many a doorman in Whistler has been scoffed at after informing customers, "That’s $10, please?"

Robinson, too, wonders why Whistlerites will shell out money for gas and all the extras of a road trip to Vancouver for a concert, but don’t seem as willing to support a show in their own backyard.

So here’s the question, Whistler: If there is live music, will you come? What would be your ideal concert lineup, location and ticket price? Tell me. Tell the bar managers. Hell, tell your politicians. It’s time to rock the mountains before this resort falls into a summer slumber.