Indigenous youth connect to the land through snow, skate and surf

Step into Boarder X, the special exhibit at the Squamish Lil’wat Cultural Centre (SLCC), and the first thing you’re hit by is vibrant colour.

There are bright hues emanating from skateboard decks, splashes of florescent colour beaming from canvases, and even bright screens transmitting action from the outdoors.

Borrowed from the Winnipeg Art Gallery—with one local addition—the show is the perfect fit for summer 2021. It might be fun and youthful—demonstrating how Indigenous people are connecting to their land through skateboarding, snowboarding, and surfing—but it’s also filled with important messages, some of which are particularly poignant as the country mourns the deaths of 215 residential school children.

“The SLCC really wanted to bring in Boarder X because it has a connection between Indigenous people across Canada and how they interact with their territory,” says Alison Pascal, SLCC curator. “Here we’re considered to be people of the land and our culture is a reflection of the land. As you can see, it’s been changing and changing over the years and we’ve been kind of adapting to it and involving new parts or new materials into our culture. And that also means that how we interact with the land is changing. A lot of our people are turning to snowboarding, skateboarding, and surfing to connect to it. What we really wanted was to bring in these elements to connect with the youth in our Nation.”

Pascal recently toured Pique through the exhibit—which is running until October 2021. Here are just a few highlights. 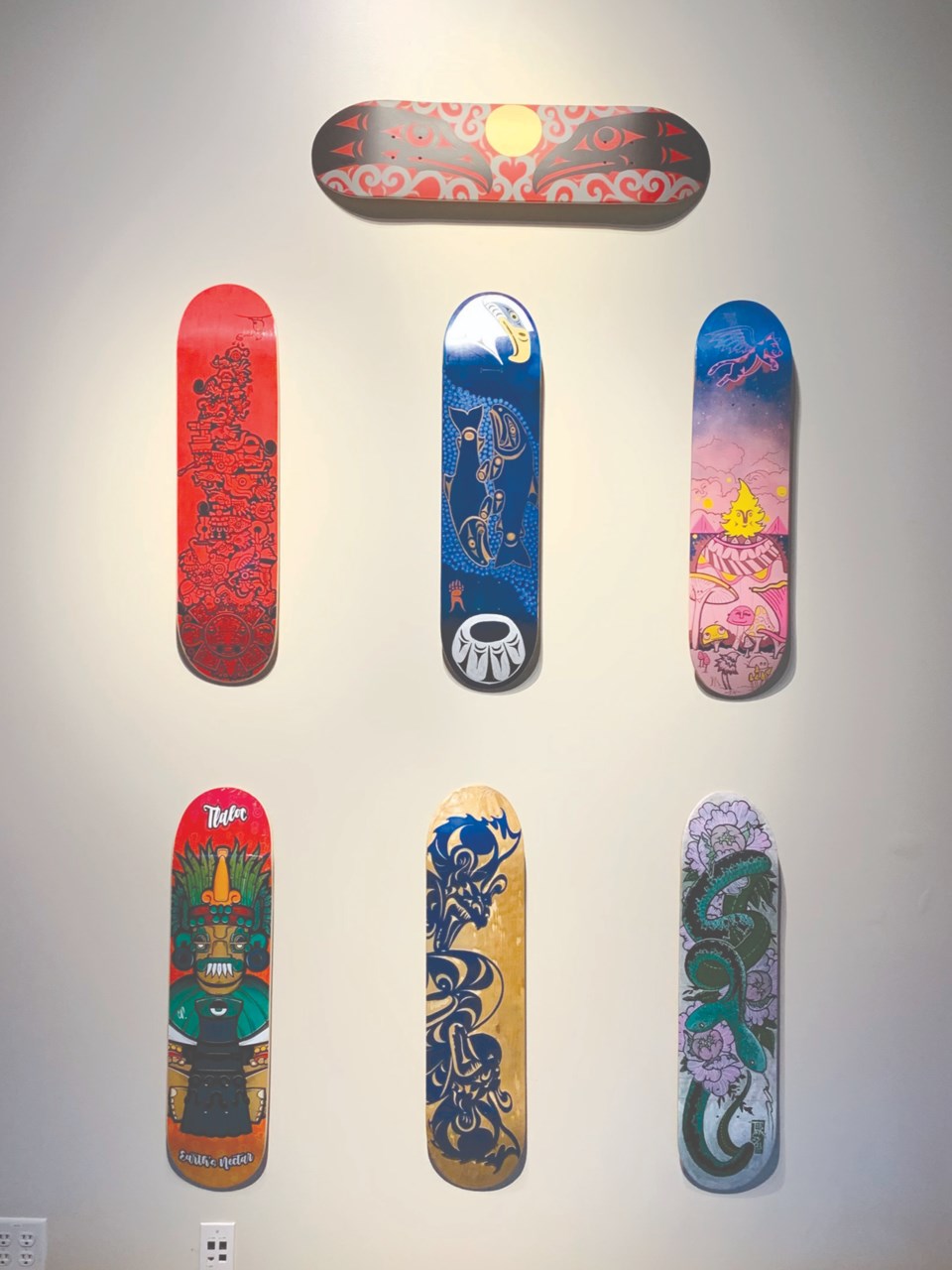 Formerly known as the First Nations Snowboard Team, the ILSA project, which doubles as a fundraiser for the not-for-profit organization, is the local addition to the show.

The skateboard decks on display, painted by Aaron Nelson Moody, Rick Harry, Carlos Soriano, Nalaga Avis Obrien, Trevor Mackay, Carrielynn Victor, and James Dalton, to name a few, are going to be auctioned off online from June 11 to June 21, which is both Indigenous People’s Day and Go Skateboarding Day.

“They’re done by renowned artists,” Pascal says. “The top one is one of my favourite artist and his name is Tawx’sin Yexwulla, Aaron Nelson Moody of the Squamish Nation.”

For more, or to make a bid when it opens, visit lifesportcanada.org/fundraiser. 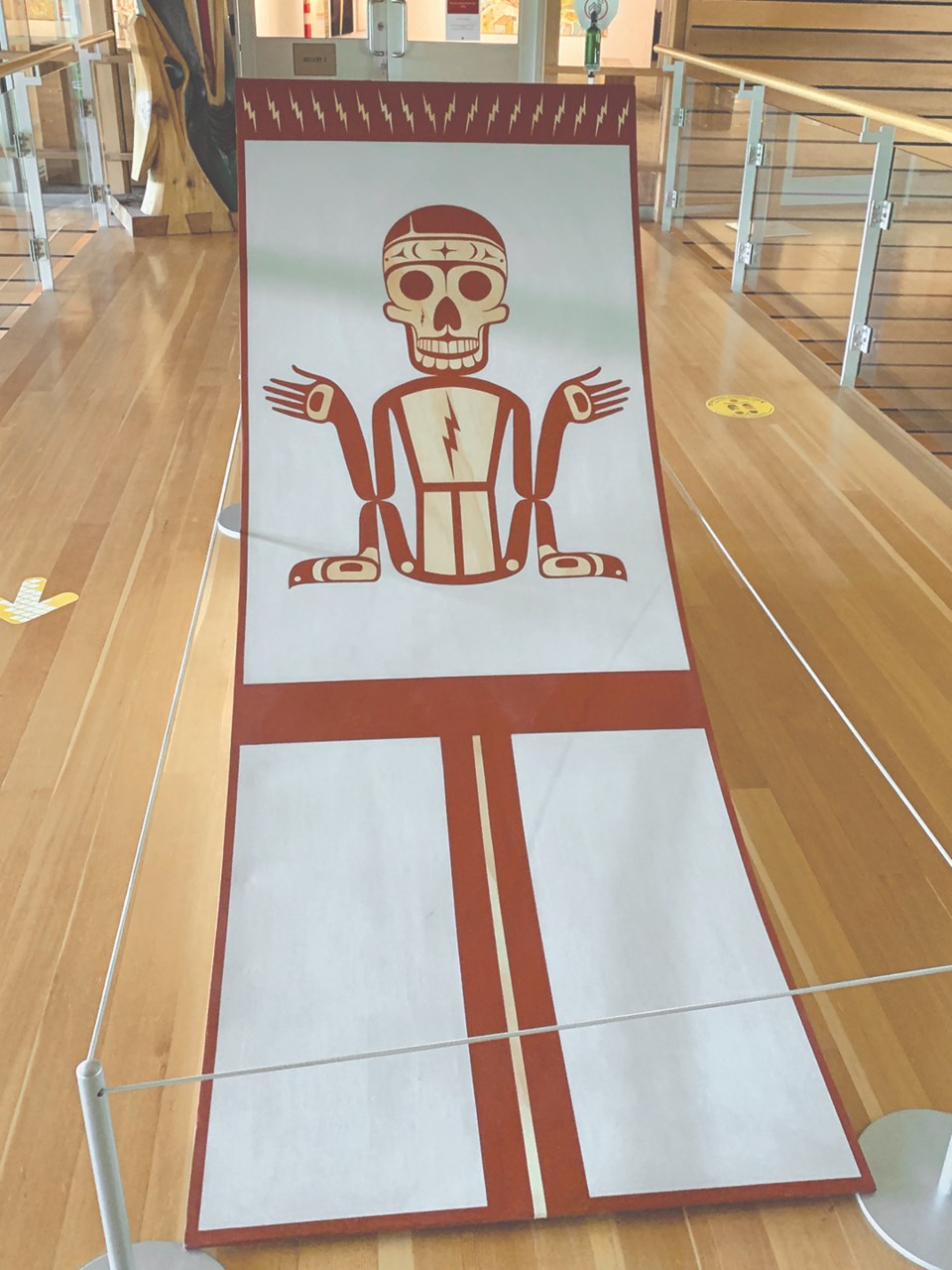 At the entrance to the rest of the exhibit sits a small pristine red, white, and sand-coloured skateboard ramp with a figure adorned on it.

Pascal explains artist Bracken Hanuse Corlett talks a lot about how skateboarding was an outsider sport when he was a kid on Vancouver Island and how he and his friends often used to build their own ramps.

For this piece “he chose the skull, as opposed to some of the more traditional Northwest Coast art because when the potlatch ban came, some of their art was misinterpreted as menacing or evil,” Pascal says. “It’s one of the things that contributed to the ban, so he wanted to put it front and centre so people remember that part.” 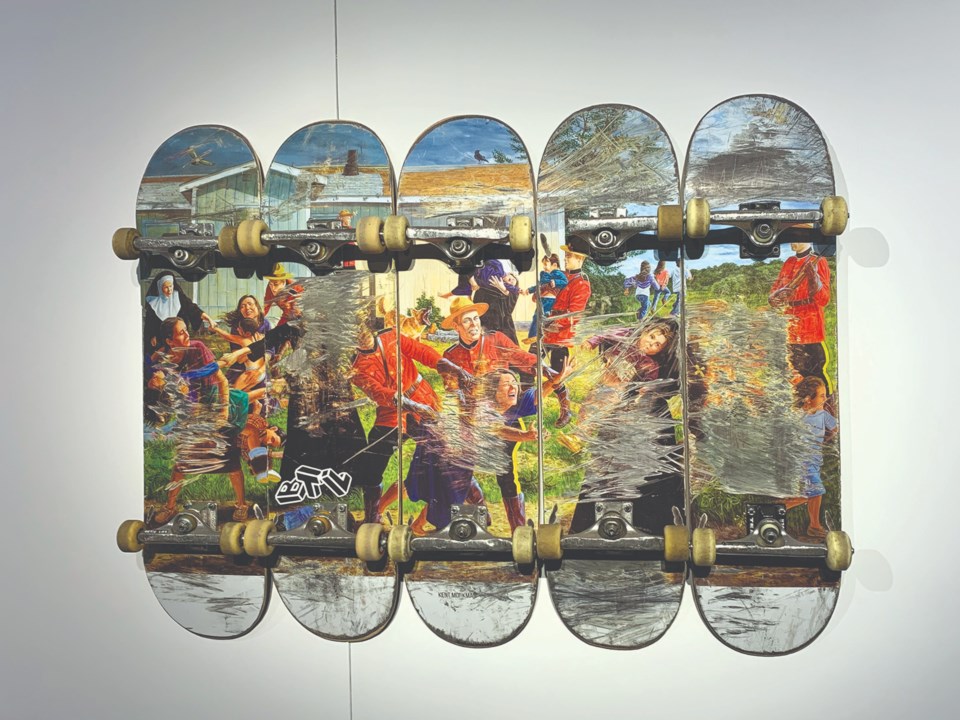 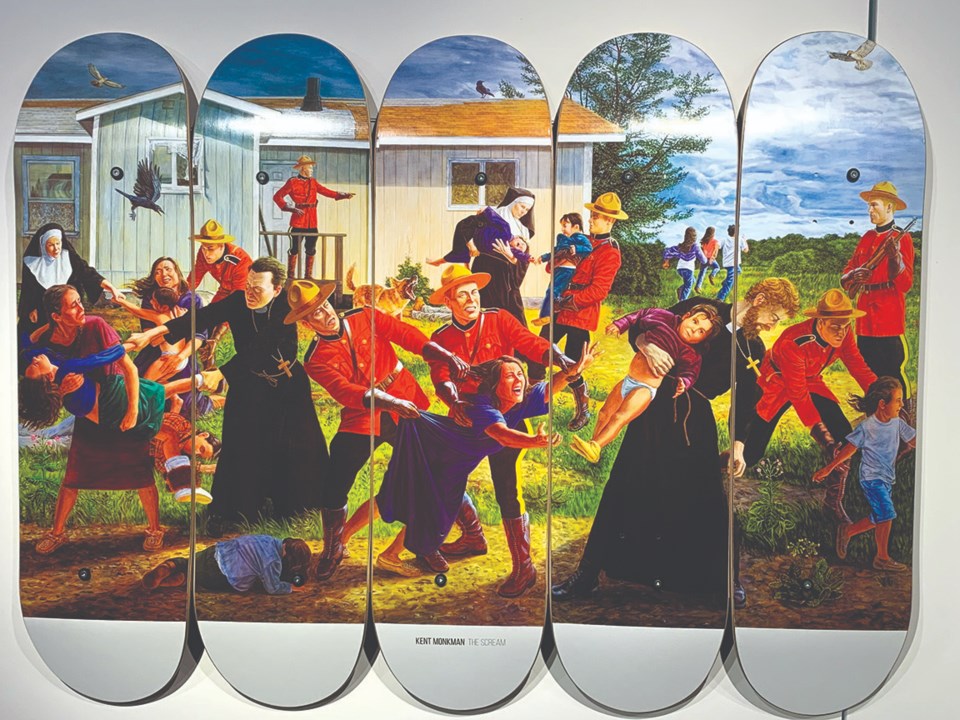 Arguably the most poignant pieces in the exhibit, the collaboration includes a set of five skateboard decks with a scene of children being ripped from their parents and sent to residential school.

One set includes tell-tale scratch marks of a board that’s been ridden and the other is in original condition.

“It’s poignant today because there was the recent findings of the unmarked graves, but it also speaks to all of the trauma and the intergenerational trauma that all Indigenous people face and how we do self-healing and growth. By working on ourselves we can start to work away at that so that we don’t need to be stuck in those hurtful cycles. We can work on it and grow from it. And that’s why he wanted to show the skateboards used. You can see some of the images are starting to be taken over in that we can take that back and replace it with something beautiful and helpful and spiritual and healing for ourselves and our family,” Pascal says. 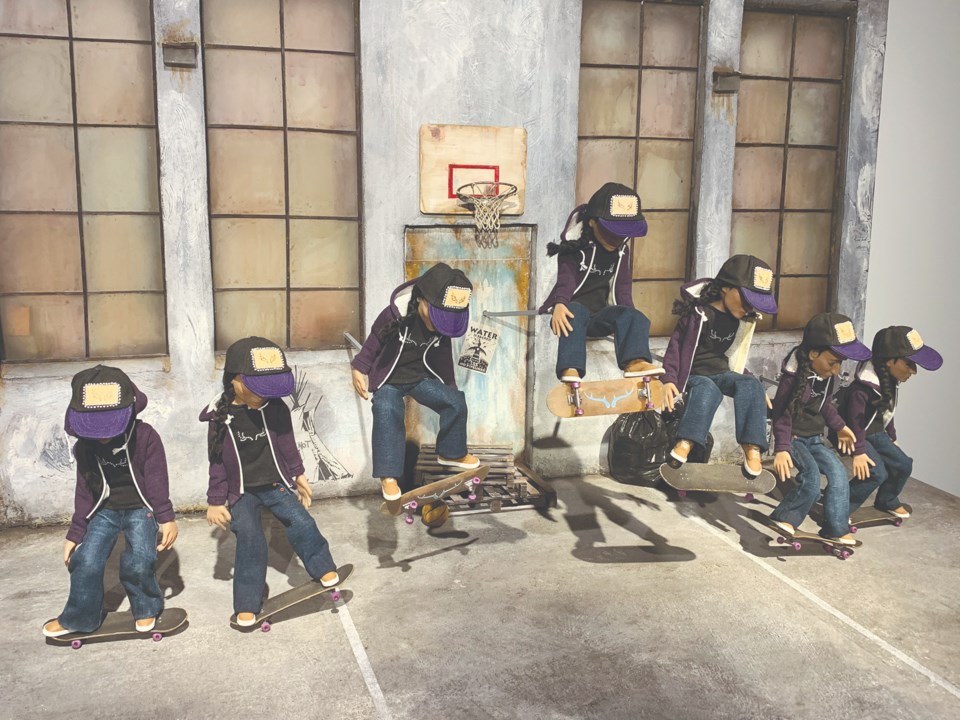 One of Pascal’s favourite pieces in the show is a fascinating sculpture depicting a woman mid-kick flip on a skateboard.

“In this piece, she’s addressing the issue of feminism in Indigenous people’s lives,” she says. “In Indigenous cultures, women are the matriarchs of the family, so a lot of the knowledge and a lot of the rights come down through the mother as opposed to current society, which is patriarchal.”

Aside from effectively conveying movement, the background of the scene also includes political posters adorning a wall of a back alley.

“This piece really highlights the strength of Indigenous women and also the idea that gender isn’t a fixed issue. Here she’s considering herself gender fluid. She was questioned a lot, as a young person that skateboards, ‘Is she a boy? Is she a tomboy? What’s going on?’ And she’s just breaking free of all of those in being a skateboarder.” 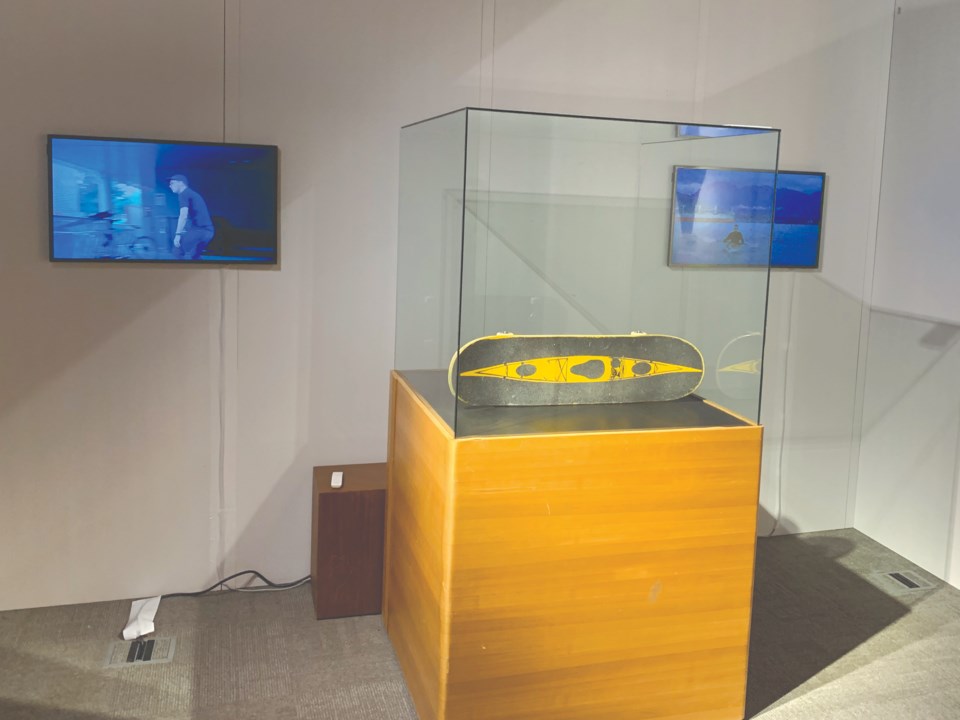 Igloliorte’s piece in the show features two screens playing short films. On one side there’s a skateboarder and on the other a kayaker practicing a roll. Between the two screens, encased in glass, is a skateboard with the design of a kayak on it.

The Inuk artist currently lives in Vancouver and teaches at Emily Carr University of Art and Design.

“He’s comparing skateboarding and kayaking and how you can see how the two movements are very similar,” Pascal says. “He’s really interested in both sports being self-propelled. So it’s a way of transportation that relies on himself. He’s also comparing different sports from his Northern home—which would be skateboarding—and activities that he would do in Vancouver.”

The SLCC is currently open Thursday to Sunday from 10 a.m. until 5 p.m.